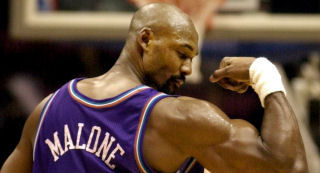 The saddest ballad in all of jazz comes out of Salt Lake City. In 1988, surging with the nascent, still pretty raw potential of the pairing of a young John Stockton (26) with a young Karl Malone (24), the city’s ironically titled basketball team pushed the soon-to-be NBA champion Los Angeles Lakers to seven games in a playoff series. It was reasonably assumed, the following season, that the Jazz were title contenders as the dynamic between one of the game’s best ever point guards and one of its best ever finishers sharpened, and both were anchored by a nimble 7-foot-4 Defensive Player of the Year, Mark Eaton. Instead, in what was both an early flash of the future of basketball and a harbinger of more than a decade of indignities to come, the Jazz were swept out of the first round of the 1989 playoffs by Don Nelson’s Golden State Warriors, who had Eaton running all over the place, struggling to keep up with a barrage of small, quick three-guard lineups.

The Phoenix Suns, Portland Trail Blazers, Houston Rockets, and Seattle SuperSonics all took turns dispatching the Utah Jazz over the next seven seasons, over which they won an average of 54 games. Regularly atop the sport in offense, the Jazz became a paragon of consistency so impressive that it, in any other era of the game, would inevitably break through. That did eventually happen, in one sense, come 1997. On the heels of falling just one game short of the NBA Finals in 1996, they finally made it there with a 4-2 Conference Finals victory over the Rockets the following season. Stockton, showing us another glimpse of what the sport would later be, took over in the closeout game, regular season MVP winner Malone receding into the background as the point guard abandoned his typical game-management style to score 15 points in the fourth quarter of a comeback win, topped off by an iconic buzzer-beating, game-winning three-pointer.

Winners of 64 games that season, the Jazz had toppled Hakeem Olajuwon, who was beginning to come down from a zenith that Stockton and Malone were now reaching: that of enduring so many years of crooked disappointment without ever losing their straight way to the top, and then finally aggregating all the lessons learned in losing into one of the most powerful campaigns a team could hope to wage. The difference between Olajuwon and Stockton and Malone, though, was timing. While the duo hit a stride best known as a championship strut during any other era, Michael Jordan, Scottie Pippen, and Dennis Rodman were doing something so absurdly, theatrically great that it inspired the most-watched documentary series in the history of sports more than twenty years later. In both ’97 and ’98—when the Jazz won 62 games and marched back into the Finals by emphatically sweeping the earliest iteration of the Shaq-Kobe Lakers—Utah met their demise at the hands of the Bulls, and ended up a title team without a trophy.

But the cruelest part of the story was yet to come. With the Bulls ripped apart in the lockout-shortened 1999 season and Malone again the MVP winner, the path to the championship was as clear as any team’s has ever been. Right at the outset of the playoffs, though, they were caught up in unexpected wiring, falling behind 2-1 in a five-game series against the upstart Sacramento Kings. Led by a center and a power forward who often played like point guards in Vlade Divac and Chris Webber, the Kings were such a perfectly generational challenger to what the Jazz had so long built that they seemed written for this basketball tragedy by the pen of God. Particularly existential was the matchup between Stockton and Jason Williams, a rookie play-maker with similar passing instincts and size, but a definitively modern sense of style that couldn’t contrast more with Stockton’s deliberate lack of flash, cultivated to maximize his competitive edges.

The Jazz barely got past the Kings, and were then knocked out by a Blazers team that would go on to eliminate the Jazz in the second round of the next season’s playoffs as well, this time with Pippen’s help. After that, Stockton and Malone never made it out of the first round again; their thesis had failed. The undersized point guard who rolled up to the stadium with an eight-dollar haircut in a mini-van, and the power forward who wore flannel and a hunting cap—neither of whom ever spoke a memorable word, and they meant it this way—combined for a yeoman super-attack for longer, and more successfully, than any two players had ever combined. Malone is the second all-time scoring leader in the history of the NBA, while Stockton has probably unbreakable No. 1 all-time standings in both the steals and assists columns. They never slayed their white whale, though, and are less remembered as a result. No one has ever been so close to the top for so long without winning it all. Averaged out over a fifteen-year period, their contributions were greater than anyone else’s, but at no point during that time were they good enough to beat everyone. The saxophone wails for them.