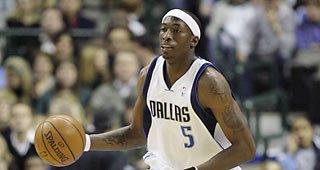 Josh Howard had a bad summer. This was 2008. Before Game 3 of the Mavericks’ first round series against New Orleans, he admitted to occasionally smoking pot during the offseason, and after Game 4, with Dallas down 3-1, he passed out fliers for his upcoming birthday party in the locker room. In July, he was caught on camera denigrating the national anthem and in August, he was arrested for street racing. “Josh really is a good guy with a great heart,” Mark Cuban said in defense of his starting swingman. “He just doesn’t do a good job of showing that side of himself publicly. We will work on that.”

The most damaging story out of that summer was the anthem thing, a tossed-off remark exploded into a controversy due to the rum-dummy-dum American dogma that conflates anything short of solemn weeping in the presence of the stars and stripes with high treason. Howard’s transgression occurred, of all places, at Allen Iverson’s charity flag football game, where he was caught on a juddering cell phone video saying “‘The Star-Spangled Banner’ is going on. I don’t celebrate that s---, I’m black.’” This was objectively not a big deal. It wasn’t a proto-Kaepernickian statement of protest. Howard was just joking, with a familiar gleeful grimness a lot of black people use when they’re talking about America, that he’s no fan of The Flag Song. If you take into account that America is not really for black people, and is in many aspects actively against them, you might afford them the narrow privilege of rolling their eyes at the corny hymn without rebuke.

But of course that is not the way things work—now or in 2008. Mark Cuban took to his blog and posted some of the hate mail he received in the wake of Howard’s comments. Cuban has since deleted his post and its reprinted racist diatribes have disappeared into the internet’s dark maw, but we do know, from a contemporary Dallas Observer column that it included phrases like “dumb coon n----r” and “throwing spears in Africa.”

The same column expresses a less-blantantly-racist but still blinkered view that Howard had no right to complain about America’s cruelty toward black people because he’s a rich basketball player. “The role of disenfranchised minority fits him about as comfortably as John McCain promoting himself as the candidate of change.” This is consummately oblivious white liberal sentiment, right down to the McCain slam, that elides the fact that Howard grew up dressing next to the stove in his single mother’s unheated apartment, the borders of his impoverished Winston-Salem neighborhood so strictly delineated that he didn’t even know that Wake Forest, the college he would later graduate from, existed in the same city. It also implies that rich black athletes are totally insulated from the terrors and discomforts of being black in America. (Ask Thabo Sefolosha or Sterling Brown about that.) It strikes the same tone as claims that would circulate several months later, that Barack Obama’s election had ushered America into its post-racial era. It’s an understanding of racism as something that happens, like a lightning strike, rather than something that is, like pollen in the springtime air.

The Observer column wasn’t an anomaly. Bad takes abounded. Further point-missing: a piece about Howard’s off-guard candor from The Plainview Herald carried the headline “Josh Howard and his tour of stupidity.” Stephen A. Smith called him “the [Mavericks’] resident idiot.” Basketbawful, a blog whose name seems to a contradict the fact that it was moderately influential at the time, dismissed Howard as a clown before getting bent out of shape about Cuban exposing the email addresses of a bunch of bigots. Blogger turned sports law expert Darren Heitner exasperatedly asked “what is Josh Howard doing saying this crap on camera?” Even J.A. Adande, while acknowledging that Howard was speaking some kind of truth, veered into respectability politics territory by arguing that Howard’s penchant for partying and smoking weed gave him “a termite-ridden soapbox.”

Of course Howard wasn’t standing on a soapbox. He wasn’t being interviewed by a reporter, or even all the serious. He was goofing around. What he said upset people mostly because they were programmed to get upset about it. A wholly unexamined how-dare-he reflex fired in the minds of a hundred sportswriters and talking heads. Some vague and virulent anger about disrespecting the troops and, um, our principles and ideals attacked the guy who said something churlish about the anthem, because that is what happens to guys who say churlish things about the anthem. Americans don’t have a talent for interrogating why certain laws exist, but we are very good at punishing the people who violate them.

The controversy eventually blew over. Howard wasn’t run out of the league for a single statement, or for anything else that happened that summer, but “I don’t celebrate that s---, I’m black” follows him around to this day. One of the first results that comes up when you google his name is a short piece Bethlehem Shoals wrote for D Magazine. Shoals is more thoughtful than most in his criticism, and he says “the real bummer is that this video made a mockery of Howard’s desire to speak his mind, to be an athlete who stands for something and makes us confront uncomfortable truths.” Fortunately, Shoals’s concerns would be addressed by the next generation of NBA stars. While players like LeBron, Wade, and Carmelo have a corporate sheen about them, they have also been pretty remarkable activists, passionately and pointedly describing the distressing reality of being black in America. They have made people uncomfortable, and created positive change.

Howard, crucially, wasn’t at the vanguard of this activist athlete movement. He wasn’t expressing a coherent politics or standing up for any particular cause. (Hell, he didn’t have coherent politics: “"I think like a Democrat but because of my tax bracket, I'm a Republican.") When he made his crack, it wasn’t the same thing as LeBron pecking out an Instagram post about police brutality or voter suppression. Howard was merely expressing casual anger, which is in some ways more discomfiting than when a player puts on their Political Speech hat and begins to explain themselves. Because it’s not an argument, it’s a half-articulated feeling. In the more compassionate America that modern, politically engaged athletes imagine, we might meet Howard’s joke with a desire to understand why he feels that way, or simply accept that black people have it tough in America and some of them might not be as enthusiastic about our precious displays of nationalism as most white people are. Instead, in 2008, we defaulted to lazy umbrage-taking and recrimination. Howard was a charlatan and a brat—at best, an imperfect messenger. But there was no conscious message. No outrage, no grievance, no stridency. Josh Howard was annoyed with workaday Rah-Rah America nonsense because he knew, like every black person in this country knows, that some folks are treated as if they are more American than others.