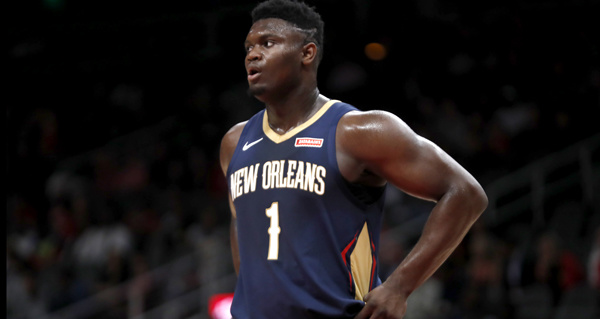 Zion Williamson is a really, really big guy. Simply huge! Last summer, when he was drafted No. 1 overall by the New Orleans Pelicans, various Twitter users made successful jokes about his tears of joy being lakes large enough for us normal-sized humans to cannonball into. No one, really, has ever been sized like this and also moved on a basketball court quite this fluidly, including LeBron James. Zion defies hyperbole—he is an anime star playing a human sport, he is an actual real-life supervillain competing against people who rely on green screens to look anything like him. And understandably, his rookie campaign—cut short by both injury and pandemic—has created a TV ratings surge for his usually floundering, low-profile franchise, and led to a broader excitement about his full career; a fervor unseen for such a youngster since, again—and this is said with a sense of history—LeBron.

Recently 20 years old, he is now also the star who the NBA most relies upon as it returns to television with the pandemic still raging, peddling a stranger, more austere version of the product its audience is used to. With James and Kawhi Leonard likely to play it safe until the postseason, and Steph Curry and Kevin Durant not involved in the league’s limited Orlando-bound “bubble,” all eyes will be on Zion. It’s quite the sudden performative pressure for someone with 19 professional games under his belt, but there’s simply no other star like him at the moment—Giannis Antetokounmpo has never truly caught on outside of hardcore NBA fans, and James Harden is perceived as a grating, rule-manipulating wonk. The NBA’s most precious star is also its most unproven, and given all that his body is demonstrably capable of, it seems that he might just prove anything when he’s out there. In the NBA’s darkest days there are also the formative exhibitions of a man who is potential himself—impossible to reduce, even harder to anticipate.

Hence, the panic about Williamson’s recent exit from the “bubble”—a recently transformed word that may one day soon lose its scare quotes. In order to attend to an unspecified family emergency, Zion was out of this expensive ad hoc society for eight days, taking COVID-19 tests for each of them, and is now sequestered upon his return, ineligible to rejoin the team until he scores a few more negative results on his daily tests. Zion is more than likely to be available for the Pelicans’ contest against the Utah Jazz on Thursday night—a game that, by no accident, is the first official match-up of the reborn season. The NBA has been unflinching in the execution of their virus-related safety protocols, but, given how much is riding on Zion, you get the sense that if there ever was a reason to go lax on those rules, getting him out onto the court would be it.

Zion’s Pelicans face a steep challenge in their eight remaning regular season games, six of which are on national TV, as they scrap for a final Western Conference Playoffs spot that's currently held by the Memphis Grizzlies. The Grizzlies are 3.5 games on top of New Orleans, and have Ja Morant; an unusually energizing presence who would be the standout celebrity rookie in any other season, and in fact was until Zion started his season in January, reminding everyone that he is a meteor who challenges the very foundation of the surface he’s soaring towards. This kind of power doesn’t mean Williamson actually knows how to win, of course; everyone, even LeBron and even Michael Jordan, needs time to learn that rarest of skills.

But, barring a breakdown in physics as we know them, entertainment is guaranteed. Regardless the outcomes of the games he plays in, Zion is assured to give panic attacks to the engineers who design the NBA’s rims as he finds and punishes the hoop with an ease that makes you wonder if he’s come to us from the future, or from another planet, or from the collective fantastical daydreams of people who love this sport so much that they’ve seemingly  imagined this man into existence to pursue newer levels of it. There is really just not that many opportunities to watch a player like this, making his seminal mark upon the sport; it’s been 17 years since the last one.

And with distraction from the world—rapidly racing toward frightening breaking points with all its escalating, interlocking political and health crises—harder than ever to find, and activities to find that distraction in so much harder to take on, televised sports couldn’t come at a more watchable moment. Upon Zion’s mythologically large shoulders rests the ability of many millions of people, tuning in for these games, to know not just the familiar comforting cadences of the game, but an escapism that’s been lost; it is him who the league, and everyone who knows the sport, is banking on to let us feel again, if only for the moments that he captivates us, that anything is possible.