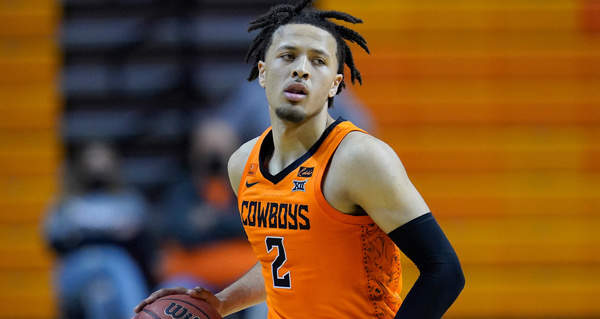 A cult hero among draftniks for about three years now, Cade Cunningham has been as good as expected in his first handful of college games.

He ended up the second-ranked recruit in the 2020 high school class[1] because Jalen Green had a killer senior year at Prolific Prep but remains widely considered the crown jewel of a highly rated 2021 draft class, currently ranked first on ESPN’s top 100.

Given the prolificacy of his passing at Montverde Academy, the Texas Titans and the United States National Team U19, where he established himself as the sort of genius who can anticipate passing lanes a split-second before they come open, his 22.5% assist rate in his 266 minutes at Oklahoma State might stand out as a tad disappointing, but it says more about the quality of shooting around him than any potential misevaluation regarding the quality of his court vision.

The six-foot-eight lead ballhandler has stood out more as a scorer. He has averaged 23.3 points per 40 minutes on 55.6% true shooting, while logging 29.4% usage.

With Isaac Likekele, whose calling card is as a bulldog on-ball defender, by his side, Cunningham hasn’t been relied on to check opposing ballhandlers as regularly as he did with Montverde Academy, where he proved himself capable of holding his own defending the point of attack, despite his size.

Primarily an off-ball defender so far at Oklahoma State, the 19-year-old hasn’t looked particularly special in terms of flying around to create events but has, however, really impressed with his impact in the hidden areas of the game.

The thing about Cade Cunningham is not that he's just the perfect ballhandler prospect but he also boxes out his own man, steps up to deny the opposing ballhandler a path to the goal, guards with his arms up, clogs driving lanes, and cuts. He's a superstar without the ball too.

The Arlington native remains very impressive in pick-and-roll for someone his age, able to attack either side of the pick and manipulate the on-ball defender through the screen via in-and-out dribbles, low crossovers, hang dribbles or hesitation moves, as well as playing with pace to engage the big defender or draw a weakside defender in before hitting the roll man over the top or finding a spot-up shooter.

The full versatility of Cunningham’s passing hasn’t been in full display against this level of competition yet, but besides tossing up lobs on the move and hitting the roll man over the top, he has shown in the past to have developed a ridiculously deep arsenal of passes in pick-and-roll and in transition; hook passes to the corner, shovel passes to the wing, no-look passes with a numbers advantage, crosscourt passes against the momentum of his body in middle pick-and-roll, well-timed pocket passes, lobs off putting the on-ball defender on his back and engaging the help defender to free up the roll man, and hammer passes to weakside shooters off deep dribble penetration.

Cunningham had superstar teammates around him at Montverde but very much does not at Oklahoma State. With his supporting cast often bricking his potential assists, he has become more aggressive looking to score off the ball-screen than we had seen from him in the past, currently leading the Big 12 in total scoring.

Cunningham has taken almost half of his live-ball attempts at the rim and earned 6.8 free throws per 40 minutes.

He is not much of a force getting downhill or turning the corner but mixes in hesitation moves and changes of speed to get by the big man dropping back, as well as leveraging his chiseled 220-pound frame to maintain his balance and his momentum forward through contact.

Cunningham can go up with power off one foot with space to leap unimpeded but has most often looked like a below the rim finisher in traffic through his first couple of months in college.

Though mostly an up-and-down finisher, Cunningham has shown some versatility around the goal, impressing with his comfort going to his left hand for toss-up finishes and his body control to jump-stop on a dime and overextend around a charge drawer or side-stepping around a rim protector parked between him and the goal, as well as using his off arm to shield the ball from a shot blocker mid-air or shot-fake to bait a big man out of his feet.

He hasn’t been as efficient away from the rim, having missed over two-thirds of his 67 such attempts, but has flashed enough good moments as a shot-maker off the bounce to remain optimistic about his potential as an all-around threat.

Cunningham is crazy smooth and with the aid of the screen, he can get to his spots and rise for one-dribble or two-dribble stop-and-pop pull-up jumpers where the defense can’t do much but concede.

We haven’t yet seen much from him in terms of creating separation for long-range bombs via side-steps or step-backs, but Cunningham has shown glimpses of being able to hide behind the screen to launch a three-pointer off the pick-and-roll, with seven of his 11 three-point makes so far unassisted.

His first step is only so-so out of a dead dribble and it’s rare to see him blow by anyone, but he is resourceful enough to act as a capable scorer in isolation thanks to his ability to play through contact, as well as his handle and his body control.

Cunningham is not super shifty but can change directions by going behind the back in a pinch, half-spin one way and turnaround the other or crossover between the legs into a pull-up. He is able to create separation with step-backs in mid-range and a pull-back move from long-range, with his high release on pull-ups making it tough for opponents in college to contest effectively.

But Cunningham stands out more as a scorer from the in-between area with the versatility of his floater package, which we haven’t seen fully unleashed at Oklahoma State yet, as he showed in the past a knack for launching them in a multitude of ways; runners, teardrops off euro-steps, lefty floaters off a jump-stop, touch-shots off the catch on cuts, push-shots off a shot-fake to get his defender to flyby.

Cunningham has, however, struggled a little in terms of adjusting to the step-up in competition and the step-down in talent around him, which have reflected in his average of 4.4 turnovers per 40 minutes and his unimpressive 1.0 assist-to-turnover ratio. He is often seen protecting the ball in traffic but has been prone of driving into crowds, walking and bulldozing into the defender’s chest for a charge quite a bit over his first eight appearances.

Cunningham has been quite active looking to post-up smaller players. That’s something he often sought to do at Montverde as well.

And it’s not simply a device to facilitate offense for others on post-up to pass situations, as Cunningham has looked aggressive attempting to score with his back to the basket.

He was more likely to operate with a patient approach in high school, at times looking to set up a turnaround fadeaway jumper, but in college it’s been more quick hits where he either turns around quickly for catch-and-finish attempts or puts the smaller defender under the basket.

In his more deliberate moves, he’s proven himself capable of launching turnaround hooks with either hand.

Besides hunting for opportunities for a quick post-up, Cunningham can also be seen cutting from time-to-time. He stays active off the ball, with almost one third of his makes at the rim assisted.

Cunningham has proved, during his time with the United States National Team U19 at the 2019 U19 World Cup, that he doesn’t need to monopolize possession of the ball to make others around him better, able to act as a connective tissue to create for others against a scrambling defense as well, with kickouts and drop-offs off engaging the last line of defense on straight-line drives, extra passes around the horn to keep the offense humming and touch passes off cuts.

After missing 13 of his 14 three-point shots in the 2019 U19 World Cup, he looked much improved as a shooter last season and continues to look like a plausible threat on spot-ups during his time with Oklahoma State.

Cunningham catches on the hop and fully extends himself for a high release. The speed of his release has room for improvement, but he’s shown to be a good open shot shooter in college – having hit 11 of his 30 three-point shots so far.

Cunningham bends his knees to get down in a stance and can slide laterally to stay in him to stay in front of different types out in space. Despite his strong frame, it’s rare to see him to chest up to contain dribble penetration through contact via physicality, but Cunningham does manage to overwhelm smaller opponents from time-to-time by guarding with his arms up near the goal.

He hasn’t been asked to defend the point of attack as much as he did at Montverde, where it seemed like a point of pride to prove that he was able to do it well despite his size, but has shown to be attentive to his responsibilities icing ball-screens the few times he has done it at Oklahoma State.

Cunningham has really stood out as a help-defender.

His average of 2.4 (steals + blocks) per 40 minutes and his 12.9% defensive rebound rate might be a tad unimpressive, given his anticipating skills, but he stays active away from the ball and makes an impact in the hidden areas of the game – getting his length in the driving lanes, coming off the weakside to challenge shots at the basket, shadowing post-ups hunting for an opportunity to intervene at the last second, making preventive rotations that deny the opposing ballhandler space towards driving all the way to the rim, and boxing out his own man diligently.

Cunningham played a little bit of center against Texas Arlington and has been the second biggest player on the floor for Oklahoma State in a quite a few possessions throughout the season. When the opponent has put him in pick-and-roll as the screener’s defender, he’s flashed the ability to approach the ballhandler in a stance, stop the ball and keep track of the roll man.

The possibilities for how to deploy him on defense appear to be endless.