Nobody's Supposed To Be Here 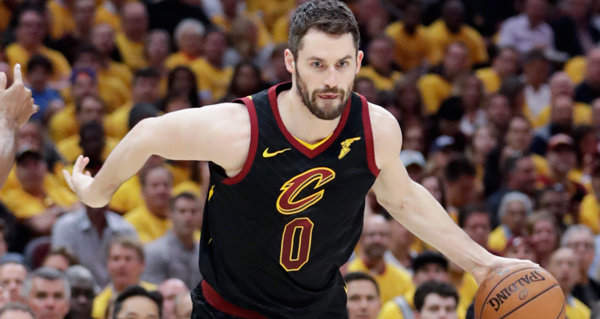 Everything about the swat was out of step. There’s Toronto, jogging back up the court in transition as the ref underhands it from the sideline to Kevin Love, approaching the baseline in a limb-heavy traipse, like he has every intention of walking past the pass, the inbound required of him, the court, the game, down the tunnel and out into the eventual Tampa twilight. When it comes, the indifferent slap of his hand against the ball, and Love keeps walking, turning his head to watch Stanley Johnson rush for it, scoop it up and slip it out to Malachi Flynn for a quick uncontested three, it’s as if the game split. Diverged into parallel presents.

One, where Love, as the last holdover from a 2016 title, has gone from golden reminder to uncomfortable remnant and the other, the Toronto Raptors on the Gulf Coast of Florida in a season so muddied with malady that when trying to determine its necessity or authenticity, things go brackish as the coastal runoff and swaths of swamp tracts surrounding Tampa. Nobody’s supposed to be here.

Nobody knows that better than Love. When he signed his four-year, $120 million extension, it was to a Cleveland team that, as battered and breathless as they were after being swept by Golden State in the NBA Finals, was just starting to cope with the second departure of LeBron James. Two and a half seasons later and Love is the only one, save for Matthew Dellavedova, gone and back again, who can remember what those kinds of bright lights felt like.

Part of Love’s reticence, borne out in bursts of visceral, occasionally bizarre frustration the last two seasons, is in shouldering the role of sole veteran. In the first year of his extension he had Channing Frye, John Holland and George Hill to look to as much as measure against, by the next year they were all gone, sloughed away by Koby Altman, intent on building a team with a new future. To do that a franchise needs an excess of years in front of a career, Love suddenly became the default adult in the locker room.

In a landscape as accelerated as the NBA there is no such thing as getting to age gracefully. A handful of careers are afforded the kind of prolonged autonomy and reflexively renewed respect it takes to be treated as integral to something like franchise legacy, and it usually comes from a mix of pure talent, constant efficiency and the luck of having a body that against all odds has remained unscathed. Love has been pushing uphill against injury since his sophomore season but beyond that, in becoming necessarily malleable to what the Cavs needed from him, forfeited some early avenues to longevity. In his first season with Cleveland, Love’s points per game dropped from an average of 26 to 16, not because he’d lost a step but because on a roster with James and Kyrie Irving, it wasn’t up to him to shoot the lights out every night. Love was still beating out Cleveland’s dedicated bigs Timofey Mozgov and Tristan Thompson for boards but his total rebounds and assists also took a distinct dip. It was understandable, he was playing his part, an effective supporting contributor meant to make room for James and Irving.

What James got from Cleveland’s title was permission to put the past gracefully, finally, behind him, Irving pocketed his chip as collateral and left, but Love never thought to use it as an exit because by then his road had so efficiently narrowed.

None of a past that Love was a willing and active author of gives license to the kind of outright tantrums he’s had this year. Storming over to Colin Sexton as he dribbled out the shot clock earlier this season was like watching someone get out of their car in traffic to park somebody else’s just because they didn’t like their technique — Sexton was taking forever but it wasn’t Love’s call, he doesn’t play that position. Even the most cantankerous of vets will wait until the whistle to call their young guys out but Love, cutting cross-court with his arms up and clapping only to heave it hard and overhanded to Cedi Osman, left his team then in the same lurching space between gameplay and barrelling awkwardly through competition’s 4th wall (even in a season where that wall, and how it warps our perception of what’s actually important, could stand to be shattered now and again) that he did in Tampa this past week.

While Love is quite literally out of step, unable to figure out how to slip back to a role where he’s needed, it’s these deeply personalized outbursts that underscore Love’s unwillingness or inability to sync with Koby Altman’s dream for a next-gen team. Each hopeful burst the Cavs have been given this season — the train-heist acquisition of Jarrett Allen in James Harden’s trade to the Nets, the mutually relieved sigh of two sides when Andre Drummond left for the Lakers, an energetic and willing young roster straining to figure things out — have been bogged down by not just Love, but the past he mires them in.

And it’s mutual. When looking at players at Love’s level, from Love’s draft class, his career these past few seasons is the only one to not just stall, but regress.

What Serge Ibaka did in using the momentum of a championship to run it back with Toronto the mirrors Love’s own decision to stay in Ohio, only Ibaka saw the leverage that he had in this past free agency, when the Raptors wouldn’t guarantee him more than a year. With the Clippers, Ibaka’s productivity has dipped likely only because he’s been without Kyle Lowry’s hand to feed him, otherwise he’s in a setup that doesn’t put any kind of pressure on him that he can’t shoulder. With the Hawks, Danilo Gallinari is in a parallel situation to Love as a vet on a young team carving out an identity, but with Lou Williams as the de facto veteran and floor leader Gallinari is freed up to support as needed. For Love, there’s a sense that he’s leap-frogged over several potential iterations of himself in two back-to-back seasons of uncertainty and injury, not yet sure on what he wants the next years of his career to look like while getting frustrated when he lands in the exact same place. The team moves forward and he, injured or unable, can’t. Love returns and the team has veered off in another direction. There’s no collective force, no rhythm, everyone is cramped, off-kilter, desperate to move with nowhere to go.

It’s a case where the eye-test is enough, it’s as bad as it looks. It would be the best for both sides if the Cavs stopped relying on Love as a kind of monument for what came before and cut him loose.

Love had requested a trade at last season’s deadline but the 19-20 season’s pandemic hiatus, the Bubble, and the rush to return to play this past December made hanging onto him seem the best bet for a team unsure of its footing. In terms of weight, Love’s salary isn’t as easily lifted as Drummond’s was, but both players share the same agent so precedent could offer the biggest helping hand. Love could look to what Blake Griffin did, leave money on the table in order to play the kind of basketball he’s better at; less minutes, but sustainable for a body that’s been through it.

Since Love’s extension in 2018, the league has seen so many shuffles, both in player movement and emphasis on an evolving, accelerated style of play, that it’s hard not to see him as a holdover without a clear next fit. But the time-warp of this season, its push to keep going at whatever cost, could offer Love a place on a number of rosters either hoarding players outright as a guard against growing thin, or teams looking to return to stability next season. The Nets and Lakers have the money, if not cap-space, to fold in a player like Love in the short term, while the Sixers, Trail Blazers, Knicks or Mavericks could opt to add him as support.

Championship teams come apart. Love and the Cavs both went on grasping at the pieces that were better off burning up in a return to the atmospheric realities of a league that, healthy or not, never stops. There is always an inversion point when the afterglow of a title run fades and nostalgia warps to something more desperate. Sometimes the hardest part is finally admitting it.