The Delight Of Summer League Randos 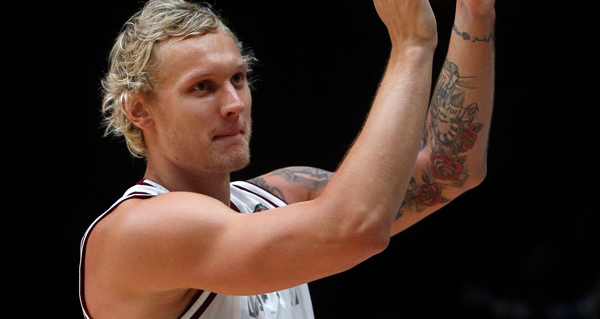 There are end of the bench gigs up for grabs. The first round rookies, sure, they’re figuring some stuff out but they’re operating with considerable leeway, throttling through gears they might need in a regular season they’re almost guaranteed to make. What could Jonathan Kuminga show the Warriors that would make them think about him differently? It’s been established time and again that anything other than rank incompetence in Summer League doesn’t indicate much. Steve Kerr will see what Kuminga can do over the first month or two, clocking bench minutes against relatively engaged NBA competition, and go from there. For the number seven overall pick, Vegas is essentially a warm-up for training camp.

No, it’s the fringe players who are interesting. They’re trying to prove their mettle as 11th and 12th men, which is a confounding task, because the ideal 11th man is someone who can step in when your 9th guy is hurt and do edge-of-the-rotation things: space the floor, give a strong defensive effort, set screens, grab a few rebounds. Contribute, but also stay out of the way. The no-namers typically try to accomplish this by approximating 2006 Kobe Bryant, or at least Lou Williams laboring to secure a Sixth Man of the Year. They get something approaching an open shot and it’s going up. Coaches struggle to lend Summer League play some structure—Horns! back cuts!—but it’s hard to ask someone playing for their stateside career to fit into the flow of the offense and do the little things that probably aren’t going to land them a roster spot. You can only get away with doing Nick Collison Stuff when you’re literally Nick Collison, when ownership loves you and your contract runs another three years.

So here come the Guys: Kenneth Faried and Gary Payton II and Brandon Knight. Here come an assortment of second-rounders, flameouts at Duke and standouts at midwestern colleges best known for football or their journalism program; and temporarily unstashed Europeans pretty sure they’re going back to Turkey after this is over; and wow, Michael Beasley, who is hopefully doing okay. At the horizon of hope, they’re striving to make a point or leave an impression. Jalen Suggs is going to be fine. Even if he’s a bust, he won’t be treated as such until a few years from now. Gary Payton’s kid’s NBA clock is about two minutes from midnight.

Can we talk about the bleach-blonde Latvian who became a meme on Monday night? His name is Jānis Timma, and that means as much to me as it does to you, but his journey to this point—which, again, I just researched last night; I’d never seen this man before in my life—is fantastic.

He was drafted in 2013 by the Grizzlies with the very last pick of the night. At the time, he was playing in his homeland for BK Ventspils, who finished second in the Latvian Basketball League and were champions of the Baltic League, a kind of rinky-dink EuroLeague-like competition involving, well, Baltic basketball clubs but also, because there are only three Baltic states, clubs from Sweden, Russia, Switzerland, and Kazakhstan. (The Baltic League shuttered in 2018.) Timma won the LBL with Ventspils the following year before moving to VEF Riga, then Zenit Saint Petersburg, Baskonia—which curiously doesn’t seem to have anything to do with the small Athletic Bilbao affiliate of the same name—Olympiacos, and finally Khimki Moscow, where last year he put up seven points per game on 35.6 percent shooting with 2.6 rebounds and 2.1 assists over 26 games. He played alongside Alexey Shved, Greg Monroe, Dāvis Bertāns’s older brother Dairis, and Devin Booker (no relation). Just to messily cram this into the dossier: he was also once traded for Luke Ridnour.

When we talk about experience, we usually mean losing in the second round of the playoffs a couple times. Jānis Timma has experience. You haven’t lived until you’ve played ball in the Basque country, where all the towns have five Xs and three Gs in their names and the two biggest sports are soccer and hiking. I can’t imagine what this is like for a 6-foot-8 Latvian drenched in tattoos, but I really enjoy making the effort.

At any rate, Timma was quite good on Monday night as the Warriors fell to his Orlando Magic in overtime. He posted 11 points, six boards, and two blocks, flashed some serious range. I can’t tell you what that means, though I would bet, given that Timma is 29 years old and coming off a not-great year in Russia, that his odds of making the grade are exceedingly long. He’s in Vegas to showcase himself, and he’s in Vegas to be remarked upon and gawked at. He’s a star for one night in the dead of August. Dave Letterman once cracked about Carson Daly’s late night program: “having a show at 1:30 [a.m.] is almost exactly like not having a show.” At about two in the morning, Timma landed a few one-liners.

This is as meaningful as it gets, this time of year. A singular rando cast by forces beyond his control and choices we can only guess at, wearing number 62, arriving to drain a few shots over borderline competition before probably disappearing forever. If Summer League has a utility, it’s that, a taste of the extreme strangeness the NBA regular season doesn’t quite brook. Jānis Timma is too perfect and most likely not nearly talented enough for this world. But he’ll do in a pinch. In fact, he’ll positively delight us.