J.R. Smith Is Developing Interests Beyond The Hardwood, As We All Should 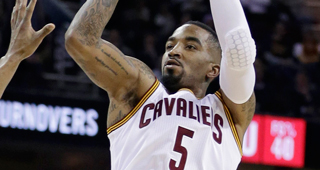 The NBA, thank god, still has a quiet season. When basketball media folks glow about how it’s a year-round league, they’re really talking about how happy they are not to be irrelevant as soon as the Finals conclude, that there’s great attention paid to offseason developments, that their podcasts get downloads, their TV shows get viewers, and what they write gets read. This has nothing to do with whether the sport itself is thriving; it’s about revenue potential. The NBA is a more fully exploited product than it was 10 or 15 years ago. The talking heads without and the marketing folks within—occasionally barely distinct from one another—have figured out how to attract ears and eyeballs even when nothing is happening. Free agency and the draft are extensively previewed and accompanied by plenty of sources say-style reporting about where a player might go or who a team might pick. Athlete social media accounts are mined for the most minute thing that can be spun into A Thing. It’s all noise, not remotely productive or substantial, and it matters only in the sense that the size of the crowd it draws determines how much money can be extracted from insurance companies and betting apps that want to run ads on the side of articles and in the spaces between segments. The NBA, as a commercial venture, has never been better. This is good news for people who work in the league office and at ESPN. Absolutely no one else should care.

What a relief: the biggest basketball story this week has been about a retiree hitting the links. On Monday, J.R. Smith was declared eligible to join North Carolina A&T’s golf squad. Apparently Smith has a knack for the game he’s been playing for a little over a decade, which is surprising in aesthetic terms—picture the faces on the leaderboard at Augusta, then picture J.R.—but it’s not strange for a talented long-range shooter like him to pick up golf relatively easily. Going by anecdotes, Steph Curry, Kyle Lowry, and Kyle Korver are all pretty great golfers. This tracks. It’s a sport that requires strong nerves and superior hand-eye coordination. For what it’s worth, J.R.’s new coach, Richard Watkins, says that “the young man in question is definitely a good player.”

Whether J.R. can get under par or not isn’t particularly important. He’s not taking up a scholarship spot on the team, and he’s paying his own way through school. This is an excuse for him to have fun and satisfy his competitive impulses, hang out with some young athletes, maybe tell a few off-color stories they’ll never forget about the 2012 Knicks locker room. He is trying to have fun, which is the entire point of sports that aren’t played at the very highest level.

On a slightly deeper level, he’s bettering himself in retirement. He’s talked this week about how he decided to go to college after speaking with Ray Allen, who’s currently working on his master’s degree. “[Allen] said the challenge for him is to go back and challenge his mind, challenge his courage if he can actually do it and maintain it,” J.R. told The Undefeated. “It was very inspirational.”

J.R.’s a bit of an inspiration himself. He was a typical athletic phenom, in that he didn’t care much about school when he was a teenager, doing just enough to get by in high school and foregoing college to enter the NBA draft at 18. He did what he was incredible at, chased a dream and a paycheck and had a remarkable career. And now he’s coming back to education because he wants to keep growing as a person. He’s 35 years old, has some three, four, five decades left to live. You can do a lot of useless or actively malignant stuff with all the time in the world and tens of millions in the bank. Smith is choosing to raise his daughters in a college town while attending a highly rated liberal studies program at an HBCU. If there is room in this world for earnestness: that’s beautiful.

And it’s a fine story for late August, which shouldn’t contain much NBA news, or much chatter about it. Especially coming off a year-and-a-half jammed with more basketball than even the professionals who play it could handle. We need a break, a cooling off on speculation and manufactured cataclysm heading into training camps, media day, preseason ball, and the proper league tip-off in mid-October. There will soon be plenty to opine on. It’s okay for everything to throttle down for a little while, for a lacuna in the calendar. We are, after all, not myopic corporate machines that need to be fed. We’re people, who presumably have interests beyond the hardwood. If J.R. Smith can develop them, we can too.