Scottie Pippen Is Ornery And All Over The Place 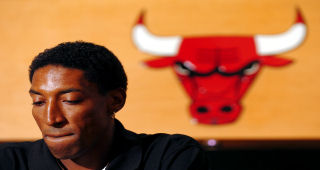 It’s precisely that it’s blithe and fake-interesting that makes it perfect sports chatter: what if that guy played in the social media era? It’s asked about Rodman, Tyson, Wilt, Maradona, whomever. It seems at first like the mind should run wild but instead it stays put, squints like it might see a bus coming. The real answer comes quick; it’s deflating: they would probably be less interesting, in part because our historical lens crops out all the boring stuff—there were many days when Rodman didn’t wear a wedding dress, when Tyson didn’t say he was going to “fade into Bolivian”—and because there is a brand consciousness about the modern athlete, at the agencies behind their public faces, among the marketing teams of professional franchises. This consciousness existed either in nascent forms (Jordan circa 1991) or not at all (Kareem in Milwaukee) in previous epochs. Now it’s taken over the world and computer-rendered it uncanny—not like a Lynchian image, but like a cheap children’s cartoon.

The other thing is we would get sick of a Rodman or Tyson faster, however wild they were permitted to be would start to seem halfway normal, the the thousand micro-stories of their exploits filtering through at a slow round-the-clock drip. I don’t know if TV really desensitized Gen X, but my capacity for surprise and wonder feels like it’s shrunk since I joined Twitter. But I was twenty then. Who knows what forces have acted upon me in the intervening decade-plus, made reacting to certain objectively crazy events feel like a chore.

What’s happening with Scottie Pippen could be happening now or when he played or a decade before that, it doesn’t really matter. Old great athletes sometimes get bitter, they go broke and do things for money, they say stuff just to say it, and then walk it back or act offended when you bring it up to them later. Scottie’s always been a moody sort—he was criminally underpaid for most of his prime, sat out when Phil Jackson drew up a crunchtime play for Toni Kukoc, you’re familiar with the anecdotes—and his post-playing years have been, if not exactly tragic, then strange and uneven. Bad real estate deals, shady advisers, whatever was going on between his ex-wife and Malik Beasley. That time he sued a bunch of news outlets a million dollars each for claiming he was bankrupt. You can’t point to any one incident, but there is something of a rundown gentleman’s club about Scottie Pippen. The smell of a good time gone rancid in the carpets, split leatherette booths.

He put a book out recently. He doesn’t need money, but he put a book out, and in it—in its prologue—he complains that Michael Jordan made $10 million from producing The Last Dance while Pippen earned nothing. (Scottie’s assertion is broadly correct, but nobody except Jordan and a handful of ESPN execs know how much MJ made off The Last Dance.) Then the New York Times interviewed him about the book and he was, in what I imagine was a prismatically uncomfortable eight minutes for Sopan Deb, evasive and short and argumentative about questions that directly referred to things he had said or (had ghost)written. An exchange as summary:

Deb: Just to clarify, because I just want to make sure I don’t put words in your mouth. You don’t think that Phil was racist in designating Toni Kukoc to take that last shot?

Scottie: Did I say it? What are you asking?

Deb: OK, in your book, and I’m quoting you here—

Deb: Well, yeah, I watched the [Dan Patrick Show] interview [where you called Phil a racist].

Scottie: OK, so I said it. Now what are you asking me?

He did a similar thing last summer, when he popped off against Jackson in the Dan Patrick interview Deb’s talking about above, and when he participated in a pungently grudge-flavored whiskey advertorial/Q&A with GQ. (He bagged on Kevin Durant a lot in that back and forth, for reasons surely only Scottie can divine.) The guy radiates grievance, the totally justified impression that he was poorly compensated and underappreciated for his contributions to six title-winning Bulls teams has fermented over time into a more general unpleasantness. Scottie Pippen is annoyed—what about changes depending on when you’re asking and what you’re asking about. It’s Michael, it’s Jerry Krause, truly, but he could be talked into bad-mouthing whatever. What’d you make of The French Dispatch, Scottie? Pompous, overrated. You would never catch David Fincher doing the kind of things that Anderson puts in his films, and that’s because Fincher respects the game.

If wild athletes are different now—read: more constrained, mediated, existing within a fog of air quotes—what translates cleanly across time is a figure like Scottie, who is ornery and all over the place. Think Dame Lillard’s press pal-amplified grumbling, Ben Simmons more or less opting out of his job, Rudy Gobert’s regular and importunate demands for respect. Professional athletes are typically deeply overcompetitive people, and while that drive manifests itself beautifully on the court, because they work tremendously hard, it also means they spend an inordinate amount of time complaining, to the point that they eventually veer into incoherence. What they mean, finally, is that they’re upset. They don’t get enough credit, enough money, enough help. They don’t get enough; they are appetites with big houses, bodies like cybernetic marvels.

At Dame or Gobert’s age, it comes off as silly and uncharismatic. At Scottie Pippen’s age, it’s simply sad. He didn’t get exactly what he wanted a long time ago, and has let those minor slights govern the entire back half of his life. He wears his disappointments about as heavily as any retired athlete I’ve ever seen. Much more heavily, in fact, than those six championships he won. How good those must have felt, at the time and then apparently never again.