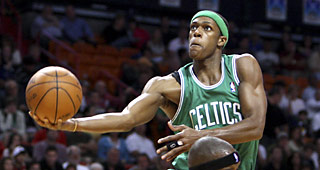 It is safe to say that the NBA’s defining “riddle, wrapped in a mystery, inside an enigma,” to draw from Winston Churchill, is Rajon Rondo of the Boston Celtics. There is a paradox surrounding Rondo. How can a player of such colossal talent have such an extraordinary and fixable flaw?

• He arguably is the best and most important player on the team with the second best record in the NBA, despite a plethora of injuries to key starters and rotation players.

• In his fifth NBA season, on the verge of turning 25, he is entering his prime.

• His playmaking, ballhandling and court vision may be unmatched in the game today, and already rank in the first tier of passers in NBA history. To watch him direct the Celtics offense is frequently breathtaking, and truly beautiful.

• He is a first-team All-NBA Defender who has the ability to disrupt an opposing team’s offense. That is historically rare among guards.

• His coach Doc Rivers, and his teammates, routinely call him the smartest player they have ever been around, with a basketball IQ of Einstein proportions.

• Like a surprising number of great NBA players, he is competitive to the point of almost being a sociopath, and obsessed with improving his game and establishing himself as the best point guard, if not player, in the league

• He is a world-class athlete with speed, quickness and extraordinarily long arms and massive hands.

In short, all signs point to Rajon Rondo being a first-team All-NBA guard, a perennial contender for league MVP, and a player destined for at least the second tier of Celtics greats, players like Havlicek, Cousy, Cowens and Garnett. With a few more flags in the rafters, it is not inconceivable that he could even be mentioned in the same breath as the team’s patron saints: Russell and Bird. That is how much talent he has.

And now, the less than positive: Rondo’s game has a severe flaw, and unless it is addressed it will be a fatal flaw, both for Rondo’s career, and for the Celtics’ chances to win the NBA title in 2011 and the visible future. It is the difference between Rondo being a top-three or top-five player in the league, or being a top-15 or top-20 player in the league. When it comes to winning championships, that is all the difference in the world.

It is not what you think. Rondo’s outside shooting is not his fatal flaw. It has improved and it will likely get better over the next few years. Rondo can become a top-5 player in the NBA without ever being the same caliber outside shooter as Steve Nash or Chauncey Billups or Deron Williams.

No, instead, the deep flaw in Rondo’s game is his unwillingness to draw fouls and get to the free throw line. Note, the use of the term “unwillingness,” rather than “inability.” Perhaps because Rondo is a poor free throw shooter, he avoids putting himself at the line. In combination, it has become a gigantic and growing cancer in his otherwise astounding game.

How pathetic is Rondo’s free throw shooting in 2010-11? Beyond belief pathetic. He has made only 33 free throws in 37 games. But that barely begins to capture the enormity of his lameness. In the entire history of the NBA, going back to the 46-47 season, for every single NBA player who averaged at least 35 minutes-per-game—in effect, for most every NBA starting player—there is only one player in NBA history has made fewer free throws on a per-minute basis. Only one player in one season in 65 years.

Who was that player?

Dennis Rodman in 93-94 with the San Antonio Spurs. All the other players who come close to Rondo and Rodman for free throw ineptitude are defensive specialists who rarely shot or handled the ball and had little chance to draw fouls. Or aging players who have lost their taste to draw contact or their ability to do so successfully. Not a serious point guard or all-star in the mix, except for Jason Kidd who has seen his trips to the line plummet as he has gotten into his mid-30s. But Kidd with a walker looks like Dwyane Wade compared to Rondo when it comes to getting to the line.

Such a decline is unprecedented for an All-Star caliber player in NBA history. As a rule, good players get to the line more frequently, and shoot at a higher percentage as their careers progress into their mid-20s. Great players learn to draw contact like heat-seeking missiles as they enter the lane, and still get their shots off. Rondo generally enters the lane only when he can get to the rim untouched, and he will throw up a weak shot before drawing a foul.

Getting to the line is an especially important skill set for a point guard. A point guard uses the ability to drive and draw fouls as a way to keep defenses honest and create many more passing opportunities; it also gets opposing big men into foul trouble and gets your team into the penalty earlier. And when the offense is not clicking, it is always a nice last resort for a point guard to make something happen. A point guard who does not get to the line is like a right-handed boxer who refuses to punch or jab with his left-hand under any circumstances, or an NFL offense that refuses to ever run the ball and passes on every single down.

When one thinks of Rondo’s most majestic play, it is hard not to recall the 2009 Playoff series against the Bulls and the first four games of the Orlando series, or the 2010 Playoffs against Miami, Cleveland and Orlando. On several occasions he not only looked like the best player on the floor, but the best player in the league, simply dominating play in a jaw-dropping manner.

What is striking is that when Rondo has rocked the foundations of the NBA, and hung out the shingle “Superstar Resides Here,” his free throw shooting has skyrocketed and approached the levels of other elite guards. In the first 11 games of the 2009 Playoffs, Rondo averaged just under six free throw attempts and four free throws per game. In the last three games of the Orlando series, when the Magic came back from a 3-2 deficit to defeat the Cs, Rondo went all of 3-5 from the free throw line…in three games.

Then in the first three series of the 2010 Playoffs, against Miami and then against the teams with the two best records in the league, Rondo averaged just under four free throws per game, and nearly six free throw attempts per game. In the final four games of the 2010 finals against the Lakers, Rondo went for 1-for-6…total for four games. He went 5-for-19 from the line for the entire series.

It is hard to escape the connection. When Rondo is aggressive and gets to the line the rest of his game falls into place. The more free throws he shoots, the better he shoots them. What is especially maddening is that Rondo has the ability not just to get to line more often, but the ability to get to the line almost at will. This is an area where he should be among the league leaders, not duking it out with Dennis Rodman and Bruce Bowen for the ignominy of being the most pathetic free throw shooter of all-time.

Doc Rivers certainly gets it. He was elated when Rondo managed to get to the line three times in the recent February 1st victory over the Sacramento Kings.

“That was big for us,” Rivers said.

Rivers also understands how central Rondo’s getting to the line is to the team’s success.

“We’re staying on him. I’m trying to get him to get to the free throw line as much as possible. Just keep driving, keep attacking. My challenge is 10 (free throws) a game. I think in the second half of the year that’s really important for him — just see how many times he can get to the free throw line, because I think it would be great for his confidence. It’ll be great for our team’s confidence, and we know when the playoffs start that’s going to be something that he’ll have to do. That’s a high number, but it’d be nice. We’re trying to change his mindset.”

There it is. It is his mindset. It is something Rondo controls. Like Dorothy in The Wizard of Oz, he simply needs to click his heels three times.

Doc gets it. If Rondo commits to getting to the line, he becomes a serious contender for league MVP and the chances are immeasurably better that the Celtics are hanging banner 18 in June. Why Rondo, with all his intangibles, does not act accordingly is a paradox.

• Click here to read a companion piece on the advantages of using a Hack-a-Rondo strategy against Rondo and the Celtics.