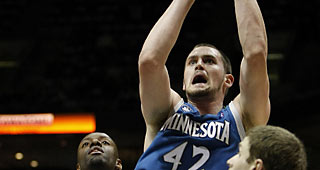 Most of the time, one of the challenges in both creating hypothetical trades and making trades is an economic theory called the double coincidence of wants. In order for a swap to work properly, both parties must have something that the other side wants more than what they are asking for. This challenge is part of what led to money in the first place, as it has an agreed-upon value and is used as the medium for exchange.

Unfortunately, this challenge still exists with commodities like NBA players, though different teams have different priorities which can help make moves easier. Dynamics like contract length, where a player is in the scope of his career, and the other players on roster can help slide the balances enough to make a deal possible, as can adding in other teams as buffers (like we have seen in many different Carmelo Anthony discussions).

One other way to make a deal happen proves even more rare: the “Godfather Offer” as coined for basketball purposes by Bill Simmons. In certain circumstances, a team can amass so many assets that a team simply has to consider an offer. There have been various examples of these kinds of moves in sports, including the Herschel Walker and Ricky Williams trades in the NFL. The rumored Portland offer for Chris Paul around draft time would have qualified as well. These happen rarely in today’s NBA because only having 15 roster spots makes it difficult to amass enough tradable assets to make a deal like this as well as the fact that a Godfather Offer nearly has to be both quantity and quality for quality because that is the nature of an offer like that in the first place.

With all that said, we are entering a time period when a team can and should wield their assets in an aggressive way that fits their vision. The Oklahoma City Thunder have two clear-cut, young All-Stars in Kevin Durant and Russell Westbrook that they can use to build the franchise in both the short and long-term. Surrounding those two, Sam Presti and company have added an armada of young talent at nearly every position on the floor. The problem with that is that over the course of time, Oklahoma City will have to either pay these guys who are underpaid on their rookie scale contracts or simply watch them go. Fortunately for them, management has the pieces to coalesce into a bigger talent while still keeping that core intact. Making a trade for a higher end talent without giving up either Westbrook or Durant may seem daunting at first, yet it is important to remember everything else that the Thunder have to offer.

The first tier of assets does not need a ton of selling.

Jeff Green has held a pivotal role on this team and fits in well with the main guys but is a Restricted Free Agent this year and will likely garner more money than Oklahoma City should be willing to pay him in a league with a soft cap.

James Harden has not fully lived up to the promise of his collegiate career, though he still has two and a half more years (plus the RFA status) that makes him valuable in addition to the room to grow his game.

Finally, Oklahoma City has the Clippers’ 2012 pick with only top-10 protection on it stemming from the Eric Bledsoe trade last year. While the Blakers could absolutely be a playoff team next season, their pick has value in what will likely be a stacked draft if college kids are scared off by the labor uncertainty surrounding the 2011 Draft. While each of these pieces hold value to each and every NBA team, Oklahoma City could shed any or all of them without crippling the team in any way.

Beyond those components, the Thunder have a flotilla of filler (and more than filler) that can be used to get a deal done.

Cole Aldrich was a lottery pick this past year and should eventually become a rotation-level Center at the absolute worst. Guys like that have a real value in the league, especially on a rookie deal.

Eric Maynor has provided depth as the backup point guard behind Westbrook and has been missed in Utah (particularly when Deron Williams is out).

Beyond players, OKC also has some of their own draft picks, a small amount of cap flexibility, and around $12m in expiring contracts in the form of Nenad Kristic and Morris Peterson in case a team wants to move some money around to help a deal get done. Even with all of those potential pieces on the table, OKC can build an offer for high-level talent without giving up Durant, Westbrook, the underrated Serge Ibaka, and/or Thabo Sefolosha. That’s awfully impressive.

Keeping all of that in mind, the question then becomes what players make the most sense with the core discussed above. With PG, SF, and one of the big man spots filled, the choices are somewhat narrowed. However, two players stand out as potential fits: Blake Griffin makes a ton of sense from a personal perspective as he grew up just 12 miles away from Oklahoma City, but it looks like the soonest he would be able to get to OKC is 2013 since the Clippers would have a fan revolution and possibly even a boycott if they traded him any time soon.

The other player should be substantially more gettable. Kevin Love’s year has been under-appreciated by many both inside and outside the media thus far. The guy is averaging Moses Malone numbers though his team is languishing at the bottom of the Western Conference. As is the case with Blake, the Timberwolves have the benefit of a little while longer on his rookie deal and a restricted year at the end of it, meaning that Love would have to sign a one year qualifying offer in 2012-2013 and then be unrestricted in 2013 in order to leave without being traded.

That said, Oklahoma City can make Minnesota an offer they can’t refuse. Part of what differentiates Love and Griffin in terms of trade possibilities is the blossoming of Michael Beasley and the rocky relationship between Love and coach Kurt Rambis. I’m not saying the Wolves are or should be looking to trade Love- the sole issue at point is that they would not hang up the phone immediately if Sam Presti came calling.

Furthermore, the collection of assets in each of the tiers fit incredibly well with the pieces Minnesota intends to build around. Jeff Green would fit beautifully next to Beasley and would allow him to defend the offensively inferior of the two forwards instead of the vortex of defensive futility that is Love/Beasley while also making sense offensively with the Wolves’ talent. Furthermore, James Harden would work well with the other perimeter players and could develop into a jack of all trades SG to accentuate the strengths and mask the faults of guys like Wes Johnson, Jonny Flynn, and potentially Ricky Rubio. Even guys like Cole Aldrich, DJ White, and BJ Mullens would provide value to a team that needs depth of quality and rotation players in the worst way.

On the other side of the equation, Kevin Love would give the Thunder a top power forward that would be unmatched for their age group. Furthermore, Durant, Love, Westbrook, and Ibaka have different strengths and weaknesses that allow them to be more dynamic than other young cores. While Love is flawed defensively, Ibaka’s versatility and athleticism would give Scottie Brooks the creative freedom to have Love guard the lesser post player, which would work well since very few teams possess an offensive juggernaut at both PF and C. On the perimeter, the remaining pieces of Thabo, Maynor, Harden, and Green can gobble up most of the minutes not taken by Westbook and the Durantula with the team also having the ability to use their remaining picks and cap space on boom/bust guys who could take the team another level higher.

It proves hard to calibrate exactly how many assets it would take to get David Kahn to let go of the best player on his team. However, it seems impossible that he would turn down an offer with two out of the three first tier assets (Harden, Green, and/or LAC’s 1st) and two of the rest (OKC’s 2011 #1 and Cole Aldrich, for example). A trade like that would give Minnesota the depth to have cheap and talented team while still retaining their financial flexibility and actually increase their draft pick stockpile.

Oklahoma City has the chance to set themselves up to dominate the Western Conference for the next decade- let’s see if they can make it happen in the next month.