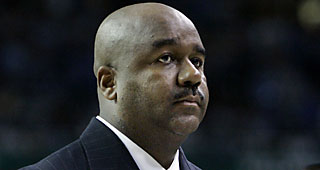 When I was in high school I slipped on some ice and broke my wrist.  I remember the pain, but the pain was not that excruciating. What I remember more than anything was how much my body went into shock. My blood pulsed harder and everything stood still as my body tried to figure out what was wrong. If I kept still I was fine. But if my wrist moved at all, I was paralyzed. For at least an hour, I kept thinking it would go away. But eventually it sunk in. My wrist was broken.

Watching Chris Wright on the basketball court on Wednesday, it was all too obvious what had happened. With 16 minutes left in the second half, and Georgetown trailing 35-28, Chris Wright lost control of the ball. As he tried to gather himself, he ended up under-cutting Cashmere Wright.  Cashmere landed on top of Chris and rolled off him.

Chris sat still on the floor as the media timeout was whistled. He was so still, so slow to respond, it was clear something was wrong. Then Chris grimaced in anger. My first reaction was that he was mad at himself for committing a turnover. But then as he clenched his hand, it was obvious something else was wrong. He took a very long time to get up.

On the sideline, the trainer put a soft wrap on Chris Wright’s hand and he re-entered the game. But immediately it became obvious that he could not move on the court without being paralyzed with pain. I completely understand Chris’s confusion trying to go back on the court. If his hand was still, he could tolerate it. But you cannot keep your hand still when playing basketball. And if your body goes into shock, it does not matter how tough you are, you cannot play.

Chris went to the locker-room with the trainer and came back out just before the under twelve minute time out. Chris now had a wrap on his entire arm and a larger wrap on his hand. But after one defensive possession and part of an offensive possession Chris was bent over in agony again. This time John Thompson came out on the court. He gave the refs a signal. He would not be letting Chris Wright get back on the court.

In a moment, everything is put in perspective.

We can speculate how Georgetown will perform if Chris Wright cannot play.  First, we are going to get to learn a lot about backup point guard Markel Starks. Announcers have been raving about Starks all year, but his efficiency numbers have been quite frankly terrible. His ORtg entering Wednesday’s game was just 70.4 on the season. And while he seemed to be playing with a lot of emotion after Wright went down, he still could execute. Starks was 0-3 from the field with no assists and one turnover. The team may respond by playing Vee Sanford more, but John Thompson only seems to play Sanford at the end of halves, perhaps trying to protect him defensively by playing him against a tired opponent.  Or perhaps Hollis Thompson will slide over and play a traditional wing spot alongside two other Georgetown bigs. Regardless, the DC3 has now become the DC2.

But all the analysis, all the talk of seeding, suddenly becomes less important when you see an injury like this occur. It reminds us that however long the season may seem in November, the college experience is fleeting. Injuries are depressing for any player. But when a senior sees his time on the court cut short, it seems all the more painful.

A lot of people are going to look at the boxscore, hear that Chris Wright was injured, and conclude that Wright’s injury was the reason Georgetown lost the game. But nothing could be further from the truth.

Looking at the Pomeroy data heading into the game, the fact that stood out to me was how much Cincinnati has improved in its ability to force turnovers and steals this season. The Bearcats actually have seven players who are fairly effective at forcing steals this year, while last year they had only two. And given Georgetown’s problems with turnovers this year, I wondered whether Cincinnati would be able to take advantage of this weakness.

On cue, Cincinnati took the first big lead of the game on a series of steals by Cashmere Wright and Dion Dixon.  First Austin Freeman fell victim to some pressure near half-court.  Then Jason Clark entered the game and was caught looking the other way as Cincinnati reached in for the ball.  Then after an offensive rebound, Hollis Thompson had the ball swatted away from behind.  And all of this happened before Wright was injured.  In fact, Cincinnati had 7 of its 9 steals before the injury.

The other storyline heading into the game was Mick Cronin’s motivational tactics with junior forward Yancy Gates. Gates has been dominant since his freshman year, but he has been inconsistent, and Cronin once again chose to use Gates coming off the bench in this game. Gates responded with a dominant performance scoring 17 points and grabbing 11 rebounds. And his energy at the start of the second half broke the game open for good. Gates hit a tough jumper and then let his offensive surge fuel his defense, blocking two Julian Vaughn shots in a row.

The other storyline that deserves a ton of credit is how effective Cincinnati’s defense was at forcing misses. Georgetown entered the day with the second highest FG% offense in the country at 49.7%. (They also had the third highest eFG% offense.) But Cincinnati completely denied Georgetown the lay-ups they normally earn. The Hoyas shot just 25% from the floor in the game. Holding a team that had shot 50% or better 13 times this year to 25% shooting at home was a remarkable defensive performance.

It was a sad day for Georgetown, but that should not overshadow what Cincinnati accomplished. At 9-6 in the Big East, the Bearcats are looking more and more like a legitimate NCAA tournament team.