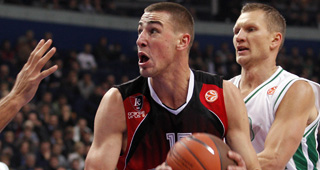 Kevin Seraphin, a rookie with the Wizards, was the only European player selected in the first round in the 2010 NBA Draft.

However, while Seraphin spends symbolic minutes on the court and is waiting for his chance, four big men from Europe -- Enes Kanter, Jonas Valanciunas, Donatas Motiejunas and Jan Vesely -- will likely hear their name in the first round of 2011 NBA Draft and those European talents will try to shake things up in the league.

While Kanter can’t play for UK and is preparing for the NBA without actual game action, here is a quick look at how other three Europeans have been playing this season.

One of the most promising young European talents, Valanciunas already has a significant role in his Euroelague debut season in Lietuvos Rytas. Valanciunas, who will turn 19 on May, has appeared in 14 Euroleague games, eight starts and being at young age, surprisingly proved himself as one of the most productive big men in the league.

Numbers speak for them selves: the Lithuanian center averages 7.7 points and 5.8 rebounds in only 15 minutes. That means Valanciunas scores 0.51 points (12th result in the league) and grabs 0.36 rebound (second result) per minute. Despite Valanciunas’ productiveness and consistency, head coach Aleksandr Trifunovic has limited center’s minutes as Valanciunas played 20 minutes or more only twice during this Euroleague season. The main reason of that is Valanciunas still lack of muscles and needs to improve his arsenal of offensive moves.

What is more important, Valanciunas shoots an incredible 70 percent from short distance and 92 percent from the free throw line in Euroleague. It seems that Valanciunas has everything what it takes to be a great NBA center - talent, body, experience and relentless work ethic.

Donatas Motiejunas, another big man from Lithuania, earned his coach’s trust and received more playing time in Eurocup this season. The 20-year-old forward’s minutes went up from 20 to 29, and so did his scoring and rebounding numbers. However, his inconsistent free throw shooting should make NBA teams worry as Motiejunas made only 31 of his 53 shots in Eurocup this year.

It’s easy to see that Motiejunas body is maturing and its getting ready for the NBA. Nevertheless, his inconsistency, defending and rebounding skills are questionable and that is why Motiejunas will probably miss the Top-5, but it’s difficult to believe that this kind of versatile talent won't be drafted in Top 10 or at least Top 15.

It seems that Jan Vesely is the most mentally ready for the NBA European player of all prospects. It was the third Euroelague season for Vesely and he feels that it’s time to make it to the NBA - the Czech talent has officially declared that he’s entering this year’s draft.

A lot of people say Vesely probably made a mistake by skipping last year’s draft as he believed that working with coach Dusko Vujosevic would help him progress faster. However, Vujosevic left the team and the 20-year-old forward had a difficult start to the season but lately started “to do his thing”. Vesely scored only 16 points, made 6-of-15 from the field in first three Euroleague games.

Of course, we cannot compare this season with last one, where Vesely helped Partizan reach Euroleague Final Four, but there probably was more good than bad this year.

Vesely scored 17 twice against Montepaschi and Caja Laboral during the Euroleague season and finished maybe his last Euroleague season strong - ending up with season-high 23 points and 6 boards against Efes Pilsen. Vesely proved that he’s the same talented and gifted player as he was last season.