On To The Next Season Of College Basketball 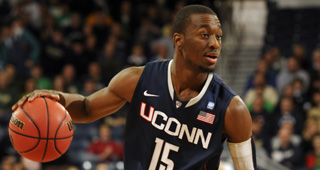 Heading into the tournament, I calculated the expected wins for each conference based on the historical performance of the various seeds. Here are the final numbers, for those of you scoring at home:

Random Thoughts on the Championship Game

Sleeper Teams for Next Year?

Teams that give freshman a lot of minutes tend to improve significantly the next season. The biggest jump is usually from freshman to sophomore year. Here are the top-10 teams that gave the most possessions to freshmen this year:

Kentucky gave over half their possessions to their younger players. That’s usually a strong indicator that the team will play better next year. Of course it only works if those players come back. NC State, Michigan, and Stanford could all be real sleepers.

Today, I will leave you with just the first step in the process, and no formal numbers. I will simply be projecting how the loss of various seniors should hurt teams. In May, after we know the players in the draft, I will update these standings, removing the early entrants and various transfers. Then in the middle of the summer, I will add in the impact of the recruits. I plan to spend a significant amount of time documenting how various coaches use their new recruits, and how likely players are to develop. As I discussed in this North Carolina and Wisconsin article, the impact of recruits is not the same for all coaches. While some coaches will give freshman ample time, other coaches never let freshman get off the bench. Here is only the first step in the process:

No team in the country loses more players than St. John’s. And while Steve Lavin worked wonders this year, he is going to need some time to bring St. John’s back around. Don’t forget that three of Notre Dame’s seniors still have eligibility left. Connecticut and Louisville lose almost no players to graduation. But will players leave early for the draft and cause their ranking to fall? Stop back in May for the latest projections.

Ohio St. still has a slew of talent, and Michigan is surging towards the top of the Big Ten. Penn St. and Illinois lose a ton of rotation players and will need to see some significant player development to play well next year.  Welcome to the Big Ten, Nebraska, I expect a lower division finish. Indiana finally gets out of the cellar, and these projections do not include the impact of recruit Cody Zeller yet.

Arizona and UCLA were very young, so both were expected to stay near the top of the league. But already several UCLA players have declared for the draft. I will update these standings in May once we know which of the UCLA players are returning. (At least one has signed with an agent and that is not reflected here.) Washington St. also brings back most of its rotation, but given all the recent marijuana citations, I would not be surprised to see some sort of shake-up in the off-season. Colorado and Utah join the Pac-12 and the expectations are that neither will dominate right away.

Isn’t everyone looking forward to Texas and Kansas finally playing twice a year? Billy Gillispie is going to have a long-road back as Texas Tech loses a bunch of seniors from a team that was not very good. Missouri had a young team this year and was expected to compete for the top of the league next year. But I may have to lower Missouri’s expectation once I document Frank Haith’s impact on player development.

There were a ton of seniors in the Boston College rotation this year. They could be in for a hard fall unless the new players play well right away. Frank Haith stepped away from a nice young Miami team. Miami might be good next year, but only if the new coach is a good fit. We’ll see how that projection changes during the off-season.

There were no seniors in the Vanderbilt rotation this year, but will everyone come back?  Florida still returns a ton of talent, and picking them third here is basically saying that the SEC should be back next season.