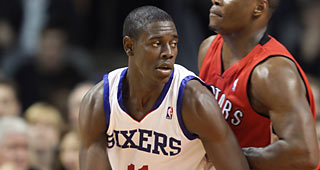 Point guard has become the NBA’s new glamour position. The top point guards in the high school classes of 2007 (Derrick Rose), 2009 (John Wall) and 2010 (Kyrie Irving) each went #1 overall after one year of college. Jrue Holiday, the top point in 2008, has had a bumpier ride to the NBA than his peers, but his recruiting ranking was no mistake. He has the talent to become a perennial All-Star.

Holiday didn’t have the opportunity to dominate the ball in his one season at UCLA. The Bruins already had a senior point guard in Darren Collison, a two-year starter who had played in three Final Fours.

For the first time in his life, Holiday was playing off the ball, which requires an entirely different skill-set. Off-ball guards are primarily spot-up shooters, the guys receiving passes instead of the ones making them. Combine that transition with playing for Ben Howland, whose system is known to depress the statistics of NBA prospects, and Holiday had a fairly underwhelming freshmen season.

So when he entered the 2009 draft, he was rated in the middle of a huge group of point guards. Twelve were taken in the first round -- Tyreke Evans, Ricky Rubio, Jonny Flynn, Stephen Curry, Brandon Jennings, Holiday, Ty Lawson, Jeff Teague, Eric Maynor, Collison, Rodrigue Beaubois and Toney Douglas. If there were a re-draft today, Holiday, the No. 17 pick in 2009, would go before all of them.

At 6’4 200 with a 6’7 wingspan, he has exceptional size for a point guard without sacrificing much athleticism. He’s one of the few true points who can defend both guard positions, and his defensive versatility allows the 76ers to let the 6’1 175 Lou Williams score without having to run the offense.

Despite turning 21 only two months ago, Holiday is the rare young point guard without a serious hole in his game. He has the size to defend his position and rebound; he can shoot from the perimeter (a 37.5% career three point-shooter), create his own shot off the dribble (taking 27% of his shots in the paint last season) and run a team (averaging 6.5 assists per 2.7 turnovers last season).

His scoring average, at only 14 a game, isn’t as high as some of the other 2009 draftees, but that’s more a function of his role with Philadelphia. A mid-first round pick on a team with established veterans, Holiday (with a usage rating of 20.8 last year) hasn’t had nearly the same offensive freedom as Evans (25.3 usage rating), Curry (24.4) or Jennings (25.5).

Indeed, before his break-out season last year, it’s possible his own team didn’t quite realize the talent they had on their hands. In a move that could haunt them for years, the 76ers, took Evan Turner at #2 in the 2010 draft over Greg Monroe, DeMarcus Cousins and Derrick Favors.

Now Philadelphia has an unbalanced roster with a weak frontline and four different perimeter players -- Holiday, Turner, Williams and Andre Iguodala -- who are most effective with the ball in their hands. It’s the primary reason why Turner had such a disappointing rookie season, with his struggles playing off the ball mirroring Holiday’s at UCLA.

In an effort to free up minutes and shots for Turner, the 76ers were shopping Iguodala aggressively before the lockout. But because of his massive six-year $80 million contract, Philadelphia will be lucky to get back equal value for him, much less a big man who can command a double-team in the post or protect the rim.

Turner isn’t as good an athlete, passer or shooter as Holiday. Long-term, it’s hard to see a scenario where he overtakes Holiday, who is almost two years younger, to become the 76ers primary offensive option. And while they might become an effective duo on the perimeter, without an elite big man, Philadelphia will struggle to break out of the pack in the Eastern Conference.

Not a particularly flashy player on a mediocre team, Holiday hasn’t gotten much national attention in his first two years in the NBA. But he’s already produced at a very high level for a 21-year old, now it’s just a question of good he ends up becoming.