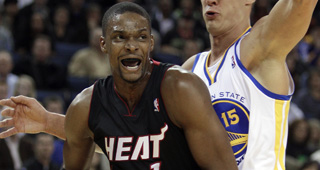 Basketball in America is primarily an urban sport, as most current NBA players grew up in a major metropolitan area. The majority were identified by the time they reach middle school, playing against each other and growing up in the same AAU basketball circles.

As a result, home-town pride is extremely high amongst NBA players, especially among those of the same age cohort. In a summer dominated by the incredibly slow pace of negotiations in the lockout, the most buzzed-about basketball moments have come in exhibition games between players from different cities -- the Goodman (Washington DC) vs. Drew (Los Angeles) League showdown, the one-on-one matchup between Kevin Durant (playing for Goodman) and LeBron James (playing on the Carmelo Anthony-led Team Baltimore squad).

So, in a similar vein to our look at which college would win an alumni tournament of current players, here’s a look at which city produces the best NBA players. The transient childhoods of players like Amar'e Stoudemire (six different high schools) and Kobe Bryant (who grew up in Italy and then played in high school near Philadelphia) makes it hard to divide up teams, so only players who spent the majority of their childhood in a major city were counted.

In terms of the depth and quality of NBA talent produced, the vast Los Angeles metropolitan area stands head and shoulders above the rest of the country. It attracts players from all over the state and turns them into stars: Los Angeles has big men (Chandler, Johnson), wings (Pierce, Ariza) and a host of point guards that turned UCLA into “PG U” over the last decade. It’s the only city that could field a competitive team of guys who didn’t make the cut -- Tayshaun Prince, DeMar DeRozan, Nick Young etc.

It’s rare for one city to produce two NBA All-Stars -- Williams and Bosh -- at the prime of their careers. It’s even rarer for both to have graduated high school in the same year -- 2002. But the strangest part of all is that neither player was the biggest star on his own high-school team. Bosh played in the shadow of Bryan Hopkins on a Lincoln High squad that won the mythical national championship, while Williams was a less heralded recruit than high school teammate Bracey Wright, who starred at Indiana and was a second-round pick of the Minnesota Timberwolves.

** Full disclosure: As a Dallas native, I saw many of these players grow up first-hand. Down-the-road, watch out for LeBryan Nash (Oklahoma State) and Perry Jones III (Baylor) to continue the DFW pipeline. **

The backbone of this squad comes from the famed ‘03 Atlanta Celtics, arguably the best AAU team ever assembled. It featured three NBA-caliber big men -- Howard, Smith and former New York Knick Randolph Morris -- as well as Javaris Crittenton in the back-court. As a high school player, witnessing their size and athleticism in person was a humbling and eye-opening experience.

Perhaps it’s not surprising that Chicago produced a generation of great young guards after Michael Jordan dominated the sporting landscape for well over a decade. In many ways, Chicago is the converse of Atlanta, with great play in the back-court but no legitimate front-court players to speak of. They would be unstoppable in an up-and-down pick-up game, but if the tempo was slowed, they’d be unable to control their own backboards.

A somewhat surprising entry on this list, Seattle has had a thriving hoops scene for most of the last two decades. Its many NBA products have shown a lot of loyalty to their hometown, including staging an exhibition there this summer. It will be interesting to see whether a lack of an NBA team will dry up the city’s pipeline of elite basketball players.

Even if you separate the DC/Northern Virginia products from Baltimore (Carmelo Anthony, Rudy Gay), the nation’s capital has become a growing power in the world of amateur basketball. One of the reasons why legendary Maryland coach Gary Williams retired was because of his inability to make inroads with the region’s AAU culture, as the area’s best players -- Durant (Texas) and Beasley (Kansas State) -- have wound up all over the country in recent years.

The inability of the self-proclaimed “Mecca of Basketball” to produce quality NBA players has puzzled many, even warranting a feature story in the Wall Street Journal. There may be some merit to the idea that the city’s best players are overwhelmed by the hype, with one example being the underwhelming pro career of Sebastian Telfair. But it’s just as likely they aren’t that good to begin with: there aren’t many unathletic 6’0 175 All-Star point guards in the NBA, regardless of where they grew up.

Philadelphia has long had a reputation for producing tough-minded players, and its current crop of NBA products is no exception. Evans and Lowry are two of the most physical guards in the league, while Nelson is one of the few sub-6’0 players to excel in the NBA.