With A Few Signature Wins, Pacers Looking For Attention 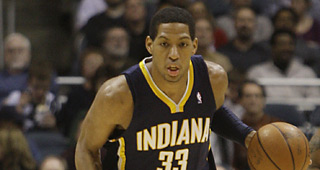 More than a sixth of the way through the season, the Indiana Pacers are gelling quicker than anyone expected. They have nine wins in their first 12 games and followed an early string of cupcake wins with two wins against the Boston Celtics and a very impressed defeat of the Atlanta Hawks on Jan. 11.

They haven’t lost two in a row through the first three-plus weeks of the season and they have two three-game winning streaks; including one they’ll test on a three-game California swing this week. The Pacers had just three streaks of three or more wins over last year’s 82-game season and also suffered through five losing skids of three or more games. Indiana made the playoffs in 2011 as an eighth seed despite two six-game slides.

Danny Granger and Co. want some respect, but do they deserve it?

• A Look At The Schedule

While the Pacers do have three quality wins out of their nine victories, they have a poor Simple Rating (0.95) because of Boston’s 4-8 record and the wins they collected against the likes of the Raptors, Nets, Cavaliers, Pistons and Bobcats.

They have made strides on offense, but their shooting percentage is still downright ugly. They are shooting 41.3% as a team, better than just three other clubs. They were shooting better from downtown than overall at one point, but they are cooling down a bit. They rank just 17th in the league, having made 33% of their threes.

Ball movement has been the key to a successful offense and the Pacers have looked like a group of one-on-one players all too often. They have assisted on 53% of their made field goals. The Lakers, Nuggets, Bulls and Spurs are all over 60% in that regard.

They have scored 101.5 points per 100 possessions, good for 20th in the league. That number should go up if they share the basketball more consistently and coach Frank Vogel’s goal of a quicker pace is reached. Indiana averages 91 possessions per 48 minutes, putting them near the bottom third of the NBA.

This isn’t meant to pile onto the criticism he has garnered, but once Granger’s shots start falling (33.5%), the team numbers will start picking up.

I’ve heard the term “smash mouth” a lot over the last two weeks and only some of the time it has been in reference to the NFL playoffs -- not once has it been about the 1990s ska/pop band.

The Pacers want to win games by stopping teams instead of outscoring them like they unsuccessfully tried to do under Jim O’Brien. In terms of defensive rating, they are fourth-best in the league (96.8), so they are practicing at least some of what they preach.

“Defense is our staple,” Hibbert told RealGM earlier this month. “We are a defensive-minded team and we are going to go out there and shut down people.”

Opponents are shooting 41.5% overall (fifth-best) and 33% from three-point land (14th). They could stand to close out on shooters a little better, but that should come with time and the further development of guys like Paul George.

The name of their home has changed, but little else has. The Pacers are averaging 14,586 fans per home game -- just five teams average a lower number. They are 5-0 at home and have played spirited basketball in all of their home games, but fans still aren’t coming out to see the rebuilt Pacers.

The good news? The Celtics are the only big road draw they have welcomed thus far and they have seen their attendance increase by eight percent from last season. They haven’t averaged more than 15,000 fans since the 2006-07 campaign.

Most people enter the New Year with aspirations of a healthier lifestyle and a balanced diet, but few follow through. The Pacers have.

They have seven players averaging double-figures with Granger (15.3) leading the way and George Hill (10.5) bringing up the rear. Their top seven scorers are separated by just 4.8 points, a remarkable number that highlights their balanced offense.

Philadelphia, another surging, young team in the East, also has seven double-figure scorers, but the gap between their leading scorer, Lou Williams, and their No. 7, Evan Turner, is greater (6.1 points).

The Pacers showcased their depth on Friday night against the Raptors when Granger was ejected early and his teammates battled back from an early deficit for a road victory. Granger is the clear leader in shot attempts with 15.5 per game, but their top seven scorers all attempt at least eight each contest.

Despite their poor shooting as a team -- Hibbert (52.6%) and Hill (47.7%) are excluded – the Pacers have a very efficient rotation. John Hollinger’s PER rates a player with a value of 15.0 as average and Vogel has six players at or above that mark. Granger and George are both above 14.0 for the season.