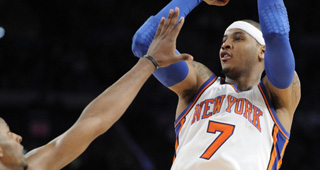 Since Carmelo Anthony was traded to New York, the Knicks are 20-24 in the regular season while the Nuggets are 30-12. To make matters worse, Anthony was outplayed by Danilo Gallinari in Denver’s 119-114 2OT victory over New York at Madison Square Garden on Saturday.

Given both the acrimony surrounding how Carmelo forced himself out of Denver and the shortened attention span of modern culture, it’s no surprise that many are ready to crown the Nuggets as the trade’s clear winner.

However, constructing a championship-caliber roster takes time, and New York is much closer to reaching that goal than Denver. It’s far too soon to judge the trade, especially a quarter-way through a lockout-shortened season where the quality of play league-wide has been sporadic at best.

The Knicks have undergone a complete roster transformation since Christmas 2010, when they were an up-tempo team stocked with athletic shooters (Danilo Gallinari, Wilson Chandler, Raymond Felton) surrounding Amar'e Stoudemire. A year later, the only players left besides Amare are Landry Fields, Toney Douglas and Bill Walker.

New York had to sacrifice most of their depth to bring in a perimeter player capable of being a primary offensive option (Carmelo) and an All-Defensive team 7’0 capable of anchoring a defense (Tyson Chandler).

Denver, on the other hand, doesn’t have either. They’ve been winning games by playing at the league’s fastest pace and relying on their depth at nearly every position.

And while Ty Lawson is one of the NBA’s most underrated players, at only 6’0, it’s hard to envision him as the primary offensive option a championship team. Not only does his lack of stature present problems for Denver on the defensive end, but lengthy, athletic defenders like New York’s 6’6 rookie Iman Shumpert can frustrate him into games like Saturday, where he shot 3-for-12 from the field.

Their two other main scorers, Gallinari and Al Harrington, are both jump-shooting forwards better suited as second options as well, as neither player has the play-making ability to consistently create shots for other players.

The 2004 Detroit Pistons were able to win a championship without a traditional first option, but they had a four-time Defensive Player of the Year (Ben Wallace) and an elite 6’11+ defensive big man (Rasheed Wallace) protecting the paint.

Denver has a solid two-way center (Nene) averaging only a block a game and a giant hole at the power forward position. At some point in the playoffs, they will have either Harrington or Gallinari trying to guard Blake Griffin, Dirk Nowitzki, LaMarcus Aldridge, Pau Gasol or Zach Randolph on the low block.

For the Nuggets to make noise in the playoffs, they’re going to need to turn some of their offensive threats on the perimeter into an elite front-court defender. Of course, those types of players, especially ones who won’t destroy a team’s floor spacing offensively, are among the most coveted in the NBA.

New York, in contrast, will have a much easier time “fitting” players around Carmelo, Amar'e and Chandler.

The team’s biggest holes are at point guard and behind Chandler and Amare, who are being backed up by a combination of Josh Harrellson, Jared Jeffries and a prayer.

Baron Davis, if healthy, could solve the first problem. He’s scheduled to return soon, and while he’s never been the healthiest or most motivated player, a big-market team that desperately needs him is the perfect situation to regain the form he showed leading the Golden State Warriors to a shocking upset of the Dallas Mavericks in 2007. This is the most talented team he’s ever played on, and he would be beloved if he could play at a similar level for New York in the playoffs.

Even more importantly, point guard is the easiest position on the court to fill. If Davis doesn’t work out, Steve Nash, a pending free agent unlikely to stay in Phoenix and looking for one more chance at a ring, looms as a possible savior.

On the interior, the Knicks need a replacement-level big man to soak up the minutes behind Chandler and Amare. And in a post-lockout NBA where teams are increasingly reluctant to give mid-level players big deals, there are a number of ring-chasing veterans who might be available at an extremely low number. Most intriguingly, Boston is indicating they’ll blow the team up and it’s hard to imagine Kevin Garnett, who is entering free agency and has already made $270 million in his career, chasing money.

This is the beauty of having a team full of near-max superstars in the new CBA: with guaranteed money for mid-level free agents declining, they’ll be basing their decision primarily on location and winning. Three years from now, we may see Miami and New York as two of the big winners of the new system.

Small-market owners may end up regretting pushing for a system with a harsh luxury tax and a payroll floor, as the effect will be redistributing money from bench players on good teams (who will be playing for near minimum salaries) to bench players on bad ones (who, on average, will need to be slightly overpaid for the team to reach a payroll floor).

With the rosters they currently have, neither Denver nor New York will win a championship this season. The difference is the Knicks are a few small tweaks from having a team capable of matching up with Chicago and Miami while the Nuggets look headed for a stint as the Atlanta Hawks West, a good regular season team with a second-round ceiling.

I liked the Knicks deal for Anthony last season when many people were worried it would prevent New York from acquiring Chris Paul, and I liked it even more when they were able to sign Chandler in free agency.

And by the start of next season, when the Knicks could have a starting five of Davis, Shumpert, Anthony, Amar'e and Chandler with Douglas, Fields and Garnett off the bench, I’m betting they’re going to have the last laugh.