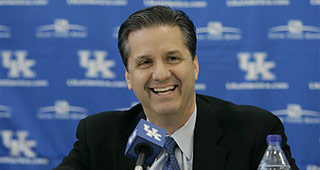 I used to love to mock McDonald’s All-Americans who were busts in college. But over time I realized how much noise there is in the recruiting rankings. Outside the top-10, players are rarely a sure thing. A few years ago Steward Mandel asked a more provocative question about the recruiting rankings. He asked whether Duke was really getting elite players, or whether Blue Devils recruits only earned their ranking because they had a scholarship offer from Mike Krzyzewski.

Last fall, I came up with a new methodology to address this question. Using player data I looked to see which coach’s recruits have performed at the highest level. And then I looked to see which coach’s players developed the most over their careers. I am now launching the second version of those rankings that includes several important improvements.

- I now control for shot volume. Last fall North Carolina’s recruits looked inefficient relative to Notre Dame’s recruits because Roy Williams allows his first year players take a high volume of shots while Mike Brey does not. I use the 1 to 1.25 ratio often cited by NBA folks as the proper tradeoff for shot-volume and efficiency.

- I now group freshmen recruits and transfers into the same recruiting category. When I presented the numbers last fall, Stan Heath looked like he was great at player development because his juniors far out-shined his freshmen. But many of his juniors were transfers, not returning players. Thus I now group transfers in with freshmen recruits. (See Recruiting Rank in the table.)

- Of course, if you group freshmen and transfers, then transfer-dominated teams will fly up the recruiting rankings. So I equalize the value of recruits based on the average development between freshmen and junior year. (Or senior year if appropriate, although transfers disproportionately join teams as juniors.)

- Next, I solve what I like to call the Frank Haith dilemma. A number of people have said you can’t evaluate Frank Haith this season because he inherited Mike Anderson’s players. But when you have 10 years of player data at your fingertips as I do, it is pretty easy. For a typical coach with Missouri’s returning roster, average player efficiency would jump by 3.6. But under Frank Haith, average player efficiency has jumped 8.6 points. That may not prove Frank Haith is the right choice in the long-run, but for this season he has more than doubled the player development of an average coach.

In general, instead of looking at the current rating, I now evaluate the average improvement of returning sophomores, returning juniors, and returning seniors. Instead of the current efficiency, I look at the change in efficiency. For those of you that feel that Bruce Weber only went to the Final Four because he had Bill Self’s players, the rankings now reflect that. To the extent Bruce Weber transformed Luther Head into an efficient senior, he gets credit. But to the extent that Roger Powell was already an efficient post player, Weber does not get credit.

- I examine sophomores, juniors and seniors separately because sophomores tend to develop at a much more rapid rate. Then I calculate the three-year player development total, the sum of the development for returning sophomores, returning juniors, and returning seniors for each coach. (See Development Rank in the table.)

- For the Recruiting Rank, I believe it only makes sense to incorporate the school where the coach is currently employed. Sean Miller gets a different caliber of player at Arizona than he did at Xavier. (See the column Tenure in the table for the number of years at the current school.) But when looking at how Miller develops players, I think we can learn from how he improved players at Xavier too. Thus the Development Rank includes data at all schools that the coach has been at in the last 10 years. (See the column All in the table for the years of player development data.)

- Next, as a hypothetical exercise, I ask what coach would have the most efficient seniors if he recruited freshmen and they stuck around for four years. I take the recruiting rank plus the three-year development rank, and calculate the efficiency of a fourth year player under the coach. (See Overall Rank in the table.) What the table suggests is that if you combined John Calipari’s recruiting with his player development, he would be the top offensive coach in the nation. Of course this is just a hypothetical exercise. John Calipari has not consistently had the top offensive team in the country at Kentucky because of players leaving for the NBA. But for coaches with normal rates of attrition the exercise makes a lot more sense. Andy Kennedy and Leonard Hamilton have been fairly equivalent, but they have succeeded in different ways. Kennedy has built his offense with recruiting while Hamilton has been more effective at developing returning players into stars.

- Finally, very unusual things tend to happen in a coach’s first year with his new team. (Just ask Tom Crean.) Therefore I give 50% less weight to a coach’s first season in a new job. I also only include coaches with at least three years of tenure in the table, and there are 49 of these in the Power 6 conferences.

- Cal doesn’t exactly have UCLA’s prestige, but Mike Montgomery chugs along developing players, just as he did at Stanford.

- And Mark Fox has truly been fantastic at getting the most out of his players. Nevada is better this season, but there was clearly a gigantic drop-off when he left the school.

- Rick Barnes is a better recruiter than Bill Self, but he is not nearly as good at player development. But if Barnes' players weren’t leaving for the NBA at such a ridiculous rate, he would probably look very similar to Bill Self.

Many other coaches have struggled:

- What is scary is that Kevin O’Neill has actually been very good at developing players at USC. But the cupboard has been more than bare. NCAA sanctions and a run of injuries will do that.

- Rick Pitino is shockingly low on this list, and I think injuries are a large reason why he has struggled to develop players at Louisville. His success at Louisville has also mostly been fueled on the defensive end of the court.

- Anthony Grant also has his defense to fall back on, but his inability to develop consistent offensive players at Alabama is starting to be a concern.

- Over his tenure at Illinois, Bruce Weber has not been able to get much out of freshmen whether they have a RSCI Ranking next to their name or not.

- Darrin Horn’s player development looks bad at 42nd, and that is giving him credit for what he did developing players at Western Kentucky. If this only included his time at South Carolina, his ranking would be worse.

- Mick Cronin and Stan Heath want you to evaluate them based on the recent trend, not their full tenure. But most of their success has come from defense not offense.

Three thoughts on coaches not listed:

- Penn St.’s Ed Chambers got a late start on the job, had almost no chance to recruit, and has had very little production out of his first year players. (This is why I give 50% weight to a coach’s first season.)

- Because of the team’s overall record, Cuonzo Martin is not getting enough credit, but he has done wonder’s developing Tennessee’s returning players this season.

Two final thoughts on the table:

-All schools suffer some attrition, so I am probably punishing the good recruiters too much in the overall rank column.

- To the extent that the great coaches can get freshmen to reach their potential sooner, they may look like stronger recruiters in my table. “Recruiting Rank” could very easily be called “Recruiting Rank plus First Year Development.”