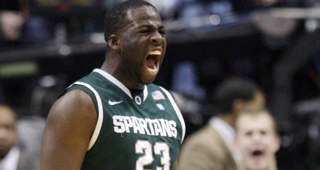 - No one has performed better against NCAA tournament teams than Michigan St. While their winning percentage isn’t the best, when accounting for opponent, venue, and margin-of-victory, the Spartans have been the most dominant.

- While Syracuse has an impressive 12-2 record against tournament teams, the reality is that they haven’t been completely dominant in those games. They’ve escaped with close wins against Georgetown, Connecticut, West Virginia, and others.

- I’m not sure I would trust these numbers for teams with very few games. Sure VCU has great numbers, but they played Western Kentucky twice and crushed them, and they beat South Florida handily while the Bulls were missing multiple starters. Similarly, Murray St.’s impressive stats are driven by one blowout win over St. Mary’s.

- But for teams with numerous games against tournament teams, the stats are more revealing. Duke has played 15 games against NCAA teams and while they’ve gone 10-5, they haven’t exactly been blowing teams out.

- Ken Pomeroy has rightfully argued that Southern Miss is over-seeded. But the reason that happened is because the Golden Eagles have been at their best against quality competition.

- No one has played more games against tournament teams than Louisville. And while the Cardinal haven’t always been dominant, they have been tested.

- Baylor may be a No. 3 seed, but they’ve struggled against NCAA tournament teams.

- Texas has been close in a lot of games, but the 4-11 record indicates that they’ve rarely earned the win against quality competition.

- Memphis has also earned its keep by crushing non-tournament teams. Against the tournament field they have been merely average.

- Amazingly, South Dakota St. did not play a single NCAA tournament team during the regular season.

But how have these teams done in the last 10 games?

- Now Memphis becomes an even bigger dilemma. They’ve been playing like one of the top teams in the country lately, but when they played tournament teams, they weren’t nearly as good. Which team will show up on Friday?

- Belmont is currently clicking on all cylinders which makes them a trendy pick to upset Georgetown.

- And don’t sleep on South Florida. They were a much better team at the end of the season, even if they can’t score to save their life.

- Louisville really is the perfect analogy to last year’s UConn team. They limped to the finish in the regular season before winning the Big East tournament. Overall in the last 10, they haven’t been that great, but over the last 4 games they were special.

- Duke was simply not dominant over the teams last 10 games.

- As much as I love Texas based on all their close losses to quality teams, they sort of limped to the finish. They may have defeated Iowa St. in the Big 12 tournament, but before that they were struggling to beat teams like Texas Tech.

- Murray St. also struggled down the stretch in the OVC. They were winning games, but not by a margin that would suggest a deep NCAA tournament run.