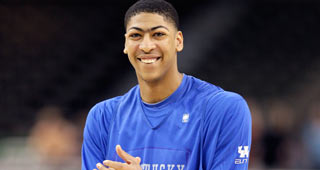 One thing I noted on Twitter shortly after the lottery was how this is the third consecutive season in which the winning team is coming off an offseason where their franchise player was lost.

The Wizards didn’t outright lose Gilbert Arenas following his suspension, but they were quickly moving away from him into a rebuild even before John Wall.

The Cavaliers with Kyrie Irving after LeBron James and now the Hornets and Anthony Davis following the Chris Paul trade goes without explanation and becomes an intriguing piece of symmetry.

While not a lottery win, you can take the analogy even further with the Hornets as they drafted Paul fourth overall just a few months after trading away previous franchise player Baron Davis.

Without doubt, the big winners of the draft are the Hornets, who not only will select Davis but also will have the 10th overall pick thanks to the Paul trade. New Orleans is in an infinitely better position than they were in December, even better than if Chris Paul would have committed to an extension.

It was ‘some very dirty business’, but the Hornets clearly accepted the better trade by going with the Clippers and not the Lakers/Rockets three-way. Not only did they allow themselves to be bad enough to have a great opportunity at winning the lottery, but they also have the 10th overall pick and will likely sign Eric Gordon to an affordable (coming off injury-plagued season) long-term deal for one of the best young shooting guards in the NBA. This should become an excellent core capable of owning the Southwest Division in the eventual post-Duncan/Dirk landscape.

The secondary winners are the Blazers (acquiring Brooklyn’s pick), Warriors (retaining their pick without insurance) and Clippers (would have felt horrible to trade away the first overall pick in two consecutive seasons), while the Bobcats (no guaranteed franchise player), Nets (no pick, no new Dwight Howard trade asset) and Jazz (miss out on a great lottery pick by one slot) are the losers.

It was status quo for the other teams with stakes in this game since there was no mid-lottery team ascension.

Whatever Davis becomes, whether it is a Hall of Famer, occasional All-Star or shotblocking specialist on the very low end, he is the clear best available player. I’m not as bullish on Davis as I was on Greg Oden, Derrick Rose or John Wall on the night of their respective lotteries, but I do like him more than Kyrie Irving, Blake Griffin, Andrea Bargnani and Andrew Bogut.

Irving and Griffin have played above expectations because it was difficult to imagine exactly how they would translate to the NBA. The same situation applies to Davis and that is why most opinions of him contain conditional statements even while offering immense praise.

Salient arguments can be made for the Bobcats to draft any of the four players I have in the top-five beyond Davis.

Bradley Beal for his classic shooting guard game and much needed perimeter shooting.

Michael Kidd-Gilchrist for his culture-changing grit and utility as a lynchpin at the small forward position.

Thomas Robinson for his offensive skill at the power forward position to complement Bismack Biyombo up front.

Robinson is the safest pick of the three and the Bobcats should be bad enough again next season to be in the running for a Shabazz Muhammad or Archie Goodwin on the wing, or to land a true center such as Nerlens Noel or Cody Zeller.

Similar to the Bobcats, the Wizards can go in a number of directions with their pick. Washington unfortunately went small forward heavy in last year’s draft and that instantly makes Kidd-Gilchrist at least slightly less desirable.

Beal has the potential to be a top-3 shooting guard and form the most dynamic backcourt duo in the NBA with Wall. Passing on a shooter of Beal’s caliber for a highly questionable perimeter shooter in Kidd-Gilchrist is what this pick will be decided upon.

Cleveland has a massive hole at small forward and Kidd-Gilchrist represents everything that the franchise is trying to build toward in the post-LeBron era.

Drummond would be another highly talented piece for the Kings, a franchise without a long-term home possessing a roster without a reliable centerpiece. He is the most serious candidate to ultimately supplant Davis as the top player of the draft 10 years from now and that’s the type of talent Geoff Petrie has never shied from.

The Blazers enter their most important draft with serious choices to make since 2006 when they ended up with LaMarcus Aldridge and Brandon Roy and without a permanent GM in place. They are the most difficult team to predict because they have several needs in a portion of the draft where the best talent available repeats the incumbents.

The Bobcats and Blazers need each other’s draft chips more than their own and would represent fascinating trade partners considering Rich Cho’s brief history.

But for now we’ll pencil in Lillard, who can fill their long-suffering need at point guard while also serving as a shot creator off the dribble.

The Warriors likely have Barnes no worse than third on their draft board as he fits that small forward need immediately.

The Raptors are virtually guaranteed to have either Waiters or Jeremy Lamb as options here, potentially both. Waiters has the higher potential and more dynamic game while filling a bigger stylistic need.

Sullinger is not necessarily the best fit to play beside Greg Monroe, but there is enough skill between the two for it to be well worth the selection, especially at nine.

While Lillard is more athletic and a better shooter, Marshall is clearly the better distributor and a natural point guard. I like pairing Marshall’s size with Eric Gordon on the defensive end and there are few quality point guard prospects in 2013 and 2014. It is either now or free agency for the Hornets to address the position since their trade chips are wanting.

Portland already has Wesley Matthews at the position, but Lamb is a unique talent and has a more traditional skill-set at shooting guard.

Milwaukee has a sudden need at center as they enter their first offseason since 2005 without Andrew Bogut and Zeller will contribute instantly in similar ways.

Jones has top-five talent and if the Suns go into a full rebuild in 12-13 as expected, swinging big this far down in the lottery is an easy call. I expect Jones, however, to move up draft boards to end up closer to five than 13 as we get into June.

This represents draft position more than expected team pick since Daryl Morey has $100,000 reasons to package 14 and 16 to move up.