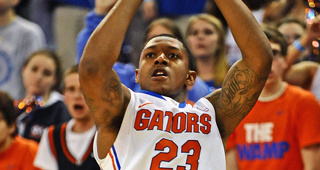 Davis is the easy pick for the Hornets and will pivot the franchise in an excellent direction even if he never becomes a true franchise player. Davis is unlikely to have as much of an immediate NBA impact as Kevin Love and Blake Griffin, but he should creep into that best young power forward in the game strata, especially if he gets to tandem with the No. 10 pick in this mock.

Robinson is the safest pick of the plethora of options available to Charlotte and has enough immediate NBA game to prevent 23-game losing streaks that completely break the spirit of a franchise. The risk for Andre Drummond is small enough for Charlotte to take him, but I like several of the center options at the top of the draft next season in Nerlens Noel and Cody Zeller to take a surer thing.

I’ve liked Beal for Washington over Michael Kidd-Gilchrist since the lottery with his superior perimeter game (understatement) and excess the team already has at small forward. The Wizards move forward with a dangerous backcourt in Beal and John Wall, plus a veteran frontcourt of moderate talents in Nene, Emeka Okafor and Trevor Ariza. The main criticism against the Wizards in their build around Wall has been character and basketball IQ, and that has undoubtedly been turned around 180 degrees.

This is a great fit for Kidd-Gilchrist and as talented as he is, he is a prospect where fit will determine the trajectory of his career. Assuming health across the board, the Cavaliers are a legitimate eight seed contender in 12-13 with the impact Kidd-Gilchrist can make on the wing with his defense and ability to score in transition.

Barnes is the antithesis of the type of players Geoff Petrie has been drafting since 2009, but he is running out of chances to take Drummond and Barnes fits a need.

Drummond has top overall pick talent at the center position, but with lower expectations and a new GM could make everything finally turn out okay for Rip City. The fit with LaMarcus Aldridge couldn’t possibly be better and this becomes your darkhorse Rookie of the Year candidate.

The karmic revenge for how the Warriors retained their draft selection within one slot of draft protection comes back here in the sense that their draft board falls off after the top-six. Golden State would laugh all the way to the Summer League with any of the six players selected ahead of them, but instead are stuck with questionable talent and fit with their immovable core pieces.

Waiters would make the most interesting impact of what is available because he creates his own scoring off the dribble and can become the pivot point for spot-up shooters in Stephen Curry at point guard and Klay Thompson at small forward (if he proves capable of playing the position).

Lillard is the best point guard draft by a wide margin and has the capacity to step in as the starter immediately. Lillard and Jonas Valanciunas should split a lot of ROY votes.

Leonard has the best potential of being starter quality of any of the remaining frontcourt players, as the Tar Heels are more energy off the bench or fifth best starter. Leonard is a phenomonel athlete and would pair exceptionally well with Greg Monroe.

In terms of actual value as a whole, I have Zeller much further down the board but his fit next to Anthony Davis is ideal and makes him a worthwhile selection for the Hornets. Davis’ value as a shotblocker comes off-ball and Zeller’s best defensive skill is holding ground and preventing players from getting to the rim.

Lamb has the potential of being a top-five talent from this draft, but selecting him at 11 for a team that already has starters on the wing enhances the eventual likelihood of that becoming a reality because he will be allowed to grow into his body.

This is still too high for Henson in my estimation, but it seems nearly impossible he slips past this pick.

The point guard prospects in 2013 are extremely bleak and while his ceiling is in the bottom third of starters at the position, he does have the upside of being a legitimate distributor and stabilizing force for a franchise that is on the cusp of needing that type of presence desperately.

I was highly impressed with how Jones came along on the defensive side of the floor and looks like he can guard NBA power forwards. His all-around offensive game and ability to run the floor fit very well with this team.

Melo has plenty of natural gifts to become a 25-minute per night NBA center and prove worthy of the draft position if the player development system he goes to is strong.

I had Sullinger in the second half of the first round in terms of true talent, and it will be interesting to see if the back issues take his stock to that place anyways. For a team like the Mavericks, an immediate contributing impact is worth more than longevity concerns.

Ross has great length and put up strong numbers on isolations, which is what Minnesota needs from the wing.

Hard to see how the Magic can pass on Rivers for a multitude of reasons if he falls to 19. This franchise is in such treacherous flux that it is impossible to predict what they’ll do in the draft.

The Nuggets drafted Ty Lawson 18th overall, so they can end up with another starter quality point guard at the same portion of the draft within a number of years. His athleticism is perfect for George Karl and would have been an easy top-10 pick as the best point guard in the 2013 class had he gone for the repeat at Kentucky.

Danny Ainge’s draft M.O. has always been to swing big and it doesn’t get bigger than White in the bottom third of the draft. He was far from efficient as a scorer, but his degree of difficulty in creating his own offense on nearly every attempt has to be factored in. There is little doubt that White can be the best individual scorer in this class and his basement is as a team’s bench scorer.

Moultrie is another higher ceiling player and would represent great value for Boston as they rebuild their frontcourt.

Harkless has been in the conversation much higher than this, but I see very little specialness here as I did with a guy like Paul George who rose late.

Even with MKG, Cleveland needs to improve on the wings and he would be a good complement as a strong perimeter shooter.

I see little chance of Taylor ever becoming a starting point guard, but he has all of the main traits you want out of a backup, especially his size to passably guard shooting guards that will allow him to play with Mike Conley on occasion.

Ezeli has legitimate center size and could become one of the better NBA backups.

Miller gives the Heat a spot-up shooter on the wing while fitting into the Riley-mold far better defensively than someone like John Jenkins.

The Thunder need more post offense and Nicholson would be an instant improvement.

No player in this first round mock had more reasons to remain in college to develop than Wroten. He has D-League written all over him at this point to tap into his latent talent and versatility.

Miller doesn’t score in any single way exceptionally well and I see no chance of him becoming a starter, but has enough skill to become a solid wing at the end of a rotation.