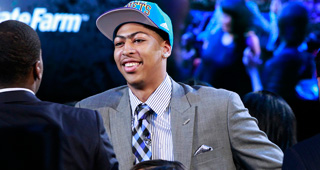 At the outset, it seems worth noting that I only grade on the moves a team makes on draft night and a short time before it. Otherwise, it would be unfair to punish or praise general managers for moves made eons ago.

Detroit Pistons: As was the case two years ago, the Warriors helped giftwrap a talented big man to Detroit. The Pistons have a foundation in Greg Monroe and Andre Drummond that could be their pathway to legitimacy as long as they can get a lead guard that can help get guys in the right positions to succeed. They also should be able to keep their pick next year since Drummond is raw enough to help keep them in the lotto for at least one more season before it is conveyed to the Bobcats. I like Kim English quite a bit for them, especially since they are in perpetual need of perimeter talent and Tyshawn Taylor was off the board.

Portland Trail Blazers: Damian Lillard made a ton of sense at No. 6 even though I could see how nicely Drummond would have fit with LaMarcus Aldridge. Lillard has the intelligence and game to be a compelling point guard for this team as they try to figure out a few other pieces. Meyers Leonard is the type of big man that can have a long, valuable career even if he does not start all the time. If he can put the work in, he could be exactly what Portland wants next to Aldridge. As long as Nicolas Batum is included in Portland’s future, they have a nice young core moving forward. Getting Will Barton in the second was a steal and it would have been nice to keep Tyshawn Taylor instead of dumping him to the Brookyln Nets.

Charlotte Bobcats: They took the plunge and took the best player available, and I commend them for it. Gerald Henderson has not been good enough to scare a team away from taking a superior talent like Michael Kidd-Gilchrist, especially since he is such a fantastic team guy and has a clear-cut NBA skill. It’s hard to tell what they could have acquired in a trade, so I cannot grade them down for it. Jeff Taylor was a strong value where they took him and it is intriguing that Charlotte now has two strong perimeter defenders who should be rotation players at worst.

Brooklyn Nets: Getting Tyshawn Taylor should have a nice impact on the Brooklyn squad whether or not Deron Williams decides to return. His talents will allow him to stay in the league for a while and getting him for just money makes it so much better. Tornike Shengelia is a wise draft and stash.

Oklahoma City Thunder: They were not going to do much better than Perry Jones with the No. 28 pick. His tremendous upside and their lack of need for a major impact player makes the pick a better one than for other teams because they can take a gamble.

Chicago Bulls: Marquis Teague just made too much sense for the Bulls to pass him up. His ability to step in and contribute at point guard and eventually thrive in a backup role works incredibly well for what Chicago needs, especially if they were looking to save money by not re-upping C.J. Watson.

Philadelphia 76ers: Maurice Harkless fits too well in Philadelphia's system to pass up and makes it possible to make a corresponding move should they desire it since he does overlap with a few of their players. Getting a quality talent like Moultrie for the price they paid should work out nicely.

Washington Wizards: Thanks to the Bobcats, Washington got the guy they wanted all along. Bradley Beal is an excellent complementary piece next to John Wall and gives the Wizards a cohesive enough starting lineup to actually have a decent shot of making the playoffs here. Tomas Satoransky should end up being an okay pick, yet there were more immediate impact players available.

Golden State Warriors: Harrison Barnes was the responsible pick. It was surprising that both he and Drummond were available at No. 7, and I can see the concept of getting a quality player at a need position over a gigantic question mark. If he can play off the ball and hit shots on offense, he will fit right in with the Warriors. Draymond Green was a nice pick despite there being better players on the board. He should be able to find a role with the Warriors. The Warriors also took my favorite second round Euro in Ognjen Kuzmic- he’s the closest thing to Omer Asik in this draft.

New Orleans Hornets: They took two of my favorites in this draft, so that means they did very well. Not a ton of points for taking the obvious No. 1 pick in Anthony Davis, though he will do well there. I like Austin Rivers as a player even though the fit with Eric Gordon should be tenuous at best. That said, the only decent point guard in this class was gone, so going with their BPA makes a ton of sense.

Boston Celtics: While I was incredibly low on Jared Sullinger, there are few teams better suited for him than the Celtics as long as they keep playing slow when the Big Three (non-Rajon Rondo) eventually make their way out of town. Fab Melo can be a difference-maker for them sooner and later while playing a position of value. Danny Ainge then took a second Syracuse guy in Kris Joseph.

Denver Nuggets: While they could have gone bigger boom/bust with a guy like PJIII, EvanFournier should work well within their system and gives them a little flexibility in terms of when they bring him over. Solid but unspectacular pick. I really, really like taking Quincy Miller in the second- the right type of risk for Denver to take.

Houston Rockets: It seems like it has to be a work in progress because their talent makes no sense with itself. They have a million power forwards and a few too many shooting guards as well. That said, they received nice value in Jeremy Lamb and took more understandable risks in Royce White and Terrence Jones (if they keep them).

Sacramento Kings: Thomas Robinson is a fine pick, but I am not nearly as in love with it as many people are. The biggest problem there is one of spacing- since Robinson does not have a jumper yet and you need Cousins to not have an excuse to play outside, Thomas needs to develop something to make the team harder to defend in the halfcourt. Selling the fifth pick of the second round for cash is shameful, especially with the talent available.

Orlando Magic: Andrew Nicholson is the type of unspectacular pick that happens in the late first. Not in love with him as a player yet a respectable selection. Big fan of Kyle O’Quinn for where they got him.

San Antonio Spurs: They were able to dump Richard Jefferson’s deal and did not miss out on any elite talent. An incomplete since the trade was pre-draft, but a good Incomplete considering the savings. San Antonio did pick up Marcus Demon at 59.

Memphis Grizzlies: Considering the guys who were around (mostly power forwards like Jones and Moultrie), Tony Wroten makes a fair amount of sense for Memphis. They’ll need plenty of shooting at the other perimeter spots to offset Wroten’s broken jumper while his defense and passing could be a nice help.

Utah Jazz: An incomplete. Kevin Murphy should contribute there, though.

Los Angeles Clippers: Incomplete (finishing off the Eric Bledsoe trade of 2010). Taking the Turkish big is justifiable even though they still need depth in the immediate.

Los Angeles Lakers: Not sure Darius Johnson-Odom or Robert Sacre will make an impact but you have to commend the effort.

Toronto Raptors: They took a guy in Terrance Ross that I like quite a bit, yet it feels like they could have traded down and gotten him after getting a few extra assets. Quncy Acy in the second round may be the most stupefying pick of the entire draft.

Dallas Mavericks: Loved the value of moving down, but did not love what they did with it. Jared Cunningham has a ton of flaws that cannot be corrected. Crowder and James should be solid players for them but guys like Will Barton could have been bigger difference-makers.

Indiana Pacers: I did not like either of their picks from a value perspective. Miles Plumlee is fine as a backup center, but there were so many good players still on the board at that point. Similar with Orlando Johnson- not a bad pick, but not the best pick. That said, they got him for cash, which makes it a good move.

Atlanta Hawks: John Jenkins has an NBA skill as a perimeter shooter- that’s for sure. The problem is that he needs to show a whole lot more to get playing time on a playoff team, even if Joe Johnson can slide over and guard threes some of the time.

Miami Heat: Considering the Sixers pick is unlikely to be a meaningful lottery selection, the Heat could rue the day they passed on adding PJIII or Moultrie. Either would have been an interesting fit.

Milwaukee Bucks: Like the Rockets, Milwaukee seems keen on collecting players at less valuable positions. Henson has many gifts, yet very few of them go along with playing the center position in the NBA. That’s similar to both Larry Sanders and Ekpe Udoh. Doron Lamb should be a nice fit with that team since he can shoot and do a little bit more to fit next to Brandon Jennings.

Minnesota Timberwolves: Not a big Chase Budinger fan, especially since he becomes a free agent (and thus not structurally underpaid) sooner and does not answer any of their major questions at the swingman spots.

New York Knicks: Kostas Papanikolaou should be fine if he comes over, yet the Knicks need an instant impact instead of an eventual one. Not a big cost because of where he was picked but disappointing anyway.

Phoenix Suns: Beyond the simple shock of Marshall going over both John Henson and Tyler Zeller, the fact of the matter remains that he will have to do a lot to show that he can be a starter in the NBA. Luckily, he will get plenty of chances since the Suns have depth issues in the backcourt as long as Steve Nash is getting a new address this summer.

Cleveland Cavaliers: I just do not get the love for Dion Waiters. He could end up being a nice player, yet has not shown in college that his game will transition that well to the NBA. After all, pinball collegiate players do not exactly have the best track record in the league. I dig his swagger and he will need to be able to hit open shots everywhere while defending his position well to be worth taking over the talents still on the board.