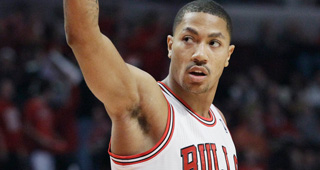 DEERFIELD, Ill. – From stars joining forces to major-market teams making blockbuster trades over the past few years, Derrick Rose has paid attention to it all. His mindset never changed during that span: If players want to play with him and the Bulls in Chicago, they have to come on their own prerogative. But this summer – as stars continued to team up and major-market organizations made blockbuster trades – Rose felt it was necessary to go out of his way to send a recruiting pitch, a total shift in his makeup.

As he rehabilitated his torn ACL during the offseason, Rose called then-free agent Kirk Hinrich twice, an opportunity for the former backcourt mates to renew their bond. The two made up for lost time, questions being tossed back and forth, and Rose knew Hinrich still had the same fire as before. Rose hated to see Hinrich leave in 2010, never mind the fact that he was dealt away for cap space as the Bulls chased after LeBron James and Dwyane Wade, Joe Johnson and Chris Bosh.

As much as Rose talks about wanting to stay out of the front office’s personnel moves, he reinforced a clear message on Monday afternoon: Bring me players who are immensely passionate to join the Bulls, not through trade but through desire, and we’ll deal with whatever outcome.

Basketball is an unpredictable sport, a big reason Rose loves the game so much. He openly asked why the Bulls can’t contend this season, why a team that bases its principles on defense and rebounding wouldn’t have a shot – similar to when he wondered aloud in 2010 why he couldn’t be the best player in the NBA.

Yet, the Bulls totally reconstructed their roster over the summer, with Taj Gibson as the lone reserve coming back. Their depth clearly took a hit after the organization decided to part ways with valuable contributors in Omer Asik, Kyle Korver, C.J. Watson and Ronnie Brewer. And mostly, Rose’s absence for a significant chunk of the season has placed the Bulls as a team no longer feared like a contender.

There was cautious optimism in the air Monday when Chicago opened training camp. Yes, the Bulls will experience tough times this season, but behind Tom Thibodeau’s system and proven players such as Luol Deng, Joakim Noah and Carlos Boozer, it is certain that they will be in the playoff hunt and perhaps compete for a high seed in the Eastern Conference.

Rose, for his part, fully knows the hardships that will not only come physically with his rehab, but also the mental toll he’ll take missing games. He badly wants to be out on the court with his teammates, but reality is that he will have to remain patient and diligent in his rehab. While Rose is two weeks away from cutting and jumping, a milestone in his eyes, he will ultimately need to show the Bulls’ doctors and trainers that he’s ready to come back.

“I wish I could be at training camp right now, but I can’t,” Rose said. “It’s not whenever I’m [feeling] ready. I’m going to have to prove to them that I feel all right. Right now, I’m not at that stage.

“There’ve been times where I’ve felt that I can jump, play around and do all these things, but I might injure myself [so] I try to stay away from that.”

Of course, no one surrounding the Bulls – from the hierarchy to coaches to players – has a reputable, solidified prediction as to when Rose will return. Rose admitted he’s hopeful that his comeback will be after the All-Star break, but even so, he doesn’t know which twists and turns might unfold as this rehab process wears on. As of now, he plans to stay around his teammates as much as he can.

Eventually, Rose will return and the Bulls could find themselves in the midst of a stellar late-season run. He knows how much his team lost during the offseason, players who personified the level of hunger and loyalty that Rose admired in Hinrich. The league consists of super teams, but Rose is a different type of star in this era. A player can have all the talent in the world, but if he doesn’t fit Rose’s standards as someone who will stay reliable and trustworthy through the ups and downs, Rose sees no use.

So, when Hinrich’s return was within reach this summer, Rose gave him his own recruitment, a first-time accomplishment for a superstar who refused to call two of the past decade’s premiere free agents, James and Wade, a couple summers ago.

“Kirk is the first person I recruited,” Rose said. “He’s been a winner all his life and I know we’re going to go be good together.”

Quietly, Rose is just as involved in the Bulls’ decisions staying private as he would be if he were vocal. His thirst for a championship is apparent – “I want to win a championship so bad,” he said – and he’s made clear over and over the criteria his teammates must meet. Slowly, the 2011 league MVP is also beginning to accept the idea of recruitment, but on his terms.