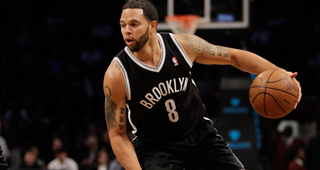 Good News: Ray Allen is a future Hall of Famer, but Boston should be able to replace him without missing a beat, even with Avery Bradley out indefinitely after surgery on both shoulders. Jason Terry will give them elite three-point shooting and explosive scoring off the bench, while Courtney Lee, at 6’5 200, has the shooting and athleticism to fit seamlessly into their starting five.

Bad News: Injuries to Derrick Rose and Chris Bosh in last year’s playoffs gave the somewhat misleading impression that Boston is still a legitimate title contender. But when Chris Bosh returned in the Eastern Conference Finals, the Celtics were undone by a simple dilemma: Kevin Garnett could either protect the rim against the drives of LeBron James or defend Bosh on the perimeter, but not both. Without a second elite defensive big man, the Celtics can’t beat a healthy Miami team in a seven-game series.

Real Talk: Rajon Rondo is one of the most unique players in the NBA, a PG who can dominate as a passer, rebounder and defensive player but struggles with shooting and scoring. While he doesn’t have Jason Kidd’s size, his 6’9 wingspan allows him to have a similar impact on the game. Kidd has extended his career into his 40’s by developing a three-point shot; Rondo has the chance to do the same.

Good News: Miami was the best team in the NBA last year. There’s no shame in losing to them, even in the first round. The Knicks had one of the most rollercoaster seasons in NBA history in 2012, but as long as Carmelo Anthony and Tyson Chandler can stay healthy, they should win enough games in the regular season to avoid an early round matchup with the Heat.

Bad News: Both Carmelo and Amar'e Stoudemire are most comfortable in the mid-to-high post region and they both need a shot-blocking center like Chandler to protect them defensively. Since Chandler has to play near the rim offensively, there isn’t enough spacing on the floor for both of New York’s stars to be at their best. Amar'e will either need to become a second unit scorer, or develop a three-point shot for this to work.

Real Talk: Jason Kidd is a marginal NBA player at this point in his career. He’s a spot-up shooter who doesn’t have the footspeed to penetrate offensively or stay in front of his man on defense. In the Thunder’s first round sweep of the Mavericks, Dallas hid Kidd on Thabo Sefolosha defensively so that he could average 11 points a game on 36% shooting. He’d be more valuable to the Knicks as an assistant coach than a player.

Good News: For the first time since Allen Iverson’s departure, the 76ers have a legitimate franchise player in Andrew Bynum. He’s a 25-year old, 7’0 285 center who averaged 19 points, 12 rebounds and two blocks on 56% shooting in 2012. Championship teams are built around players like that.

Bad News: Bynum has missed parts of four of his first seven seasons in the NBA with serious injuries. He was held out for the first three weeks of training camp after recovering from experimental knee surgery done to “stimulate healing in arthritic-affected areas in both his knees”. Isn’t he kind of young to have arthritic knees?

Real Talk: Of all the power forwards on the 76ers' roster, first round pick Arnett Moultrie is the best fit with Bynum. He was an absolute steal at No. 27: a long and athletic 6’10 230 big man who can protect the rim, defend out on the perimeter and knock down a mid-range jumper. Miami is going to regret giving him away for a future first round pick.

Good News: Deron Williams (6’3 210) and Joe Johnson (6’7 240) are the biggest and most physical backcourt tandem in the NBA. Opposing teams aren’t going to have anywhere to hide their smaller guards, and with a frontcourt full of players (Brook Lopez, Gerald Wallace) who can pass and finish, Brooklyn should have an excellent offense.

Bad News: They’re going to need to score a lot of points, because they’re going to have a hard time stopping anyone with Lopez and Humphries “protecting” the rim. Dealing the No. 6 overall pick for a half-season of Wallace, when Wallace would have come as a free agent anyway if the Nets were that insistent on overpaying him, was one of the more bizarre bits of roster management in recent memory.

Real Talk: Nets fans gave me a lot of grief for suggesting they pick up Andray Blatche last year, but I guess I wasn’t completely insane. Blatche has got all the talent in the world at 6’11 260; a change of scenery may serve him as well as it did former teammate JaVale McGee. Maybe he works out or maybe he doesn’t, but it’s definitely worth taking a chance to find out.

Good News: After a brutal two-year bottoming out process in the wake of Chris Bosh’s departure, Toronto fans finally have a talented young core to get excited about: Kyle Lowry made the leap towards becoming an All-Star caliber player in 2011, Jonas Valanciunas has the chance to be a high-level 6’11+ big man and Terrence Ross was one of the most undervalued prospects in this year’s draft.

Bad News: They gave up next year’s first-round pick to acquire Lowry, but they’re not ready to be a playoff team yet. Valanciunas is still only 20 years old, while none of the players coming back -- Andrea Bargnani, DeMar DeRozan, Ed Davis, Amir Johnson -- exactly set the world on fire in 2011.

Real Talk: Landry Fields is a solid 6’7 215 wing who can stretch the floor without being a liability on either end. He won’t kill the Raptors when he plays, but he’s a seventh-or-eighth man who is best suited to buying time for more talented players to rest. That’s a skill-set you can find in the D-League if you know where to look; there’s no real need to give him a three-year $20 million contract just because he played in New York.