What Happens When No One is Back? 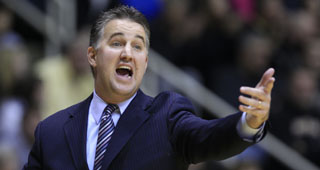 Ken Pomeroy and I released our rankings this week. If for some reason you haven’t reached your fill of geek week material yet, allow me a few additional words.

Why I Gave Up Returning Minutes

This April, I used a returning minutes model and foolishly predicted that Vanderbilt would be an upper-division SEC team. But I'm not alone. Ken Pomeroy’s model just generated the same result. He has Vanderbilt at 9-9 and in 6th place in the 14 team SEC. Clearly we both needed to “watch more games” and “do some research”.

But actually, what we needed was a better model. A key limitation of a returning minutes model is that it assumes that teams that lose a certain value of player all fall the same amount. And because of averaging, there is essentially a limit to how far any team can drop in a given year. Vanderbilt lost its entire rotation, dropped quite a bit in both models, but was still pegged to stay in the top half of the SEC.

Similarly Wichita St. lost 5 of the 7 players in its rotation and will clearly be having a rebuilding year. But in Ken Pomeroy’s current projections the Shockers are 46th in the nation and projected to finish in 2nd in the MVC. Wichita St.’s prediction is so disconcerting it kept Ken awake at night.

And as I stared at teams like Vanderbilt and Wichita St. this spring, I knew that their predictions were built on a house of cards. There simply weren’t the players in the lineup to support that strong a ranking for these teams. And so I began the process of developing a player-based, lineup-based model.

And when you actually look at who Kevin Stallings is planning to use to supplement his lineup at Vanderbilt, I think there are real questions. Stallings did not bring in any elite recruits. He did not bring in any JUCO players to stem-the-tide. He did not bring in any D1 transfers. What he is basically leaning on is one efficient player (Josh Henderson), and three former Top 100 recruits who have a lot of potential, but who have been extremely underwhelming statistically in limited minutes (Ron Odom, Kedren Johnson, Dai-Jon Parker). That’s simply not enough to generate a seven or eight-player rotation that should be able to compete in the upper division in the SEC.

And if you look at the big discrepancies between Ken’s model and mine, differences in who will step into the lineup explain almost all of those. I have Butler, Missouri, UCLA, USC and Utah meaningfully higher because of transfers. And I have Vanderbilt, Wichita St. and Penn significantly lower because of meaningful questions about who will step into the lineup for those programs.

But there is another key point here. Coaches are not idiots. They can see what they have, and they will do their best to try to fill weaknesses. Remember those three high potential players I listed above for Vanderbilt (Ron Odom, Kedren Johnson, and Dai-Jon Parker). If Kevin Stallings had seen those guys in practice last year and saw that they were going to be woefully underprepared this season, he would have presumably hit the recruiting trail a lot harder this off-season. Coaches know what they have, and the last thing they want to do is spend a season being embarrassed on the basketball court.

So maybe there is something to the idea that Vanderbilt does have a typical, expected level of replacement player available. It would not surprise me if looking at the player level is unnecessarily pessimistic. Sure no one in the Vandy lineup is a guaranteed star, but there might be more there than what my model believes.

Even in a situation where I’m pretty sure the returning minutes model is far too optimistic, the true answer may very well lie somewhere in the middle. And that is why there is always value in different predictions models and independent evaluations of the information.

A Pair of Bubble Teams

I feel like the lineup projections may sound too vague at this point, but allow me to illustrate the results with a couple of bubble teams. One team that seems to be perennially on the bubble is Ole Miss. With four starters back, two strong JC players joining the team, and a solid offensive coach, Ole Miss players should be more efficient across the board this year.

Only forward Terrence Henry leaves the team. His minutes will likely be replaced by Demarco Cox. That’s a nice upgrade because Henry was not a terribly efficient player and Cox has high potential as a Top 100 recruit out of high school. Aaron Jones is unlikely to see his minutes increase substantially because he is such a passive offensive player, but he is another option in the paint. The more likely scenario is that JUCO transfer Jason Carter will also take some of Henry’s minutes.

Marshall Henderson, one of the top JUCO players in the nation is probably even a little under-rated in this evaluation, but he too will help supplement the offense. And the Rebels will not have to give too many minutes to freshmen. The model projects Derrick Millinghaus will spell Jarvis Summers at PG here, but the rest of the lineup is so strong, the other freshmen may have to wait.

Mississippi’s offense is expected to improve from 104.1 to 109.5 which is a substantial improvement. The team doesn’t have any superstars, but there is enough offensive balance to still be very good. So why aren’t the Rebels a lock for the NCAA tournament? The real problem is Andy Kennedy’s defense. In his career, Kennedy has never been able to achieve a defense better than 62nd in the nation, and the model expects something similar this season.

On the flip side, Purdue’s offense is really starting to slip at this point. Purdue loses the three players with the most minutes last season, and all three were vital to the offense. Terone Johnson played the most minutes of any returning player and he is an obvious starter along with DJ Byrd who was a dominant three point shooter last season. Travis Carroll also projects as a starter.

But after that the freshmen are going to have to play. AJ Hammons and Ronnie Johnson were consensus Top 100 recruits and look like natural starters at center and point guard.  But they will make a lot of mistakes playing this much in year one. And then we really get to the uncertain underclassmen. It is hard to imagine that Robbie Hummel, JaJuan Johnson, and E’Twaun Moore were once part of the same recruiting haul, because Matt Painter has really run into problems finding quality pieces to replace those players. Looking at last year’s pair of freshmen, Anthony Johnson struggled shooting the ball, and his poor free throw percentage suggests he has no natural touch. And Jacob Lawson was terribly weak in the paint. The rest of this year’s freshmen are just too far down the recruiting rankings to expect efficiency in year one.

(Final Note: The only scholarship player not listed for Purdue, Sandi Marcius, just doesn’t look like a Big Ten player based on his last two seasons of statistics.)

If Purdue’s defense is as bad as last year, they won’t even be in the NCAA tournament discussion. But defense has traditionally been Matt Painters calling card. I expect Purdue’s defense to improve enough to keep the team in the NCAA hunt, but the offense just has too many question marks to predict an NCAA bid at this point.