Confidence, Clutch Play, And What It Means When Everyone Is Back And The Team is Struggling 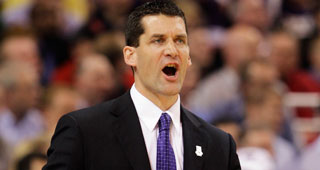 Today, I want to start with a simple table. I am going to list high major programs with a substantial number of returning minutes and contrast their performance last season with their performance this season. I not only show their Pomeroy rank in both seasons, but also the change in their Pythagorean winning percentage. The first table confirms what we all know. When teams return a lot of minutes, typically they play better the following season.

Note: In the table I list returning possessions instead of minutes because possessions tend to be a better measure of value. This reflects all games through Dec. 24th.

This table does not always tell the whole story. Rutgers is probably still a little disappointing because the Scarlet Knights not only return a lot of key pieces, they added a transfer who was a former Top 20 recruit out of high school. On the flip side despite returning all the key players, Indiana is integrating some key freshman into the lineup, so maybe the Hoosiers should have been expected to struggle a bit early in the season. But for the most part, the results in this first table are about what we expect. These teams returned a lot of players and have been playing better.

But not all high major teams that return their key players from last season can say that. The teams in the next table brought nearly all the key pieces back and still haven’t performed up to expectations. In some cases, injuries and off-court issues can explain some of the puzzling results. South Dakota St. was without Nate Wolters in the team’s blowout loss to Minnesota. Drexel has lost Chris Fouch for the season. Long Island nearly lost its team in the off-season to suspension before the players were re-instated, and recently lost star Julian Boyd to injury. I suspect those issues have contributed to these teams poor early season performance. But not everyone has an excuse for poor early season play. Davidson was almost universally expected to play better this season, and so far Steph Curry’s former team hasn’t delivered.

For teams in major conferences, the good news is that they will still get chances to prove themselves in conference play. But for teams in non-power conferences, November and December are often the only time these teams can earn an at-large bid. On paper, they wanted to upset a few inexperienced high major teams, put together a nice resume, and use the early season resume to sneak into the tournament in March.

Unfortunately, that has not happened. Northern Iowa has two wins against Pomeroy’s Top 100, but already has 5 losses. Ohio has two quality wins and four losses, but one of those was a devastating loss to Winthrop. Robert Morris has rebounded some after a terrible start to the season, but their only quality win is against Ohio, and they have five losses after losing to Arkansas this week. Davidson must trade a win against West Virginia against five losses. Drexel has two quality wins (against Princeton and Davidson), but with seven losses, the preseason CAA favorites look like they will need an automatic bid to go dancing this season.

A Crisis in Confidence?

I spoke to someone who follows the Northern Iowa program closely to ask why the program is struggling. They claimed the biggest problem right now is that the team is lacking confidence. And it really starts with 6’9” forward Jake Koch. Koch was brilliant as a sophomore and was the team’s best post player. He got to the free throw line, made 46 threes, and posted a solid 108.4 ORtg. This followed up on the 111.8 ORtg Koch posted in limited minutes as a freshman. Northern Iowa certainly expected him to be one of their best players as an upperclassman. But starting in the middle of last season, Koch’s outside shot stopped falling, and he hasn’t regained that touch this year. Instead, there have been plenty of plays this season where Koch has been wide-open and simply refused to take the shot. Koch has lost his confidence, and that is hurting the team’s offensive balance.

Similarly, guard Anthony James probably shot too much last year. He took 32% of the shots when on the floor and his ORtg fell because of it. The coaching staff appears to have told him to be more selective this season. And because of a three game suspension to start the season, he also got a late start working with his teammates. The net result is that James is shooting less this year, but somehow his ORtg has gotten worse. Now only taking 26% of the shots, his ORtg has fallen to 83.5.

Basketball is simply not a game where you can play tentatively. Koch and James lack of aggressiveness has hurt the team on offense and seemingly becomes the team’s identity in other areas. The net result was that against UNLV, Northern Iowa didn’t have the hustle and aggressiveness we normally take for granted. The team’s effort in going for rebounds and loose balls simply was not there.

We often wonder why teams schedule so many cupcakes to start the year. It can be frustrating to watch so many boring games. But the reason coaches do this is that so that players continue to buy into the system and have confidence that they can succeed even when adversity strikes. Northern Iowa put together a very tough schedule expecting this to be the year they could earn an at-large bid in November and December. Instead all they have created is a team that doesn’t really believe they can beat good teams. Perhaps a weekend win against St. Mary’s will help change that trend. But at this point, the Panthers no longer look like a legitimate challenger to Creighton for the MVC league title.

Is It Confidence or Just Random Noise?

Last week I read Ken Pomeroy’s excellent take-down of clutch free throw shooting. Pomeroy eloquently stated that most misses in the final minute are simply random chance. Attributing free throw misses to a character deficiency such as “not concentrating” is almost certainly illogical.

I love this type of article because there are so many elements I agree and disagree with. First, I disagree with the premise that we should not track clutch free throw shooting. This information is still important because it gives us important context on the season. If a team lost three close games because Player X didn’t hit his free throws late, and then the team holds on to win a game when Player X makes 4 free throws in a row, I think that is an important context to describe. For predictive purposes the close losses may be nearly equivalent to the close win. For predictive purposes, the overall free throw percentage may be more important than the past free throw shooting in close games. But people don’t just monitor sports for predictive purposes. They follow sports because they care about wins and losses and why they happened. And thus this information is still important.

On the other hand, I agree with the concept that sports analysts far too often emphasize clutch play when what we are observing is probably random chance. And perhaps I am equally guilty. Above I wrote about how Northern Iowa is lacking confidence and that is hurting their aggressiveness. It is fair to argue that all I am observing is random outcomes over the course of the season. I may be looking for deeper meaning where none exists.

But I disagree with the idea that psychology does not impact player performance. Here are four statements that I certainly believe to be true.

If you look at the sociology, psychology, and medical literature, I am sure you can find evidence of all four of these statements. If someone receives a cancer diagnosis and is pessimistic, they are more likely to have worse outcomes.

And all four almost certainly matter on the basketball court as well. If you are playing a cupcake opponent and your attitude is that you are going to win by 20, you do not put in the same level of effort that you put in when playing your biggest rival.

Because of the last two items listed (emotion and stress), I do believe there is such a thing as clutch play. I do believe there are circumstances where under stress, and feeding off the emotion of the crowd, players can do unusual things.

Of course many of these emotion-driven outcomes may not be repeatable. At the end of the game, a player might get an adrenaline boost from the crowd. And that might help him overcome his exhaustion and get more lift on his three point shot. But nothing tells us whether the added lift helps or hurts. On some days it might help make him more accurate. On other days, it might cause him to have too much energy, shoot the ball too far, and actually make him more likely to miss his shot.

Clutch play may also not be measurable. Given the small sample sizes, and large amount of noise, even if a player has an unusual outcome (like Nate Wolters), that may not mean anything. If you have a normal random distribution of outcomes, there will be some players who perform far below the mean for a period of time, even though they have no true deficiency. I certainly believe random noise outweighs clutch play in a lot of settings.

(This is particularly true with free throw shooting as in the Pomeroy article. Free throw shooting is largely a repeated motor skill. You will succeed or fail at it depending on whether or not you have trained your muscles to repeat that skill over and over again. Certainly emotion might matter a little in how accurate a player is at shooting free throws. But if I were to look for clutch play, I would assume free throw shooting would be just about the last place we could find solid evidence of it.)

One of the reasons clutch play may be hard to measure is that most of the players who have stress-related deficiencies have been weaned out of basketball before college. It isn’t too hard to find high school players who can make a lot of shots in practice, but who can never make a shot when 80 people are watching in the game. But these players never get a scholarship offer. In fact, college and pro players are a very select sample who have thrived and excelled in pressure situations. And thus in this sample, finding players who fail in the clutch may be even more impossible.

But none of these measurement issues convince me that clutch play does not exist. And I would argue that sports’ writers should not abandon writing about emotion, stress, attitude, or confidence. Almost certainly we over-indulge in emphasizing these factors when random noise is probably the best explanation. But I truly believe all these factors still have a place in impacting game outcomes, and I look no further than Mike Krzyzewski for justification.  In describing LeBron James at the Olympics, Krzyzewski said this:

“Over the years LeBron has learned that it’s not just what a leader says but how a leaders looks that counts. It’s the nonverbal communication that can sometimes carry the day. His body language and facial expressions were so strong that day. He put us on his back.” – Lee Jenkins 12/10/12 edition of SI.

If one of the most decorated coaches of all times believes that body language and confidence can impact outcomes, I am going to continue to believe those factors matter.