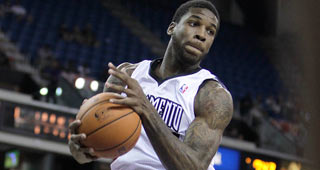 Coming into this year’s draft, Thomas Robinson was considered one of the most “NBA ready” prospects available. An athletic 6’9 240 forward coming off an All-American season at Kansas, he had a defensive position (the 4) and a skill (rebounding) that would immediately translate to the next level. But while Robinson’s collegiate statistics were eye-popping, the holes in his game meant he would only be effective in a limited number of roles in the NBA, at least initially. The Sacramento Kings passed on several players with substantially higher upsides to make the “win now” selection in Robinson; eight months later, they dealt him to the Rockets for pennies on the dollar.

In a draft where Damian Lillard went No. 6 and Andre Drummond went No. 9, you would like to get a little more out of the No. 5 pick than Patrick Patterson, Toney Douglas and Cole Aldrich. Patterson has some value as an undersized stretch 4, but he’s a role player in his third season set to become much more expensive in the near future. With more talented players behind him in Houston, the Rockets would have been looking to give him away this summer. And while Robinson will be a more useful player in Kevin McHale’s uptempo system, he will probably never be a frontline starter. When the Kings selected him, they were thinking short when they should have been thinking long.

From an on-court perspective, Robinson didn’t make much sense for the Kings. DeMarcus Cousins is a low-post center who can’t protect the rim, so his ideal frontcourt partner is a shot-blocking power forward who can space the floor from the three-point line. It would be hard to find a worse fit than Robinson, an undersized big man without a consistent perimeter shot. Instead of making each other better, they made each other worse: they couldn’t co-exist defensively or get out of the other’s way on offense. As a result, with Cousins averaging 31 minutes a night, Robinson slowly slipped out of the rotation.

He will have a better chance to showcase his game with the Rockets. Rather than running an offense built around a post scorer, the Rockets spread the floor and attack with a barrage of pick-and-rolls. Robinson’s speed and finishing ability make him an excellent roll man and the four-out offense creates a lot of room for him to attack the basket. Not only is he now on the receiving end of James Harden’s passes, their breakneck pace (No. 1 in the NBA) gives him more chances in the open court. He’s more effective in transition, where he can use his speed and athleticism to his advantage, than in the halfcourt, where his lack of skill can be easily exploited.

All that said, Houston isn’t a perfect fit for him either. Since he can’t consistently knock down a perimeter jumper, it’s hard to play him and Omer Asik at the same time. The Rockets' offense is based around spacing the floor, and neither Robinson nor Asik can make a defense pay for leaving them open 15 feet from the rim. Asik is the only thing preventing their defense from collapsing in on itself like a neutron star, meaning Robinson will have to learn to shoot to play 30+ minutes a night with Houston. With the Kings, he had a 34% effective field goal percentage outside of 10 feet. Right now, he is best used as a small-ball 5, which means that if another team has a quality 6’10+ post scorer who can punish his lack of size down low, it’s going to be hard to find him minutes.

Developing an outside shot will be crucial for Robinson’s career. Since he’s unlikely to ever develop into an elite shot-creator, either with his back to the basket or off the bounce, a consistent jumper is the only way he can play as a power forward. When he plays as a 4, he can use his lateral quickness to defend in space on the perimeter; when he plays as a 5, he has to be an interior defensive presence and a rim protector. In college, he only averaged 0.87 blocks a game and outsourced defensive responsibility to Jeff Withey. That’s not going to work in the NBA, particularly when his skill-set demands a more offensive-minded big man next to him. He’ll have a long pro career regardless, but he’ll be a third big man if he doesn’t become more skilled offensively.

Robinson may have been more NBA ready than many of his peers, but that really isn’t saying all that much. For 99 percent of rookies, the first year in the league is mostly about survival. Not only have they just received a life-changing amount of money, but they have to become accustomed to the grind of an 82-game schedule. Players from BCS conferences might see an NBA-caliber player at their position once or twice a month; in the NBA, they match-up with multiple NBA-caliber players every single night. Their heads are spinning so fast that it seems unfair to even ask them to learn the complicated help-side defensive principles they never had to bother with in college.

If a team is depending on a rookie to be a foundation piece, they aren’t going to be very good. If they need a first-year player to be a complementary piece, he won’t be the one who pushes them over the top. There are situations where a rookie can fill a minor role on an elite team, like when the Heat drafted Norris Cole to match-up with smaller second-unit PG’s in 2011. Even if there was a higher-upside player on the board, Miami made the correct decision in taking a guy who gave them minutes in the NBA Finals as a rookie. However, for the most, there’s really no reason to draft a player based on what they are going to do in their first year.

When a player reaches the end of their rookie contract, what they’ll be able to do as they enter the prime of their careers is far more important than what they’ve done at the beginning. Coming out of UCLA in 2009, Darren Collison and Jrue Holiday both slipped in the draft. Holiday fell to No. 17 because he was many years away from his ceiling; Collison fell to No. 21 because there were questions about how high his ceiling was. Four years later, Holiday is an All-Star and Collison is falling out of favor with his third different team. Does it matter if Collison was a substantially better player in their rookie season?

Before this year’s draft, everyone acted like Andre Drummond was the biggest gamble on the board because of the lack of polish in his game. In reality, the real gamble was passing on a 6’11 270 monster with his type of freakish athleticism. If Sacramento had taken Drummond, he could have formed one of the biggest front-lines in the NBA and perhaps even made Cousins expendable down-the-road. Because the learning curve for rookies is so steep, drafting players is like shopping for a new car: they lose half their value once you take them off the lot. And if you go into the draft expecting that they will all need time to develop, you might as well take someone who can develop into something special when you get the chance.