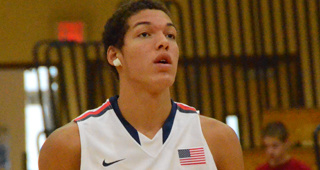 Virginia: I am worried about this Virginia projection. It depends critically on how Top 100 recruit, freshman point guard London Perrantes plays. But on paper, everything is coming together for Virginia. They have their three top scorers (really the only guys who scored at all), back from last year. Former Top 100 recruit Mike Tobey should be ready for that sophomore year leap in production. They add depth with South Carolina transfer Anthony Gill. Malcolm Brogdon (who missed the entire season) and Darion Atkins should be back healthy. And Virginia played very good basketball in conference games last year.

Georgetown: Greg Whittington should return from an academic suspension, incoming transfer Josh Smith is a dominant offensive player, and Georgetown brings back the majority of the players from a dominant defensive team. Thus picking the Hoyas for the Top 25 makes sense even without Otto Porter. But I am very concerned how much the offense will depend on mid-year transfer Josh Smith. Smith is a natural offensive player, and seems like the perfect high-post player to make the Georgetown offense flow. But will he be able to integrate into the lineup (and get in shape) for a 3 month run? Statistically he looks like a good fit, but betting on Josh Smith has been a bad bet the last two seasons.

Iowa: Iowa isn’t going to blow you out of the water with Top 100 recruits. But the majority of the lineup that went to the NIT final will be back. The time for winning is now. Don’t forget that the team welcomes Wisconsin transfer Jarrod Uthoff.

Ohio St: The loss of DeShaun Thomas shouldn’t hurt the Buckeye defense that much. And because players like Sam Thompson and LaQuinton Ross are only starting to show signs of how good they can be, the offense might not slip that much either.

Colorado: Another very young but talented team last year. People are raving about how good Josh Scott could be in 2013-2014.

Memphis: The five Memphis seniors are great players and this might be Josh Pastner’s best team. But the addition of a dominant recruiting class should be the x-factor that gets the team deeper into the tournament this year. If Tarik Black transfers (which is speculated), Memphis might fall a little bit in these projections, but not that much. This team has depth.

Creighton: They are only here if Doug McDermott comes back.

Connecticut: The best thing about your seniors transferring out is that all your main talent has eligibility left.

Syracuse: On paper they have the pieces they need to replace their departing stars. Duke transfer Michael Gbinije should be a nice wing player to replace James Southerland. Tyler Ennis can step in at point-guard. But if Michael Carter-Williams isn’t back (what I project above), Trevor Cooney is still going to be logging major minutes. The lack of options on the perimeter is still a concern.

UCLA: The Wear twins are going to be seniors next year. It only seems like we’ve been talking about them forever because of the transfer season.  I’m assuming Kyle Anderson sticks around, because where is he going to go? Between Anderson, a healthy Jordan Adams, and a more developed Tony Parker, UCLA has enough talent to compete for a Pac-12 title again. This may seem like a low ranking given what UCLA brings back, but remember UCLA was only 47th in the Pomeroy Rankings last year. I’m predicting they will be better on offense and defense.

Alabama: This might be my most unorthodox Top 25 pick. Anthony Grant teaches outstanding defense, so Alabama will always be competitive in that area. And Bama brings just about everyone back, so expect a more coherent offense from the start of the season. There is no excuse for losing to Mercer or Tulane this season. The model particularly expects Devonta Pollard to take a big step forward. The freshman forward often looked unprepared last year, but he was a Top 25 recruit out of high school, and he should develop into a more polished post player. Plus Alabama adds two more Top 100 forwards to the rotation, which should help as well. My biggest concern is that far too often in recent seasons, Grant’s returning upperclassman haven’t delivered. Last year it was Andrew Steele’s injuries that caused him to fall apart and miss the end of the season. In previous seasons it was off-court issues that derailed the team. But on paper, there is no reason Alabama shouldn’t take a step forward and become an elite team next year.

Pittsburgh: It really helps that Pittsburgh can develop underclassmen to replace its seniors. Tray Woodall is gone, but James Robinson played point guard very well last season, and should keep the team playing at a high level.

New Mexico: The starting five from the MWC champs could have been back if not for the early entry of Tony Snell. But even without Snell or head coach Steve Alford, the experience the other four starters have working together should ensure another strong season. New head coach Craig Neal might not have the most credentials, but all he has to do is make sure the starters don’t transfer, and New Mexico will compete for a MWC championship again.

Kansas: A very good comparison for the 2014 Jayhawks might be the 2013 Tar Heels. I fully expect Bill Self to make Perry Ellis into a high volume scorer next season, just as I thought James McAdoo would become a star last year. And there are some impact recruits like Wayne Selden. But this is still a complete rebuild on offense. Bill Self’s teams always play outstanding defense, and he’ll need that to stay in the Top 25. Kansas could desperately use Andrew Wiggins to commit to the school if they want to win a 10th straight Big 12 title, but it helps that the rest of the conference should be down next year.

Wichita St.: Last year Gregg Marshall returned only 35% of his minutes so with 54% of his minutes returning this year, winning should be a piece of cake. Seriously, if he can build another dominant team with unheralded recruits, he might be the best coach on the planet.

Indiana: The Hoosiers have a lot of good pieces, but the model doesn’t like how they fit together. It concludes based on last year’s substitution patterns that Yogi Ferrell, Jeremy Hollowell, Remy Abell, and Will Sheehey will see plenty of action. And they just aren’t the most effective offensive players. Ideally the younger players will see a lot of playing time early, and some of them will become stars, but it should be a transition year.

Miami: The Hurricanes don’t have enough incoming talent to replace what they lose.

Providence: The model questions whether Ed Cooley is a good enough defensive coach. Personally, based on what Providence did late in the year, I think they probably will have a solid defensive team next season. But getting elite talent to commit to defense isn’t easy. It certainly didn’t happen in January this year. And if Ricardo Ledo goes pro, they aren’t even in the conversation.

VCU: Troy Daniels (and his 124 made three pointers) is gone, and this isn’t a team loaded with elite talent. But the system should keep them in the Top 25 discussion again next year.

Gonzaga: Sam Dower was a solid backup forward, but it is really asking too much for him to replace Kelly Olynyk and Elias Harris. Losing two high volume shooters is going to lower the efficiency of all the returning players.

Oregon: They lose a ton of value with their seniors. They could have really used that Aaron Gordon commitment.

Mississippi: Marshall Henderson is back, but three key starters are gone.

UNLV: Mike Moser may be transferring to Washington, but even if Moser comes back, they lost a lot of production this off-season.

St. John’s: D’Angelo Harrison says he wants to return to the team, and they will be better than people think.

Maryland: Even without Alex Len they will be an upper division ACC team.

Coming in the next three months:

2)      Where the lineup-based model went right and wrong in year one, and how it can be improved.