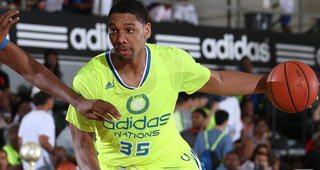 The 2013 adidas Nations is in the books with many of the top prospects from the freshman classes of 2014, 2015 and 2016 appearing. Here are notes on many of the more notable players:

Jahlil Okafor: From start to finish, Jahlil Okafor was the most consistently impressive prospect at adidas Nations and that includes the nearly four-dozen college players. Okafor is incredibly skilled on offense for a 17-year-old center, exhibiting an arsenal of post moves that few big men ever develop.

Okafor has remarkable footwork and quickness out of the post, beating his man at will whenever single-covered. When he is doubled, Okafor shows great poise and sophistication in finding the open man.

Okafor projects as a 20-plus point per game scorer at 55-plus percent from the floor while creating his own offense and adding another 3-4 assists.

Okafor has a great open floor dribble and can also beat his man in the halfcourt in isolation situations. Okafor doesn’t have a ton of confidence in his jumper, strongly preferring to operate with his back to the basket, but his mechanics are sound and should reliably hit from 15-18 feet in time.

Okafor is graceful with the ball and has great agility; he is a basketball player in the purest sense. But he lacks explosion athletically and isn’t particularly long. Okafor doesn’t impact the game in nearly the same way on defense and on the glass as he does on offense. Okafor can become every bit as skilled offensively as Tim Duncan, but his build won’t allow him to be the same type of two-way player.

In terms of character and understanding of the game, Okafor is what you want from a star player. He knows he has been the best player on the floor at all times and expects greatness from himself, but has also been a great teammate and clearly is working to improve.

Okafor is widely expected to commit to Duke along with Tyus Jones and is the early favorite to go first overall in 2015.

Kevon Looney: Similar to how his teammate Okafor dominated on offense, Looney made a comparable impact on defense. Looney will become part of the new wave of big small forward/small-ball power forwards. Looney is incredibly long and even more active on defense. He is a magnet to the ball with how frequently he records deflections, steals and blocks. Looney is the type of player that you throw out on the floor and there is no doubt he will positively influence the game.

On offense, his game is largely scrappy finishes at the rim and put backs, but he can hit the occasional three-pointer.

While Okafor was the best player in the camp, Looney was my personal favorite and the best overall statistically.

Stanley Johnson: The big three of Okafor, Looney and Johnson was excellent throughout the weekend, so great that it is unfortunate we won’t be able to see those three carry it over into the NCAA with Tyus Jones joining to play point guard.

Johnson was one of the best inside/outside wings of the weekend, showing his quick release on perimeter shots and also attacking the rim frequently.

Johnson has a great physical profile to match his skills and a healthy level of swagger.

Justice Winslow: Winslow didn’t make the same type of impact as Okafor, Looney or Johnson for USA 2014 Red, but had a strong showing. His strength is advanced for his age and his play maximizes that advantage on the wing.

JaQuan Lyle: Lyle showed flashes of talent as a combo guard with inside/outside playmaking, but also was the source of as many baffling and plays that frustrated head coach Ralph Sampson as any player during the camp. Lyle played the majority of his minutes with the Okafor/Looney/Johnson/Winslow unit, but there was clearly a reason why Sampson went away from him during crunch time in the championship.

Kaleb Joseph: Joseph was steady as a floor general in his time, knifing through the defense off the dribble. He also had multiple open floor dunks with good length for a smaller player.

Trevon Bluiett: One of the better perimeter shooters of the tournament, Bluiett also showed craftiness off the dribble and in transition. Bluiett is more ordinary on a physical level than many of the other players and hence his general reliance on screens and kick outs for offense.

Myles Turner: Turner has great length and lift on defense, blocking and altering shots all weekend. Turner is a strong finisher with his elevation, but remains limited with his back to the basket to one move at a time.

Turner did an extraordinary job in limiting Okafor in the championship game, disrupting him with his length and activity.

Theo Pinson: Pinson had a lunch pale type of impact throughout the tournament on both sides of the floor, doing all of the necessary little things. Pinson’s workmanlike approach, highly competitive nature and high-end talent is all too rare at this level and an excellent indicator for his future.

Trey Lyles: Lyles has a strong all-around game with good mobility for a wide-bodied big. He has good footwork when setting screens, both when slipping to the bucket or popping for a jumper. Lyles tends to drift toward the perimeter too often, or simply leaking out for transition opportunities instead of putting his size to work in the halfcourt. His touch around the basket could be the best part of his game.

Lyles was unquestionably impressive at times, but those glimpses were more rare than they should have been given his talent level. It is tough to be critical of his motor, but Lyles absolutely needs to be more aggressive.

D’Angelo Russell: A recent Ohio State commit, Russell was USA 2014 Red’s volume scorer. Russell’s second half in the championship game was a perfect example. He is especially gifted creating off the dribble in the mid-range. Like Stanley Johnson, this performance comes off a great Nike Global Challenge.

Reid Travis: Travis is a big-bodied power forward with an advanced post game, a strong jumper and is also a good rebounder. The NBA may not be in his future, but he has the look of a high impact college player and was the highest scoring interior player on 2014 USA Blue.

Nehdi Ngouma: There was no point guard at adidas Nations as consistently impressive as Ngouma of Africa. He is supremely crafty off the dribble with hesitation moves and crossovers that lead to floaters and dish offs all while under control. Ngouma can’t be described as a knockdown shooter, but has a good foundation and hit several three-pointers. In Monday’s third place game, Ngouma finished an electric contested two-hand dunk in transition, showing off his length and explosiveness.

Ngouma has a really good understanding of the game and is a great leader.

Sidy Ndir: There is a little bit of Ngouma in Ndir’s game, though he is more of an off guard and far less efficient. Ndir creates his own offense off the bounce by losing his man to setup the mid-range jumper.

Papa Sadia Diatte: Similar to Looney on a lesser level, Diatte can do a little bit of everything on both sides of the floor and was generally very active. Diatte will score most of his offense in the general flow of the game, but he did create off the bounce on occasion when given space and also hit a few perimeter shots despite an injured left hand.

Stephen Zimmerman: At 7-1 and not yet 17, Zimmerman is extremely fluid with the ball. Zimmerman has a strong lefty jumper and projects as a good off-ball shotblocker. Zimmerman had one of the most buzzed about plays of the camp when he went coast to coast for a breakaway dunk on a defender.

Charles Mathews: Mathews was the best player on his team (2015 Red) whenever on the floor. He has good mechanics on his perimeter shot and impressive body control when attacking. Mathews has good instincts as a rebounder, but tended to remain stationary without ball instead of moving into clear seams in the defense. That’s the type of development that will evolve in time with more experience and an increased comfort level in these settings.

Deron Davis: Davis is the 10th ranked players in the class of 2016 and became increasingly confident each day against physically more developed players, battling well on Sunday against Okafor and Looney. Davis has good lift and also made a few strong passes from the high post.

Jaylen Brown: Brown was largely inconsistent, but he had one of the best dunks on Sunday with a tomahawks in the halfcourt against USA 2014 Red.

Carlton Bragg: It is doubtful anyone else here plays with as much joy as Bragg. Bragg exhibited great explosiveness on several dunks and blocks. He also hit multiple perimeter shots with good form on his jumper. Bragg is ranked No. 13 in 2015 and could reach another level if he grows another inch or two because his game and physique projects as more of a stretch/finesse power forward.