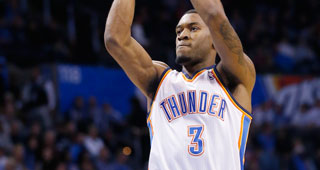 For players drafted outside of the lottery, cracking the rotation as a rookie is an uphill battle. The teams that drafted them have higher expectations and more or less set rotations. If there is an open spot, most coaches would rather go with a veteran than a rookie. They don’t have time to let a young player grow through his mistakes, especially on the defensive end. If they can’t fill a role on the team right away, they aren’t going to play.

Year 2 is where that starts to change. With a full season and offseason under their belt, second-year players are more comfortable with the professional game, on and off the court. Things start to slow down, allowing them to showcase the skills that got them drafted in the first place.

Last year, I had Jimmy Butler, Nikola Vucevic, Tobias Harris, Alec Burks and Jordan Hamilton on my list of breakout second-year players. I think this year’s group could be even better. The 2012 draft was stronger than 2011 due to the number of players who stayed in school an extra year because of the lockout. Here’s five second-year players, none of whom were drafted in the lottery, who I think could make a name for themselves in 2014:

If we’re comparing guys by their high school class, another interesting one is Jones and Tristan Thompson, two athletic 6’9 240+ power forwards from the class of 2010. Thompson declared after one season at Texas while Jones opted to return to Kentucky. The Wildcats went 38-2 and won a national title, but playing with Anthony Davis and Michael Kidd-Gilchrist depressed his stats. Jones would have been a lottery pick in 2011 but slipped to No. 17 in 2012.

Jones has all of Thompson’s physical tools and is a more dynamic player with the ball in his hands. While he didn’t get many minutes as a rookie in Houston, he more than held his own with a 17.6 PER. Jones can put the ball on the floor, finish at the rim, match up with multiple positions and impact the game as a rebounder and shot-blocker. His inconsistent jumper could be a problem in the Rockets system, but if he gets minutes, he will produce.

Taylor will never be a star, but he has the tools for a 10-year career in the NBA. At 6’7 225, he’s a shooter with the size and athleticism to match up with multiple positions. As long as he makes three-pointers (34 percent as a rookie), he will have a place in the league. Unlike most shooters, he also has the ability to attack a close-out and be a secondary option in the offense. As a senior at Vanderbilt, Taylor averaged 16 points a game on 49 percent shooting.

He had a strong offseason, playing well as the lead option for the Bobcats summer league team and the Swedish national team at EuroBasket. The international experience, in particular, could be very helpful, allowing him to work on his game and improve his confidence against high-level competition. The presence of Al Jefferson should make a difference as well, since Charlotte had no one last season who could demand a double team in the post.

Like many young shooting guards, Barton is prone to bursts of wildness and occasional delusions of grandeur. Nevertheless, he has far more talent than a typical second-round pick and he could end up playing a big role for Portland this season. At 6’6 175 with a 6’10 wingspan, he has an intriguing combination of length and quickness. As a sophomore at Memphis, he averaged 18 points, 8 rebounds and 3 assists a game on 51 percent shooting.

The Trail Blazers have a roster full of shooters, but not many guys who can get into the lane. With the ball in his hands, Barton is a dynamic player who can make plays off the dribble, finish at the rim and find the open man. The injury to CJ McCollum opens up some possible playing time for Barton as a second-unit shooting guard. If he can play enough defense to stay on the floor, his slashing ability could be a nice complement to Damian Lillard and Mo Williams.

If you go strictly by the eye test, you would think Jones was a lottery pick. In general, 6’11 235 players just aren’t supposed to move as well as he does. He’s every bit the athlete that Kevin Durant and Serge Ibaka are; he has the length and quickness to slide between all three frontcourt positions in the NBA. After biding his time in the D-League as a rookie, there is room for him to carve out a role behind Durant as a backup small forward this season.

Coming out of Baylor, the big knock on Jones was his passivity on the offensive end. However, in a more limited role in the NBA, his ability to shoot from the perimeter and finish on the pick-and-roll will make him a valuable weapon. On the defensive end, the sheer amount of length the Thunder can put on the floor with the combination of Ibaka, Durant and Jones is intriguing. Like most young big men, the key with Jones will be patience.

As someone who covered the 2011 Baylor team for SB Nation Dallas, I have a soft spot for Jones and Miller. Those guys were just not put in a position to succeed by Scott Drew, who really should have apologized for costing them so much money. Miller, like Jones, has a ton of talent. He’s a 6’9 210 forward with a 7’1 wingspan and the ball-handling and shooting ability of a guard. Miller is still only 20 years old; he would be  a junior in college this season.

He didn’t play much as a rookie, but he could benefit from a regime change in Denver. Over the summer, Brian Shaw compared him to Paul George, whom he coached as an assistant in Indiana. That is ambitious, but I don’t think it’s insane either. Before tearing his ACL as a senior, Miller was considered one of the top 2-3 players in his class. If the Nuggets struggle, Shaw will probably turn to him at some point, just to see if he can provide a spark.