Keeping Lance Stephenson Will Be Expensive Problem For Pacers 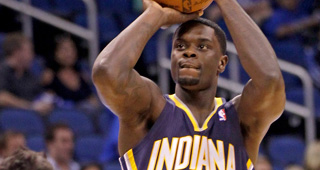 There’s more than enough credit to go around for the rise of the Indiana Pacers, who went from the mediocrity treadmill to title contention in four years. Two months into the season, Paul George is in the MVP discussion and Roy Hibbert is the front-runner for Defensive Player of the Year. Just as important has been the development of Lance Stephenson, who leads their starting five in field goal percentage (48 percent) and assists (5.0).

At 6’5, 230 with a 6’10 wingspan, Stephenson is one of the most difficult covers at the shooting guard position in the NBA. In a league moving from power to speed, there are very few guards with the physical strength to bother him. He has broad shoulders, long arms and a powerful frame -- a basketball player with the body of an outside linebacker. That’s how a guard without an elite vertical can have an effective field goal percentage of 66 percent in the paint.

Coming out of college, no one questioned Stephenson’s physical ability. The concerns were about his maturity and approach to the game, which is why he fell to the 40th overall pick in 2010. In his one season at Cincinnati, he dominated the ball on average team, with meager shooting percentages of 44 percent from the field and 22 percent from three. A 19-year-old rookie with an non-guaranteed contract, there was no guarantee he would stick at the next level.

His play this season is the culmination of a four-year process. Before Stephenson even played an NBA game, he was arrested for allegedly pushing his girlfriend down a flight of stairs. While the charges were eventually dismissed, the Pacers might have released him if it happened a few years before, when they were still operating in the shadow of the “Malice in the Palace”. By the end of his rookie season, they benched him due to maturity issues.

In his second season, Stephenson made headlines for the wrong reasons again, when he made a choking gesture at LeBron James in the final moments of a playoff game. Were it not for older people in the organization like Larry Bird taking him under their wing, he could have ended up another cautionary tale, an AAU star given too much too fast. Soon after he was drafted, Bird called Stephenson the most talented player on their roster.

On the court, an inconsistent jumper was the main thing holding him back. In his first two NBA seasons, Stephenson went 4-for-35 from beyond the arc. Since he spent so much time playing off the ball in Indiana, a broken jumper put a ceiling on his game. He made a huge jump before his third season, shooting 33 percent from three in 2.4 attempts a game. This season, he’s become a legitimate threat from deep, shooting 36 percent on 2.9 attempts a game.

As a result, Stephenson is a complete player without any holes in his game. He could always beat his man off the dribble and get to the rim; being able to punish defenders when they play off him has made him nearly indefensible 1-on-1. If teams send help, Stephenson has the passing ability and vision to find the open man. He impacts every dimension of the game -- he cleans the boards (6.6 rebounds) and defends all three perimeter positions.

Just as important, from the Pacers perspective, is his ability to fit into a role. They are built to play inside-out; their guards have to control tempo and dump the ball inside to Hibbert and David West. When the starters are in the game, there isn’t too much room for Stephenson to freelance, especially in the half-court. Maybe the most remarkable part of his transformation is how under control he plays -- he has a 2:1 assist-to-turnover ratio this season.

Because Stephenson spends so much time playing with George, Hibbert and West, his improvement is hard to see in his per-game statistics. He has a usage rating of 18.5 usage, only fifth highest on the Pacers. Every once in awhile, though, he will put together an all-around game that will make you shake your head -- 23/7/6 against the Detroit Pistons, 10/11/10 against the Boston Celtics, 13/11/12 against the Memphis Grizzlies.

Stephenson doesn’t get to showcase his game until the second unit comes in. He’s essentially the backup point guard behind George Hill, running the offense and getting the reserves involved in the game. While CJ Watson and Luis Scola have improved their bench, the biggest difference has been Stephenson’s bigger role. He plays 35 minutes a game; he’s a role-playing starter and a 6th man in one. It’s what James Harden should have been doing in Oklahoma City.

That’s not the only similarity between Stephenson and Harden. Indiana is moving towards the same crossroads Oklahoma City faced in 2012. After re-signing George and West, the Pacers already have $65 million committed for 14-15. And that’s with Danny Granger’s $14 million salary coming off the books. The Thunder traded Harden rather than pay the luxury tax. For a small-market franchise, there’s no easy answer.

This summer, Stephenson will be worth more to a franchise without established stars, one who can make him the primary option on the first team. That may sound crazy for a guy who averages only 13 points, but there’s only so much he can do taking 11 field goals a game. Harden had 10 field goal attempts a game in 2012; Eric Bledsoe was at 7.5 last season. Was either “ready” for a bigger role on a new team? Only one way to find out.

When you evaluate under-25 players, skill-set is more important than statistics. And when you look at Stephenson’s game in total, it’s scary how good he could be. Still only 23, he’s already a better shooter than Dwyane Wade, a better defender than Harden and a better passer than George. If he could dominate the ball in an uptempo system that spread the floor and let him play in space, like Bledsoe does in Phoenix, he might put up serious numbers.

Since Stephenson wasn’t a first-round pick, he will be an unrestricted free agent this summer. In comparison to a guy in his 30’s, there’s very little downside to signing a 23-year old UFA. Younger guys become more mature; older guys just get worse and more injury-prone. If I were the Pacers, I would do whatever I had to do to keep him, George and Hibbert together for the next decade. Lance Stephenson may not have been “Born Ready”, but he’s ready now.