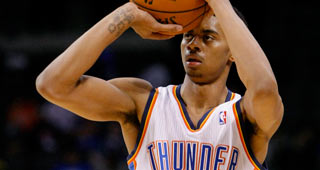 The Oklahoma City Thunder came out swinging in Game 3 of the Western Conference Finals, looking nothing like the team that was blown out by the San Antonio Spurs in the first two games. With Serge Ibaka back and Reggie Jackson taking Thabo Sefolosha's place in the starting line-up, the Thunder were a much better team on both ends of the floor. Almost as important was the stretch when Derek Fisher was out getting stitches, putting Jeremy Lamb in the game.

The Thunder took control of the game in the second quarter, when Lamb and Reggie Jackson were playing with the Oklahoma City stars. Manu Ginobili's one-man explosion somewhat obscured how well that group played, but the presence of Lamb and Jackson gave the Thunder a combination of length, skill and athleticism that San Antonio didn't have an answer for. The Spurs' ball movement was shut down and they turned it over 5 times in the quarter.

Lamb has a 6'11 wingspan and Jackson has a 7'0 wingspan, so when you combine those two with the length of the Thunder stars, there just aren't many open spaces. On offense, Lamb is a far more dangerous player than either Derek Fisher or Thabo Sefolosha, the two veterans Scott Brooks has stuck with for most of the playoffs. Lamb had six points on 3-5 shooting and his ability to shoot and put the ball on the floor as the fifth option stretched the defense to the breaking point.

Brooks decision to bench Lamb towards the end of the season was one of the more perplexing moves even amongst his long history of questionable rotation decisions. It wasn't production, as Lamb had better numbers than either Fisher or Sefolosha this season - Lamb had a 13.4 PER while Sefolosha was at 10.4 and Fisher was at 10.1. If Brooks was determined to get Caron Butler on the floor, there were more obvious places in the rotation to open up minutes.

Instead of going with the players who earned the right to be on the floor, Brooks went with veterans who had more playoff experience. It was a small decision at the time, but it's loomed larger as the playoffs have gone on and Ibaka’s injury shined a spotlight on the back end of the Thunder rotation. Fisher, in particular, just isn't as effective a player as Lamb on either side of the ball, which even a cursory glance at the statistics can tell you. The NBA should be a meritocracy.

With so much elite talent in Oklahoma City, Brooks is usually able to get away with not maximizing the talent on his roster. Plenty of guys can look good playing off of Durant, Westbrook and Ibaka and Fisher even had a few good stretches in the last few months. He's a 6'1 shooting guard whose only job is to stand in the corner and hoist up 3's, so every once in a while he's able to have a big game. Nevertheless, the guy is shooting 29% in the playoffs for a reason.

A lot is made in every telecast about how Fisher is breaking the NBA record for career playoff games in these playoffs. And while it's impressive that a man his age is able to stay in good enough shape to compete, it's worth pondering the flip side of that record. That means no other coach in the history of the NBA playoffs has ever felt the need to play a 40-year old shooting guard, probably because there's no way they can consistently impact a game at that age.

All you have to do is look to the other sideline and the way that Gregg Popovich manages the minutes of the Spurs. Tim Duncan, Tony Parker and Manu Ginobili are all getting up there, but San Antonio isn't that old because Popovich keeps a lot of young players in their supporting cast. He's not afraid to bench his veterans for younger players - see Aron Baynes over Matt Bonner in this year's playoffs and Kawhi Leonard over Stephen Jackson in 2012.

While Bonner is one of the longest tenured players on the San Antonio roster, Pop is willing to make the cold-blooded decision to play his best guys because he knows that's the way he's going to win. He could probably have figured out a way to juggle his rotation to keep Bonner and Jackson on the floor in the last few years, in much the same way that Brooks has found ways to play Sefolosha, Fisher, Butler and Kendrick Perkins, no matter the situation.

Pop kicked Jackson off the team precisely because he wasn't willing to accept playing behind Leonard. This is a guy who won a championship with the Spurs and who scored 23 points in Game 6 of the 2012 Western Conference Finals. Nevertheless, Pop was willing to have a tough conversation with a veteran he was close to personally. Brooks, in contrast, eventually benched Sefolosha against the Memphis Grizzlies, but then went right back to him later in the playoffs.

When you look at it with clear eyes, there's no way to justify Fisher getting minutes over Lamb. You can talk about playoff experience and championship intangibles and magic leadership beans, but Lamb is a better shooter, he's longer, more athletic and more capable of impacting a game on both ends of the floor. That's not a huge deal because they are the 3rd or 4rth guards in the rotation, but these minor adjustments are what make the difference in a seven-game series.

In and of itself, playing Lamb or Fisher probably won't decide the Western Conference Finals, not with so many other factors at play. However, it's the canary in the coal mine for whether Brooks is willing to put his emotions away and make decisions that put his team in the best position to win. It's process over results and it's going to be hard for Oklahoma City to win two more playoff series if their coach continually uses bad process to make rotation decisions.