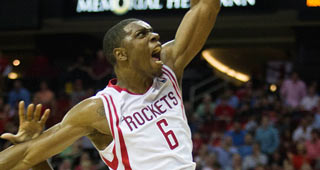 Things didn't exactly go according to the plan for the Houston Rockets this offseason. In the span of a weekend, they went from having Chris Bosh and Chandler Parsons to neither, all while clearing out their bench. After a disappointing first round exit, the Rockets lost Parsons, Omer Asik and Jeremy Lin and have only Trevor Ariza to show for it. With Daryl Morey's hot streak the last few offseasons coming to an abrupt halt, the Rockets seem like a prime candidate to regress.

Losing Parsons is a blow not only to their chances next season, but to the odds of getting a third star like Kevin Love. The mechanics of trading his contract would have been difficult, but he's exactly the type of young piece a team like the Wolves would want in a trade. Without Parsons, the Rockets don't have much room for internal improvement left on their roster. They have only one young player they can dream on - Terrence Jones. The good news for them is that he can really play.

Jones has slipped under the radar ever since his sophomore season at Kentucky, when he took a backseat to Anthony Davis and Michael Kidd-Gilchrist on a team that won a national title. With his stats depressed in a smaller role, he fell to the Rockets at No. 17 in 2012, the last in a long line of young PF's they drafted in the first round. After barely playing as a rookie, he carved out a spot for himself in the starting line-up as a second-year player, averaging 12 points and 7 rebounds a game on 54% shooting.

Those numbers hardly forecast future stardom, but they were excellent when you consider the role that he had on the team. Jones was the fourth or fifth option on the floor, playing behind Dwight Howard, James Harden and Parsons. As a result, he rarely got to play with the ball in his hands - most of his points came from cutting off the ball, crashing the offensive glass and running the floor. If Parsons had stayed, Jones would never have had the chance to be anything more than a role player in Houston.

If Morey had signed Bosh and pulled off a Big Four, Jones would have been fighting for minutes on the second team, if not shipped away in order to clear salary cap space. Instead, without either Parsons or Lin, there's a huge role in the Rockets offense that will need to be filled. Those two averaged almost 24 field goal attempts a game and Ariza only averaged 11 in Washington last season. Jones, who averaged 9 a game last season, is a logical option to soak up more possessions.

At 6'9 250 with a 35' max vertical, Jones has the physical measurements and athleticism of a lottery pick. If he had come out after his freshman season of college, he likely would have been taken in the Top 5, which would have dramatically altered the perception of him around the league. His numbers as a freshman weren't much different from those of Julius Randle. Jones has elite ball-handling ability for a player his size, a quick first step and the ability to finish at the rim or find the open man off the dribble.

Jones is more of a combo 4 than a stretch 4, so he's not a natural fit with a center like Howard who wants the ball on the block. At the same time, the two form one of the longest and most athletic frontcourt duos in the NBA and they are more than skilled enough to figure things out on the offensive side of the floor. There should be plenty of opportunities for Jones to push the ball in transition as well as attack the lane with the other three perimeter players spotting up on the three-point line.

As is the case with most young players, Jones has a lot of room to grow on the defensive side of the ball. That was made clear in the playoffs, when LaMarcus Aldridge tore him up in their first two games, averaging over 40 per night. Jones isn't quite as long as Aldridge, but he still has a 7'2 wingspan, so he's more than capable of holding his own at the PF position. Along with Howard, he gives the Rockets two big men capable of defending the two-man game, a huge advantage in a spread pick-and-roll league.

Just as important as any maturation on defense, Jones should have the opportunity to attack guys like Aldridge on the other end of the floor next season. That's one of the best ways to go at a big-time scorer - attack his legs and make him work on defense. With Jones hardly ever being featured in the Rockets offense, Aldridge didn't have to work all that hard against him. People tend to confuse opportunity with talent, especially with young players. There's only so much a guy can do with a usage rating of 18.

If Jones can handle a role as a third option and a featured player on the second unit with a usage rating of 22-23, there is a scenario where the Rockets end up improving without Parsons. With Ariza giving them a second lockdown defender on the perimeter, they would have four elite athletes around James Harden, all on the right side of 30. The bench is an issue, but one of the strengths of Houston's front office has been their ability to unearth NBA-caliber players from all types of unlikely places

For all the hubbub around Morey's philosophy and approach to roster building, few can doubt his eye for talent. While it looks like he outsmarted himself this summer, his ability to find guys like Patrick Beverley in Europe and Terrence Jones in the end of the first round has left him with room to maneuver. That could end up being the great irony of the Rockets seemingly fruitless search for a third star - they've been frantically looking under every rock when that player has been on hand the whole time.