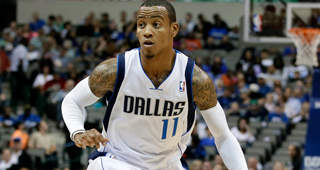 No player benefitted from a change of scenery last season more than Monta Ellis. After seeing his career spiral downward in an ill-fated stint with the Milwaukee Bucks, Monta found a new home with the Dallas Mavericks, where he was surrounded by three-point shooting and installed in a system that suited his talents. He averaged 19 points and 6 assists per game on 45% shooting and was one of the main catalysts for the Mavs return to the playoffs after a one-year hiatus.

Monta went from laughingstock to cornerstone, the latest in a long line of guards to benefit from playing next to Dirk Nowitzki. His slashing ability was the perfect complement to Dirk's ability to stretch the floor and their two-man game became one of the most indefensible combinations in the league. However, for as well as he played, the holes in his game that haunted him in Golden State and Milwaukee are still there and it's unclear how he fits long-term in Dallas.

Last season was only the third time in Monta's nine-year career he made the playoffs and that's not entirely a coincidence, as he has a unique combination of strengths and weaknesses that make it difficult to build an elite team around him. Very few players can successfully share a backcourt with him - he didn't fit next to Steph Curry, Brandon Jennings or Jose Calderon. A team with Monta as a primary option has to pound a lot of square pegs into round holes.

At 6'3 185 with a 6'3 wingspan, he's a SG with the size of a PG. While he is a much better passer than he's often given credit for, he's an inconsistent decision-maker who needs to be paired with another ball-handler who can initiate the offense and control the tempo of the game. Monta is a SG who can't shoot 3's or play defense, which puts a tremendous amount of pressure on both sides of the ball for the other starting guard, regardless of which position they play.

Since Monta can't stretch the floor, he can't play with another guard who needs the ball in his hands and since he can't defend his position, he can't play with another minus defender. Monta's ideal backcourt partner should be able to defend both backcourt positions and shoot the ball at a high level while still being able to handle and take care of the ball like a PG. Here's the problem - if you look around the NBA, there are not many guards with that skill-set.

As a rule, the type of guard that makes sense next to Monta on offense doesn't make sense next to him on defense. Calderon is a perfect example - at 6'3 210, he's a big PG who is one of the best shooters (45% from 3) and decision-makers (4.7 assists on 1.3 turnovers) in the NBA. Not only was he an elite floor spacer in Dallas, which opened up a ton of driving lanes, he rarely turned the ball over, which created a ton of possessions for Monta to do his thing.

The problem came on the other side of the ball, as a starting backcourt of Calderon and Monta was bleeding points defensively. When you add a 35-year-old Dirk to the mix, you had a starting unit regularly directing conga lanes to the front of the rim. As a result, Shawn Marion, the Mavs' small forward, was forced to defend four different positions, far too much to ask of a 34-year-old. When you have to cover for Calderon, Monta and Dirk, you don't get many nights off.

As versatile as Marion was on defense, his offensive game started to decline in his 15th season in the NBA, so the Mavs decided to upgrade the SF position this offseason with the signing of Chandler Parsons. And while Parsons is a decent defender, he's not capable of locking down an opposing team's PG or SG. That's the problem with building a team around multiple players with holes in their game - it's hard to create a line-up that works on both sides of the ball.

Parsons isn't the only new starter on the perimeter next season, as the Mavs brought in Jameer Nelson to replace Calderon at PG. Nelson is a good shooter and passer and is a much better defensive player than Calderon, but he's an undersized PG (6’0 190) in his 30’s. He will have to guard the opposing team's PG, which means that with Marion gone, Monta will spend a lot of nights guarding guys like Kobe Bryant, James Harden, Klay Thompson and Goran Dragic.

In order to combat those defensive issues, Dallas will likely close games with Devin Harris, their best defensive guard, running point. That, however, opens up a whole different can of worms, as Harris shot only 31% from three last season and a back-court of Monta and Harris will struggle to space the floor for Dirk and Parsons. Rick Carlisle is a great coach, but there's only so much he can do - if he plugs a hole on offense, it opens one up on defense and vice versa.

Going forward, the big question in Dallas is how to best maximize Dirk's remaining years in the NBA. As great a combination as him and Monta are, you don't pay a guy like Parsons $15 million a season in order for him to be third option. And if Parsons and Dirk are going to be your top two options, you want as much defense and three-point shooting next to them as possible. So while the Mavs improved this offseason, but there's still a ceiling on their roster.

Dallas is committed to Parsons and Dirk for the next three years, but Monta has a player option in his contract and could hit free agency next summer. At 29, he would be looking for one last long-term deal, which would lock the Mavs into a core with a number of defensive issues. From there, it's hard to see the guard who makes Monta-Parsons-Dirk work. That's what it comes down too when trying to build an elite team - what a guy can't do is as important as what he can.