Zags Could Finally Be Sweeter Than Sweet 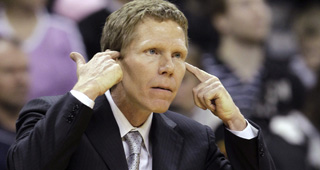 Mark Few has built a mid-major powerhouse at Gonzaga since taking over the head coaching role back in 1999. The Bulldogs have qualified for every NCAA Tournament with Few at the helm, but have faced scrutiny over the past few years due to the inability to advance past the Sweet 16. While it’s early in the season, Few’s squad looks poised to break the trend and push for a deep postseason run.

Gonzaga has started the year 3-0 with wins over Sacramento State, SMU, and Saint Joseph’s. None of the contests have been even remotely close, as the Zags topped their opponents by an average of 38 points per game. SMU is the only ranked opponent Gonzaga has seen, but the Bulldogs dominated from start to finish in a 72-56 win.

For the Zags, it all starts with the play in the backcourt. Seniors Kevin Pangos and Gary Bell Jr. are experienced leaders that can shoot the lights out. Pangos had a big day with 17 points, seven assists, five rebounds, and three steals against SMU. He was 6-of-11 from the field and nailed 5-of-8 attempts from three-point range.

On Wednesday against St. Joseph’s, it was Bell Jr.’s turn to ignite the scoring column. He posted 18 points on 6-of-8 shooting including a blistering 5-of-7 display from behind the arc.

“I love coaching him,” Few said of Bell Jr. after the game. “I wish I could be coach him for the rest of my life. He’s just an absolute joy. He’s absolutely the most consistent guy as far as effort and mood.”

The sweet-shooting backcourt will provide plenty of spacing throughout the season. Pangos is averaging 13.0 points and 5.3 assists per game while shooting 68.1% from the field and 58.3% from three-point range. Bell Jr. has made at least two three-pointers in every game this year and is shooting 47.8% from the field and 47.4% from deep. He’s also performed well on the defensive end. The duo may be the best shooting backcourt in the country and will give opponents fits all year long. They may lack ideal size, as both are listed at 6-foot-2, but there’s no doubting their overall impact on the game.

On the wing, USC transfer Byron Wesley is the perfect compliment to Pangos and Bell Jr. The 6-foot-5 senior averaged 17.8 points per game at USC last year and provides a slashing skill set. He isn’t a major shooting threat, as he’s 0-of-3 from deep this season, but has still averaged 9.3 points per game on 44.4% shooting. In addition, he’s contributed 5.7 rebounds, 4.7 assists, and 2.3 steals per game early on. Wesley made the move to Spokane to join a winning program and it’s evident early on that he’ll make any contributions necessary to make his final collegiate season a success. He impacts the game on both ends of the floor and will be another vital piece.

In addition to Wesley, Few has another transfer making an impact. Former SEC Sixth Man of the Year Kyle Wiltjer spent his first two seasons at Kentucky, but decided to make the move to Gonzaga and sat out last year due to NCAA transfer rules. He’s a sweet-shooting 6-foot-10 forward that provides a mismatch offensively. Wiltjer is averaging 11.7 points per game this season while shooting 5-of-11 from three-point range.

“I think I’m a good passer and I shoot the ball well, so I think I can just play off that,” Wiltjer said after the Sacramento State win. “If I can continue to get better down in the post, I think it will be tougher for teams to guard with the more things I do.”

Wiltjer may not bring a physical defensive presence down low, but his ability to spread the floor adds another dynamic weapon to Few’s offensive attack. With so much shooting available, teams will have a tough time helping off any particular defender.

Down low, 7-foot-1 junior Przemek Karnowski brings the interior presence. At 288 pounds, he gets good positioning in the post and can score with hook shots or mid-range jumpers. Karnowski started every game for the Bulldogs last season and adds even more experience to the starting lineup. He’s averaging 8.7 points and 6.0 rebounds per game this year. While he isn’t the most athletic big man you’ll find, Karnowski is a savvy player in the post.

Off the bench, the Zags have a pair of talented freshmen already showing promise. Lithuanian power forward Domantas Sabonis, the son of Hall of Famer Arvydas Sabonis, adds toughness and rebounding down low. He’s scored in double figures in all three games thus far and has shown the ability to create his own offense on the block. Sabonis oozes with upside since he is so athletic and beats his man down the floor consistently. He’s averaging 12.3 points and 9.3 rebounds per game already while shooting 66.7% from the floor. Sabonis is a nice complementary piece off the bench, as he is a better rebounder than Wiltjer and Karnowski. He’ll see plenty of action this season since he can play either position up front.

Fellow freshman Josh Perkins will also play a critical role in the rotation as a 6-foot-3 guard that can play either spot in the backcourt. He’s a good ball handler that sees the floor well but his size will also allow him to play off the ball. Perkins has added 8.3 points and 3.3 assists off the bench and has a bright future ahead.

Senior Angel Nunez, a 6-foot-8 forward that previously played at Louisville, and junior Kyle Dranginis, a versatile 6-foot-5 guard, will also see minutes. They’ll be good glue pieces off the bench. Gonzaga will add even more firepower when former Vanderbilt guard Eric McClellan becomes eligible. He averaged 14.3 points per game for the Commodores before he was dismissed due to a violation of university policy. He’ll become eligible in December and will give add another scoring option in the backcourt.

Gonzaga has so much talent on the offensive end that opposing coaches will have a nightmare game planning against them. If opponents take away the outside shooting, Sabonis and Karnowski are talented post players that can feast inside while Wiltjer is improving in that area. Doubling the post will open up the shooting for Pangos and Bell Jr. Even with an off shooting night, Wesley can put the ball on the floor and attack. There’s so much variety that shutting down one particular player will not get the job done.

“We’ve been continuing to share the ball on the offensive end and find the guy that has the right matchup or where we can get the best shot,” Few said on Wednesday. “That’s a good recipe.”

Defensively, the Zags have been just as impressive. They limited St. Joseph’s to just 10 first half points on 3-of-28 shooting. While they don’t switch on many defensive possessions, the Bulldogs rotate well and help when necessary.

“I loved how we came out especially on the defensive end and we sustained it pretty much for that whole half,” said Few. “It had to be one of the better – if not best – defensive halves we’ve ever played. I thought we challenged pretty much every shot they took in the half and they came in as a pretty good rebounding team. We did a nice job choking that off.”

Gonzaga will have a heavyweight matchup with Arizona on December 6th that should give a better indication of where the Bulldogs stand. With a West Coast Conference schedule in store, this game could be a crucial piece to the seeding puzzle in March.

While a Sweet 16 appearance is a major accomplishment in itself, critics will undoubtedly question if the Zags can break through and finally make that push to the next level. With the way the Zags have played early on, they don’t only look ready to take a small step forward, but possibly make a giant leap into the national title hunt.