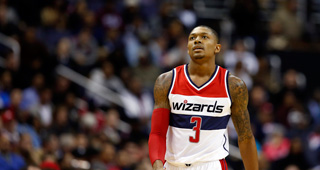 For Bradley Beal, the progression of his talent and skill only needed to balance a properly structured upbringing. His parents and brothers had carefully sculpted a maturity beyond his years, reminding him of the people whom he’d require in life’s quest for intellect. From the moment Beal entered the lives of the Washington Wizards, everyone knew this was a neatly constructed person, a grown man relishing the challenge to conquer his tasks with an inner peace on who he is.

“Listen to your elders,” Beal’s parents and older brothers would tell him. So, he has, whether it is a former assistant in Sam Cassell as a rookie up until last season, veteran players who come and go and, sometimes begrudgingly, the honest and unyielding voice of Randy Wittman.

“You can learn a lot from all the coaches and the vets, so I’m all ears,” Beal says. “When you have a guy in Sam who’s scored 15,000 plus points in his career and who had a successful career, you have to listen to him. He’s won championships before, he’s a coach now, and a great mentor. I even watched him a little bit growing up.

“My family’s always instilled that in me, listening to elders. I’m really family-oriented. Watching my older brothers growing up and everything they’ve been through, all the adversity we’ve been through, that always humbled me. Humbled me, motivated me, to be the best that I can be.”

Beal’s best had been recognized as one of the NBA’s best young shooting guards, and now his best is one of the top at the position outright. While Wall came in the league onto a misfit cast of players, using experience and grueling offseasons on his craft to discover his space, Beal had the luxury of a sureness to him and a more refined roster. So many transactions on and off the court, so many lessons only the league’s competition provides, but Beal’s personality has forever been to stay honest to the grind of the sport, try to obliterate opponents and let that sink in with them.

And nothing has changed.

Beal swears the only business on his mind is the work, the day-to-day improvement, and work has been good. Beal and John Wall join Stephen Curry and Klay Thompson as the NBA’s best backcourts across the country’s coasts. As league executives believe in Beal’s ability to command a maximum salary extension, the Wizards have made clear around the NBA that they’ll do whatever necessary to secure Beal’s long-term deal, sources told RealGM.

So, yes, Beal heard of Thompson’s maximum-level extension with the Golden State Warriors before the season, but he simply shrugs his shoulders. Nothing changed here, Beal promises.

“Money never will change who I am,” Beal told RealGM. “I kind of distance myself from the business part because when you get too caught up in money, it takes your mind off why you really play the game. I play for the love of it. I’m not going to think about contracts or any of that. If that [max] contract is what it is, then it is what it is. But it’s not going to change who I am. Money never will.

“Now, I definitely want to be an All-Star. Who doesn’t? But I don’t set too many crazy, extravagant goals for myself, and the ones that I do, I hold them close to my heart and make sure I focus and lock in.

“We have a solid core here. It’s going to be important for us to keep this core together moving on down the next couple years, because we have something special here. We got a taste of the playoffs, and now we have bigger hopes in mind. Our aspirations are bigger now.”

Beal has played as the sixth man in three games back from a fractured left hand, but his wind and performance stamina have returned and reclaiming his spot in the starting lineup is near. Even as his floor game and passing vision improve, Beal wants more out of himself.

As a team, these Wizards remember hastened shots in the second round series loss against the Indiana Pacers and spent the summer and training camp drilled about the value of each possession, about draining the energy of the defense for quality shots.

“Our ultimate goal is taking care of the ball and moving the ball,” Beal says. “Whenever we move the ball, we usually get whatever we want. Some defenses don’t like to play for 24 seconds. We’re going to do whatever it takes to wear defenses down. We have to continue moving the ball. The least we can do is get a shot up.”

Around Beal, 21, veterans are passionate in the process of a regular season. The 35-year-old Rasual Butler has persevered and produced for an NBA role again. Down the roster, Glen Rice Jr.’s role has been marginal, but the Wizards’ front office has no plan to move the 23-year-old and believes in his ability to produce when given increased minutes. Some of the vets will go through the normal adjustments and trials -- the pain of injury here and there -- but Paul Pierce has been unafraid to become animated in the faces of Wall and Beal while the season is still young.

Pierce will hit critical shots for the Wizards this season, and he’ll strut to the bench and remind everyone his stature.

“They don’t call him, ‘The Truth’ for no reason,” Wall said.

“Paul can adjust to our team on the fly, like that,” Beal said, snapping his fingers.

“This group, this season, is mature,” Wittman said, “and Paul has been a leader throughout his career.”

Washington is one of four teams with a legitimate chance to land out of the Eastern Conference and into the NBA Finals, and that is on Beal’s mind. So much jostling for money in the league, and Beal has shown everyone he doesn’t bask in the sentiments of a contract as much as he basks in its allowance to take care of family, its ability to work and ball. From trying times to a contending team, Bradley Beal has been the perfect co-star for John Wall and these Wizards, fresh of talent and his own sense of self.