The Magic Of Four-Out Basketball 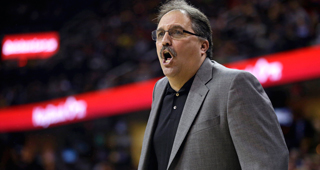 Over the last two weeks, the Dallas Mavericks have been one of the hottest teams in the NBA, reeling off a 6-0 record after they figured out how to integrate Rajon Rondo into their rotation. Dallas beat Washington by 27, Boston by 19 and Cleveland by 19. None of that mattered on Wednesday, when they had to reap the whirlwind in the form of the Detroit Pistons, who have been playing absolutely out of their minds since releasing Josh Smith. Despite being on the second night of a back-to-back, the Pistons dominated from the tip, winning 108-95 in a game they never trailed in.

In their first seven games without Smith, Detroit has been one of the best teams in the NBA.

The numbers jump off the page:

“It’s night and day,” said Chandler Parsons when asked to compare this version of the Pistons to the team the Mavs had beaten the month before. “It’s all confidence. They obviously always had the talent, same coach, same plays, same system. They’re playing free and they’re playing confident right now.”

The mistake in looking at this situation is to make it a referendum on Josh Smith’s career. What is happening in Detroit is a lot bigger than Josh Smith. This is the triumph of four-out basketball in action, a team being radically transformed from one of the worst teams in the NBA to one of the best merely by doing a better job of spacing the floor. By releasing Smith and making a few tweaks to their rotation, the Pistons went from 1-2 three-point shooters to 3-4 three-point shooters on the floor for most of the game. When guys are allowed to play in space, the game becomes really easy.

Think of the rim as the downtown of a major city, with four different highways going right through it. The modern NBA is full of these magnificent sports cars that can zoom 100 MPH at the basket. When you have guards like that, you don’t want some big 18-wheeler sitting in the middle of one of the lanes, blocking traffic. That truck needs to get out of the way so the sports car can streak past. Most importantly, he has to take his man with him, so there’s a free lane to the rim.

The problem with Smith is that even if he went on the perimeter, the defense wasn’t going to respect his shot. As a result, the ball naturally wound up in his hands for the majority of the time he was on the floor. What was a problem at PF was a catastrophe at SF. With Smith and Monroe on the floor, the opposing team could keep three defenders in the lane. In a sense, the extra big men were “clogging up the basepaths”, preventing faster players from getting easier chances to score.

The same thing happened with Smith in Detroit that happened to David Lee in Golden State. With Green spreading the floor from the PF position, the Warriors have one Goliath in the middle and a host of shooters and playmakers on the perimeter who are given the luxury of playing in max space. Steph Curry and Klay Thompson are putting up the best numbers of his career this season for the same reason that Brandon “Young Money” Jennings, DJ Augustin and Jodie Meeks have been in the last two weeks.

It’s like all these guys are playing in Coors Field - if every stadium in the league was Coors Field. When Augustin played in a two-post system in Indiana and Detroit, he looked ready to slip out of the NBA. Playing in this four-out system, he’s a completely different player. When you can get that type of production from guys like Augustin by changing your offensive alignment, it’s going to be increasingly difficult for any team to justify using any other alignment.

In theory, the Pistons could play like the Memphis Grizzlies, who control tempo, pound the ball inside and play lock-down defense with Marc Gasol and Zach Randolph. However, when you have young players, you want to make their lives as easy as possible and the easiest way to do that is to minimize the number of decisions they have to make. Z-Bo and Gasol have the skill and polish to make things work in very tight spaces. That isn’t exactly the strength of Drummond’s game.

Detroit plays real simple basketball. They have either Andre Drummond (6’11 280 with a 7’5 wingspan) or Greg “Moose” Monroe (6’11 250 with a 7’2 wingspan) on the floor the entire game and they put 4 three-point shooters around them.

“I feel like they play with just one big man,” said Dirk Nowitzki. “They start with two bigs then they spread the floor like Stan [Van Gundy] used to do in Orlando when they had Dwight rolling down the middle and spread the floor with Ryan Anderson. Now they’re doing much of the same with Drummond and Monroe as the big setting the screen and the other guys are just ready to shoot out there. It’s a tough line-up to guard.”

All that success on offense, in turn, is having a tremendous impact on the defensive side of the ball.

“We have gotten better on both ends of the floor,” Stan Van Gundy said. “Everybody we put in contributes. When the ball goes in, it helps. It gets your energy up and you defend a lot better.”

It’s amazing what happens to team chemistry when they start winning every night. All of a sudden, guys become a lot more willing to make the extra rotation, sell out on defense and play for the team instead of themselves. The Pistons are playing the game like a college team right now, with almost boundless enthusiasm and very little concern about their own individual numbers. Nothing like that lasts forever, but it was sure fun to watch in person on Wednesday.

“One of the things I really liked [about the win in Dallas] is we finished with almost an entirely different group than we finished with last night [the win in San Antonio],” Van Gundy said. “At one point with 4:40 to go I turned to my assistants and said ‘Do we want any subs?’ And I had Brandon [Jennings] and Andre [Drummond] standing up going, ‘Hell no!’ You know this group is rocking. So that’s what we’ve got right now attitude wise, it’s different people every night and nobody seems very concerned about it. They just want to try and win games.”

The key players in this situation are Drummond and Monroe, who have to sacrifice some playing time in order to give the other the space to roam around the paint unimpeded. While they are both playing like All-Stars, neither is guaranteed to be on the floor in the fourth quarter, making it harder to put up the consistent scoring numbers that the voters look for.

With the exception of their big men, everyone in Detroit’s rotation can shoot 3’s - Brandon Jennings, DJ Augustin, Jodie Meeks, Kentavious Caldwell-Pope, Kyle Singler, Caron Butler, Anthony Tolliver and Jonas Jerebko. On a given night, any of those guys can be the one who gets hot from beyond the three-point line. The Pistons space the floor and zip the ball around like they are the San Antonio Spurs - it’s the kind of system that can rescue a lot of guys careers.

Some regression is inevitable, but the Pistons would have to regress a lot to not be a factor in the Eastern Conference playoff race. Despite their 12-25 record, they are only 3 games out of the final playoff spot, behind two teams - Miami Heat and Brooklyn Nets - who have been shopping some of their older players and could be looking to rebuild. If they can maintain anything resembling the pace they have been on in the last few weeks, they will be a playoff team by the All-Star break.

In that sense, they seem like a mix of the Toronto Raptors and the Phoenix Suns, last season’s two biggest surprises. Like the Raptors, the Pistons didn’t start winning until they made a big trade that opened up playing time for some of their young players. Like the Suns, the Pistons success is built primarily around spacing the floor, which is allowing many of their players to play “over their heads”. At the end of the season, like in Phoenix last year, expect a number of Detroit’s players to have career seasons. Such is the magic of four-out basketball.

When the playoffs start, the Pistons are easily going to be “the team that no wants to see” in the first round. Any team that puts that much floor spacing around a guy as big and athletic as Drummond and another guy as big and skilled as Monroe is dangerous. Under Van Gundy, the Pistons are playing the same style as the Spurs and the Heat in the last few NBA Finals and neither of those teams had big men like Monroe and Drummond.

The revolution is happening and it’s being televised in Detroit.