The Case For Dante Exum: Tools Over Stats 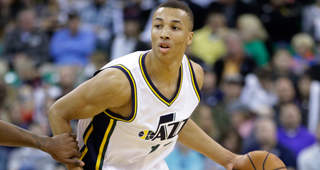 An ankle injury cut short Dante Exum’s stint in Summer League before it ever really got a chance to get going, as the second-year Utah Jazz guard rolled his ankle in the final minutes of their first game and he was held out as a precautionary measure for the rest of the summer. The result was that fans didn’t get much of a chance to see how Exum would look against inferior competition after an up-and-down rookie season that saw him take a starting spot from fellow lottery pick Trey Burke but post some fairly meager offensive statistics that have many down on his overall potential.

The numbers explain the biggest knock on Exum’s game as a rookie - that he wasn’t very aggressive and he spent most of his time standing in the corner and not making much of an impact on the offensive side of the ball. And while he wasn’t very effective individually, the more important part was that he did a good job of playing his role on a Jazz team that was very effective with him on the floor. You have to look at young players' production within the context of the team around them and from that perspective there’s nothing really to worry about when it comes to Exum. He still shows all the signs of becoming a really good player in the NBA for a long time to come.

Most rookies who get significant playing time right away have the luxury of playing on a bad team going nowhere that can afford to let them play through their mistakes. When Exum and Rudy Gobert were inserted into the starting line-up in January, the Jazz suddenly became one of the best defensive teams in the NBA and a threat to any team in the league on a nightly basis. After a very slow start to the season, they managed to almost get back to .500 and finish the year with a 38-44 record. They look poised to be a real threat to jump into the playoff picture in the Western Conference this season.

Gobert got most of the credit for Utah’s defensive surge but Exum played a significant role as well. It starts with his length and athleticism - at 6’6 195 with a 6’9 wingspan, he combines exceptional quickness with one of the longest frames in the league at his position. With two of the best interior defenders in the league playing behind him in Gobert and Derrick Favors, Exum could extend out and use his length to pressure opposing PG’s, the vast majority of whom were giving up a substantial number of inches. It’s just very hard to shoot over the top of a super-sized PG like Exum on the perimeter and there wasn’t much space to operate behind him either.

As a franchise, the Jazz have made a killing by drafting to a physical prototype. They are bigger, longer and faster than their opponents at almost every position and the two guys in their young core who struggled the most on defense - Trey Burke and Enes Kanter - were the only two who don’t fit that mold. With Exum (6’6), Alec Burks (6’6), Rodney Hood (6’8), Gordon Hayward (6’8), Trey Lyles (6’10), Derrick Favors (6’11) and Rudy Gobert (7’1), they can overwhelm teams with length.

Going into next season, Exum should be one of the biggest beneficiaries of Burks return to health after the SG missed most of the last season with a shoulder injury. Playing on a starting unit with Favors, Gobert and Joe Ingles, there wasn’t a lot of room on the floor to operate and Exum was forced to be a spot-up shooter, which was not the strength of his game coming into the league. In that regard, his 31% shooting percentage from 3 on 3 attempts a game was encouraging, as the perimeter jumper was the one real question mark in his scouting report.

Exum really made a name for himself at the U19 world championships in 2013, where he carried Australia to the semifinals as a do-everything 6’6 combo guard. He hasn’t gotten a chance to go up against the best players his own age since. A year ago, he was playing high school basketball in Australia, which is about the farthest possible jump from NBA competition as can be imagined. The lifestyle transition from being a relatively anonymous high schooler half the world away is difficult enough before you even get into having to face the best players in the world on a nightly basis at the toughest position in the league. There are no nights off for PG’s in the Western Conference.

From a developmental perspective, it would have made a lot of sense for Utah to let him spend most of the season learning in the D-League or watching from the bench, letting him get accustomed to life in the US before throwing him to the wolves in the NBA. However, for as limited as he was on offense, the Jazz were still better off with him on the floor. With Hayward playing with the ball in his hands for most of the game, they didn’t need Exum to be an offensive initiator.

In his brief stint in Summer League, he showed what he could do when playing with more aggressiveness. Matched up primarily against Marcus Smart, he put on a show in what was (to be fair) a home game in Salt Lake City, with 20 points, 5 rebounds and 5 assists. The biggest difference was the extra 10 pounds of muscle he added in the offseason, which allowed him to play with more confidence when he attacked the lane and survive more punishment around the basket. He’s a good ball-handler with good floor vision and he’s extremely fast so it’s difficult to stay in front of him when he has his mind made up to attack the rim.

As a rookie, he was the youngest starter at his position in the league and he was really scrawny so it was easy for older and stronger players to push him out on the perimeter. As he adds more weight on his frame, not only will he have an easier time drawing fouls but he should also be able to post up smaller PG’s and take them on the block. The more he develops physically the better he should become and he just turned 20 years old.

Even as a second-year player, the Jazz won’t need Exum to be a great offensive player. Burks and Hayward will shoulder most of the load on offense and they will win games with their defense and getting out in transition after forcing bad shots or turning the other team over. All he needs to do is continue to improve and play within himself and play off their more experienced players until he’s ready to grow into a bigger role.

What makes Utah so exciting going forward is all their young players will be able to grow together and develop into a unit better than the sum of its parts. They have eight first round picks on their roster under the age of 25 and they can all play. They can afford to bring along their 20-year old point guard slowly, especially when he’s such an outlier at his position in terms of physical tools. I’ll take tools over stats with young players every time and if Dante Exum ever figures it all out, the Jazz are going to be a special basketball team.