The Situational Changes For D'Angelo Russell 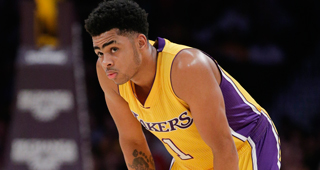 D’Angelo Russell certainly had the numbers to be the No. 2 overall pick. As a freshman at Ohio State, he was a consensus first-team All-American who averaged 19.3 points, 5.7 rebounds and 5.0 assists on 44.9% shooting. It was a meteoric rise for a guy who wasn’t considered a one-and-done prospect coming into college. Karl Towns, Jahlil Okafor, Myles Turner, Justise Winslow and Stanley Johnson were going to be lottery picks before the season started. Russell had to play his way into the draft.

The good news was that he was in a perfect situation at Ohio State. Thad Matta likes to build his teams around one ball-dominant star, with the baton passing from Evan Turner to Jared Sullinger, Deshaun Thomas and Russell. Matta’s teams always play good defense and they always have shooters, which opens up the floor for one player to dominate the ball and make a decision to shoot, pass or drive depending on what the defense gives him.

The point guard in Matta’s offense is a lot like the quarterback in Urban Meyer’s offense. Both coaches spread out the defense and simplify the decision-making process for the triggerman, whether it’s Turner or Russell or JT Barrett or Cardale Jones, all guys who played better than their recruiting rankings in Columbus. The key with all of them is that you don’t want to draft a spread QB and put them in a pro-style offense and you don’t want to draft a spread PG and put them in a conventional two big man offense. You want them in a situation where they can maximize their skill-set like they did in college, which hasn’t exactly happened with the Los Angeles Lakers.

The first problem is the Lakers don’t space the floor. Roy Hibbert is one of the slowest players in the league and he can’t make a shot outside of 15+ feet. The best way to utilize him is to slow the tempo, throw the ball into him and let him hit cutters out of the post. Julius Randle is an exciting young prospect but the biggest question about his offensive game is his ability to stretch the floor. Most defenders play 5+ feet off him in order to cut off his drive and force him to beat them from the perimeter.

The end result is there’s nowhere for Russell to go, no driving lanes like the ones he had at Ohio State. Hibbert and Randle’s men spend most of the game camped out in the paint, daring the Lakers big men to shoot the ball. Running the two-man game is the strength of Russell’s game but it’s pretty easy to neutralize the big man rolling to the rim when the other interior defender is sitting in his pocket as opposed to guarding out to the three-point line.

It’s the same thing off the bench as none of the trio of Larry Nance, Brandon Bass and Tarik Black can drag their man out on the perimeter. Ryan Kelly can shoot 3’s but his defense has him buried at the end of the bench. Metta World Peace is 36 years old and has taken 12 3’s all season and he might be the best stretch big man on their roster. Russell needs spacing around him and he’s playing with some of the least spacing big men in the league.

The second problem is the sheer number of perimeter players on the Lakers roster who need the ball in their hands. Take a look at these usage ratings from last season - Kobe Bryant (34.9), Lou Williams (27.0), Nick Young (26.0) and Jordan Clarkson (23.0). What rookie PG is turning these guys into role-playing spot-up shooters? Those guys are going to hold the ball and whoever is running point is going to have to adjust to them.

It’s hard to win games in the NBA without big men who can shoot and wings who can play defense and the Lakers have neither. Those are the types of players that Russell had around him at Ohio State and those are the types of players the Lakers need to bring in if they are going to get the most out of him. If they were looking to complement the guys they already had, it would have made more sense to draft a big man who can block shots and stretch the floor - like Myles Turner or Kristaps Porzingis - or a wing player who can defend multiple positions and doesn’t need the ball to impact the game - like Justise Winslow or Stanley Johnson.

Of course, if they had taken any of those guys, they would have been killed on draft night for taking a project big man or a perimeter player who didn’t put up the same type of NCAA stats as Russell. Six months later, no one would blink if you said that all four are better prospects and it’s unclear whether any of the teams that drafted them would trade their rookie for the No. 2 overall pick. None of which is to say that Russell was a bad pick or that he won’t end up having a career better than any of the guys drafted behind him. When it comes to young players, we are all prisoners of the moment.

If there’s a downside to the incredible wealth of statistical information out there, it’s that it can only tell us so much about a guy’s skill-set as opposed to his situation. There are a million different stats you can look at when it comes to the way Russell played at Ohio State and the way he is playing with the Lakers and they are all going to tell you the same basic thing. Russell is a ball-dominant player who didn’t play much defense in college and he’s coming to an NBA team that struggles with spacing the floor and playing defense and has five other guys who want to initiate the offense from the perimeter.

The key with building a young core is identifying each player’s skill-set and putting together guys whose games fit together and who can be better than the sum of their parts. The future of the Lakers is the trio of Russell, Clarkson and Randle, which means that everyone else on the roster should be able to defend multiple positions, stretch the floor and move the ball. Ask yourself how well that description fits any of the other players on the Lakers roster and you can see why D’Angelo Russell is having such a difficult rookie campaign.