Giving Emmanuel Mudiay The Keys To Everything 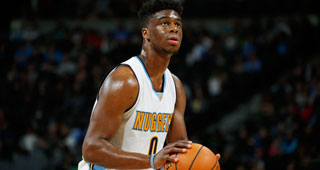 Unfortunately for professional sports teams, there is no universal blueprint for athletic development. As much as franchises hope a simple formula -- hard work + solid fit + playing time = future Hall of Famer -- would help them squeeze the most potential out of their multi-million dollar assets, no such thing exists.

When it comes to the NBA in particular, the only thing we truly know about development is that young prospects definitely need one vital vitamin for their professional growth: minutes. But while playing time is a key ingredient in unlocking potential, it’s certainly not a guarantee of success. That is what makes the handling of rookie Emmanuel Mudiay in Denver such an intriguing NBA case study.

For better or worse, the Nuggets have basically handed Mudiay the keys to the car (and house, and vacation home and everything else) and let him go from the very start -- Summer League in Las Vegas. Mudiay showed some promise there but hardly looked like a polished youngster ready to take the NBA by storm.

That hasn’t stopped Denver from playing him the second most minutes (450) of any rookie in the league. And in those minutes, the Nuggets and head coach Mike Malone have not put in an offensive concepts to rein him in. It’s pretty much been Mudiay on the loose in the Mile High City, as evidenced by the rookie’s sky high usage rate of 28.1.

The results of this trial by fire have been, well, not good. Mudiay is sporting a ghastly True Shooting percentage of 40.6 while rounding out the NBA’s top three in turnovers behind James Harden and Russell Westbrook. On the bright side, however, the youngster is also 10th in the league in assists.

Overall, Mudiay’s inaugural NBA season is reminiscent of the train wreck that was Westbrook’s rookie year, both in terms of how he is being handled and the resulting production. Here’s a look at Mudiay’s first 14 games stack up to Westbrook’s overall numbers from his first season (per 100 possessions) according to Basketball Reference data:

Mudiay trails Westbrook in most categories but his playmaking is slightly ahead of where Oklahoma City's All-Star guard was as a rookie. That edge, however, has not saved Mudiay from being a drain on a surprisingly competitive Nuggets team -- an interesting difference given that despite Westbrook’s rough first year, the Thunder weren’t noticeably worse with him on the floor. Denver, on the other hand, is substantially better when their prized rookie is on the bench, nearly five points so (-2.1 to -7.0) to be exact, per NBA.com data.

It’s exploring the context of this data that makes how Mudiay is being handled so interesting. Because of the Nuggets have a more impactful supporting cast than Westbrook’s rookie year Thunder squad (apologies to Joe Smith and Desmond Mason)  -- thanks to young veterans like Will Barton, Danilo Gallinari and Kenneth Faried -- there’s an argument to be made that Mudiay would be better served earning his minutes in a more structured role off the bench. It seems like a more suitable path for a player whose unrestrained approach is clearly not helping a franchise that’s not exactly in the “bottoming out” stage of a rebuilding process. Besides, if limiting Mudiay to a more reduced role helps Denver stay in the playoff chase longer, it would mean more meaningful games deeper into the season.

All the proposed benefits of such an approach, however, have no footing in an increasingly data-driven world. Things like “discipline”, “winning habits”, and “meaningful minutes” are just buzzwords used by coaches. Because in theory it’s easy to argue that Mudiay playing 15-20 minutes a night off the bench for a team playing important games for a potential playoff spot (or one that actually gets into the postseason) is more impactful than him playing 30+ for a team that finishes with 25 wins. And in theory it could be argued that slowly giving Mudiay freedom rather than handing it to him all at once would make for a more controlled and less turnover prone player.

But theories don’t have any quantitative footing. The only thing that we know for sure is what we stated above -- getting minutes is the only surefire ingredient to successful player development. The rest is all just subjective assessment. And after all, Westbrook went through a miserable first season playing through mistakes on a terrible team and he turned out to be a pretty decent player, didn’t he?

On top of that, maintaining the status quo seems like an even more obvious option since neither veteran point guard alternative on the Nuggets roster -- 33-year-old Jameer Nelson (34.1 percent from the field, 7.21 PER) or 32-year-old Randy Foye (29.8 percent from the field and 3.59 PER) -- is lighting up the league (though the Denver is much, much better with Nelson on the floor). And even if Nelson (or Foye) were playing lights out, there doesn’t seem to be much sense in putting them on the floor ahead of a 19-year-old that is clearly the future of the franchise.

So on the surface, the Nuggets are impacting Mudiay’s development in the only way that can be measured: by playing him big minutes and letting him figure the NBA out. But that on-the-court approach, while vital, isn’t the only thing that will ultimately factor into Mudiay’s success (or failure). The things we don’t see -- his professionalism, who he is around off the court, how he’s handled within the franchise and these ethereal habits he is building by being handled this way in his inaugural season -- will also be important factors in his professional development.

And while following Mudiay’s developmental path will allow NBA fans to gain insight to how Denver’s franchise will fare going forward, it will do a lot more than that. Mudiay’s career will also give us another chance to study what helps young players survive and thrive in the NBA.