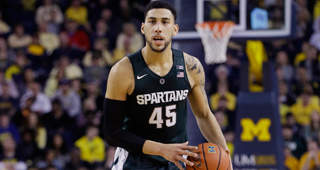 Were it not for a knee injury to Denzel Valentine, Michigan State would probably be the No. 1 team in the country. They were 13-0, with wins over Kansas, Louisville and Florida, when Valentine went down. They stumbled without him, needing OT to knock off Oakland and then losing at Iowa, and then lost three consecutive Big Ten games right after he returned. The Spartans have hit their stride now that he is back at 100%, with their only loss in the last month coming in a road OT thriller at Purdue.

Everything starts with Valentine, a jack-of-all-trades 6’6 senior forward. His numbers speak for themselves - 19.6 points, 7.3 assists and 7.5 rebounds a game on 47.3% shooting, including 45.1% from 3 - and they don’t even really do justice to the effect that he has on the game. Valentine is the rare combination of a ball dominant superstar who doubles as a glue guy, a guy with an incredibly high basketball IQ who knows exactly what Michigan State needs on a given night and can always give it to them. Whether it’s passing, shooting, rebounding or scoring, Valentine can do just about everything on the court at a high level and he’s almost unstoppable at the NCAA level.

Even though he’s not a great athlete, his offensive game is so complete that he can still get buckets against NBA-caliber defenders who have the physical tools to shut him down. He combines Buddy Hield’s shooting with the floor game of Kris Dunn. If defenders give him room, he can stroke shots off the dribble. If they play his shot, he can drive the ball. If they collapse on him, he can set up his teammates. A defender has to give the offensive player something and Valentine can take whatever they give him.

Just as important, Michigan State has the perfect supporting cast around him. They start two knock-down shooters on the perimeter - Bryn Forbes (49.4% on 6.2 3PA’s) and Eron Harris (42% on 2.9 3PA’s) - so there’s always room for him to attack the basket. Having three 40%+ shooters from 3 is the best way to space the floor if you are going to start two traditional big men - freshman Deyonta Davis (6’10 245) and senior Matt Costello (6’9 245). Costello handles the banging and the post scoring while Davis can protect the rim and match up with smaller and quicker frontcourt players.

All the pieces in East Lansing fit well together, which has always been the key to Tom Izzo’s ability to exceed expectations in March. There’s obviously a lot of randomness in the NCAA Tournament, but there’s also an underlying pattern to what’s going on. It’s the ultimate test for how a team is constructed - by the second weekend of the Tourney, games are seven-game playoff series in fast forward, as coaches furiously make adjustments and tweak their line-ups and their rotations to attack the weak spots of their opponents and cover up their own.

There’s no one better at making adjustments than Izzo, but a coach can only be as good as his players. While he’s had his fair share of NBA players over the years, people look at the lack of high numbers of McDonald’s All-Americans and his success in March and attribute it to coaching wizardry. The key is that he builds teams that may not always have pronounced strengths but don’t have any pronounced weaknesses either. There’s usually not one thing you can exploit to beat Michigan State in March - you just have to have a much better team that can beat them on pure talent.

That’s exactly what happened last season, when Michigan State lost to Duke in the Final Four. Like the rest of the country, the Spartans didn’t have any answer for a team that featured a lottery pick at C (Jahlil Okafor), a lottery pick on the wings (Justise Winslow) and another first-round pick at PG (Tyus Jones). Michigan State was able to get past teams with relatively similar talent before losing to a Team USA farm team. At the highest levels of the game, the teams with the best players are generally going to win. Izzo has been to seven Final Fours, but he has only won one national title.

When he won the championship in 2000, he had a team with three future NBA players - Morris Peterson, Charlie Bell and Mateen Cleaves - none of whom were stars at the next level. The difference between that season and most of his other Final Four appearances was that there weren’t a lot of future NBA stars playing in the final weekend. Florida, whom they beat in the championship game, had Mike Miller, Udonis Haslem and Donnell Harvey while UNC had Brendan Haywood and Joseph Forte and Wisconsin almost single-handedly took offensive basketball back a generation by winning games with scores in the 40’s and the 50’s.

There wasn’t a lot of elite talent in that Tournament, which put Izzo on an even playing field with his competition. You can see that in the 2000 NBA draft, which is widely considered one of the weakest in recent memory. Only three players from that draft - Kenyon Martin, Jamaal Magloire and Michael Redd - played in an All-Star Game and only Redd ever made an All-NBA team. It was the kind of year when a great NCAA team without elite NBA talent could conceivably cut down the nets.

What should excite Michigan State fans is that 2016 could be a replay of 2000. The two best prospects - Ben Simmons at LSU and Brandon Ingram at Duke - are on teams that probably lack the pieces to go all the way while every other NCAA player projected to go in the lottery has numerous holes in their game.

2015 was the year of the superteam, with Wisconsin, Duke and Kentucky making the Final Four behind an astounding 15 future NBA players. That’s not going to happen this season, no matter who ends up making it to the final weekend. In a year without any great teams, your best bet is to go with the most complete team and no coach does a better job of building a complete team than Tom Izzo.