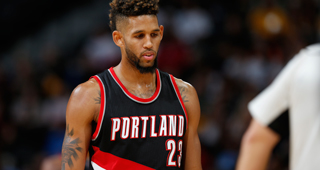 Three years ago, I appeared on RealGM Radio with Danny Leroux to talk about the emergence of the Portland Trail Blazers as a playoff team and the glaring lack of depth on their roster, specifically a dearth of capable bench scorers. One name that was discussed was a then 21-year-old swingman, Allen Crabbe.

Crabbe was a light’s out shooter who couldn’t escape bench splinters as he played a team-low 100 minutes during the duration of his rookie season. The rationale for Crabbe's minimal playing time was his inability to consistently defend his position, as well as a lack of ability to score anywhere but the three-point line. Flash-forward to today and Crabbe is now a highly regarded 3-and-D role player who has become a solid finisher in traffic as well as a terrific midrange shooter. He is considered by most one of the most appealing restricted free agents in the NBA and sure to receive contract offers exceeding $10 million per year.

Crabbe’s game emerged at the absolute best time for both himself and the Trail Blazers, as he was the bench scorer they have so desperately needed all of these years. However, his scoring is not what makes him such a unique asset – he averaged just 10.3 points per this year – it was the combination of elite shooting and terrific on-ball defense. His shooting stroke, which has been picture-perfect since he entered the league, reached elite levels this season, as he was one of only nine players in the NBA to shoot 45% from the field, 39% from 3 and 85% from the line. At 23, he was the youngest member of that club beating out two all-stars in Kawhi Leonard and Klay Thompson.

While his 3-point shot has been consistent (38.5% for his career), it was his midrange game that really opened up the floor for his teammates this year and created the biggest problems for opposing defenses. Crabbe found space in the Blazers flow offense by constantly using staggered screens and an occasional quick dribble in order to find his spot as he shot a career-high 44.3 on 2-point shots beyond 16 feet this year. For perspective on that number, Steph Curry shot an identical 44.3% on 2-point shots beyond 16 feet this year.

Additionally, Crabbe provided the Blazers with terrific defense as he was often tasked with guarding the opposing teams best perimeter player. While many players get more glory as defenders due to flashy stats like steals, Crabbe was more often than not called upon to shadow and face guard top opposing players in order to get the ball out of their hands. While Crabbe is capable of swiping the ball from opponents, his defense is more predicated on fundamentals, taking very few chances while staying in front of his opponent at all times.

While Crabbe still has a few glaring faults in his game, namely ball handling and producing anywhere other than scoring (his PER is a surprisingly low 12.2), his rare combination of skills could possibly result in him signing a contract this summer in the $12 million to $15 million per year range. The high price may scare a few teams out of bidding for his services that should not be the case for Portland, who must match any offer he receives. As was notable this season, there is simply no one else on the Blazer roster that can do what he does. Without a pick in this years draft, a free agent period where almost every team has money to burn, and an increased need around the league for players like Crabbe, the Blazers will face an uphill battle in finding any additional quality two-way wing players, making Crabbe that much more valuable to the team. While the price for him may be high, if the Blazers intend on building on their second round appearance this year and become an elite team in the Western Conference, re-signing Allen Crabbe needs to be a top priority this summer.

Haven Kaplan-Miner is a contributing writer for RealGM.