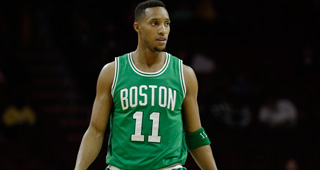 The Portland Trail Blazers were an offseason winner in 2015 with a number of aggressive signings for players still going upwards on their career trajectories. Neil Olshey had a background in player development and that has been a major part of Portland’s success during his tenure as general manager.

With cap space again this offseason, the Blazers targeted Chandler Parsons at the max as a combo forward and when he agreed to sign with the Memphis, Olshey quickly signed Evan Turner instead on a four-year, $70 million contract.

The versatility that made him look like a potential future All-Star as the second overall pick in 2010 settled nicely as a complementary piece with the Celtics. Turner was a solid playmaker on Boston’s second unit with a tremendous assist rate for a wing. The Blazers have a pair of ball dominant players in Damian Lillard and C.J. McCollum so the fit with them appears awkward on the surface, particularly since Turner has shot below 30 percent on three-pointers in each of the past two seasons, though he did shoot a passable 34 percent from the corner. But Portland presumably sees Turner taking some of the ballhandling burden away from Lillard and McCollum, which will allow them to play off the ball with more frequency as the Warriors do with Stephen Curry.

The Blazers have a solid young core and Turner will turn 28 at the start of next season and this feels like a drastic move in the opposite direction. The logic of the move is similar to when the Warriors acquired Andre Iguodala in 2013 in what felt like an expensive overpay considering the contract, the draft picks given up to make it work and the presence of Klay Thompson and Harrison Barnes on the wings. But signing Iguodala transformed their defense while also allowing them to play a pass-heavy offense.

Turner isn’t nearly the caliber of player Iguodala was in 2013, but he could have a similar impact if Terry Stotts finds the right formula of how to use him.

Boston was 2.2 points per 100 possessions better on defense with Turner on the floor. The Celtics had Avery Bradley and Jae Crowder deservingly get credit for their fourth ranked defense, but Turner played an undervalued part in their success on that end of the floor.

Turner defends isolations well and his size protects against the Blazers’ small backcourt. Portland will presumably move Al-Farouq Aminu up to start at power forward and Turner’s price is low enough where they should be able to retain their restricted free agents.

The Blazers had to spend their cap space on someone and this is a considerably wiser investment than Parsons on a four-year, $95 million deal. It is rare to love a free agent signing for a player of Turner’s caliber but it should be a more than fine deal at an annual average of $17.5 million, especially if he can be the mid-30s three-point shooter he appeared capable of earlier in his career. The faith I have in Portland’s program makes that improvement seem possible even for a 28-year-old.

Grade for Blazers: B-

Turner cashed out the rest of his prime with this four-year deal and he gets to play for a team that was in the playoffs while being promised a starting role. One would guess there could have been more money out there somewhere else for Turner but the difference was likely negligible from Portland’s likely “take it or leave it” offer on the opening day of free agency.

Turner signed a two-year, $6.7 million deal with the Celtics in 2014 and he surely made good on it by outperforming that amount in each of his two seasons.

Grade for Evan Turner: A

The Celtics overachieved in each of Turner’s two seasons with the team and he was a large reason for it. Boston has built a surprising contender with a number of team-friendly contracts and Turner’s deal unsurprisingly was no longer going to be so attractive reentering the open market and letting him walk was an easy decision for Danny Ainge. The Celtics have enough very good, not quite great players like Turner and they’re dead-set on doing everything within their power to acquire one or more of those great players either through cap space or a trade and he understandably didn’t fit into those plans. If the Celtics are unable to pull something significant off this offseason, there will be a playmaking void and possible regression without Turner.

Grade for Celtics: A