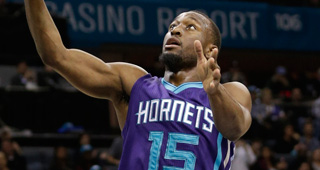 There is a feeling that arrives, when a great player gets the ball in crunch time. It’s like being turned around on a crowded street corner—your phone is dead; you’re trying to navigate a thicket of double-wide tourists and grouchy locals—and spotting a familiar landmark amidst the throng. All of a sudden you know where you are. Steph Curry is pulling up from 26 feet, just as his defender retreats a half-step too far. LeBron James is driving the lane. Chris Paul is at the top of the key, calling for a screen. These are things we’ve seen many times before, moving to the same rhythm they always have. For a few moments, the game’s chaos forms a shape you recognize.

Kemba Walker could do anything. He’s going to shoot, almost definitely, but from where and what angle isn’t for sure. His favorite shot is a midrange step-back where he feints toward the basket, crosses over, takes a half-hop backwards, and fades slightly as he releases it, but he’s too short to lean on that move all the time, so he’s had to add floaters and jab-step threes to his game. Occasionally, he’ll just lance through everybody and score.

He’s not great at any of this. He looks awesome doing it—so powerful for his stature, like a labrador-sized rhino—but Kemba has never been efficient. He just capped his best professional season, in which he shot 42.7 percent. The feeling that visits when Kemba has the ball in crunch time is only a cousin of certainty. You know that he thinks he knows what he’s doing, even if he’s about to give lie to that notion by arcing an off-balance 19-footer over a double team. What you get from Kemba is not a sense of control or calm, but an aching desire to seem that way, to ad-lib with such authority that it will retroactively seem as if he had a plan all along. After every big basket he makes, Kemba affects the forced-stoic pose of the slightly overmatched star. It’s hyper-real surety: insecurity buried in a grave, with a shopping plaza built on top of it.

He stands out on a Charlotte team that’s been constructed by a behind-the-curve front office. The franchise drafted Michael Kidd-Gilchrist on the cusp of an era in which wing players who can’t shoot would become a huge liability and signed Al Jefferson as diplodocus-like big men were becoming nigh unplayable against the league’s elite teams. (And picking Frank Kaminsky over Justise Winslow was just a simple, screaming mistake.) Steve Clifford is an adept problem-solver, but the way he has figured out how to maximize this moth-eaten roster’s talent is through teaching his players to turn games into an aggravating experience for opponents. As a result, the Hornets can be a finely tuned bummer. They don’t make many mistakes at the cost of rarely attempting the spectacular. They’re admirable, but the act of admiring them is a whit painful.

In other words, they need a player like Kemba Walker. The Hornets certainly need him in order to win games, but from an aesthetic perspective, they need a player of his spasmodic charisma—quick, confident, as given to delirious game-winning drives as team-torpedoing cold streaks—to enliven what would otherwise be a middling squad grimly managing its own deficiencies. On a good night, Clifford’s sound strategy gets the Hornets to the fourth quarter, and Kemba, in his wild way, takes them home—or careers into a ditch near home, anyway.

What a fan wants from their team tends to depend on where the franchise is at in its developmental arc. Basement-dwellers call out for anything that provides optimism: exciting young talent, a decent coach, a degree of competence that will save them from the indignity of losing to the Spurs’ bench by double-digits. The league’s elite need steady hands, experienced stars that have proven their mettle and provide a degree of comfort when the game is big and the score is close. Then there are the in-betweeners. Your Hornets, your Pacers, your latter-day Grizzlies. There is something to be said for squads that clear .500 and don’t beat themselves, but what’s said about them isn’t often ecstatic or laced with fifty-cent adjectives. No one raves about intelligently defending the pick-and-roll or keeping opponents off the offensive glass, which are the sorts of granular, not-terribly-interesting things that differentiate the NBA’s middle class from its lottery-bound contingent. The Hornets and their ilk grind through the schedule almost soundlessly.

This is why Kemba Walker matters. He’s not salvational like LeBron or Steph—you do not know where you are, when Kemba has the ball—but he’s essential to Charlotte fans and League Pass dorks trying to enjoy a Hornets game on a Tuesday night in February. He breaks up the monochromatic sprawl of a 45-win season, burns some of those games into the memory with his haphazard successes and failures. Kemba is the dolphin that leaps above the placid surf; he’s the jalapeño in the supermarket salsa. Without a player as daring as he is, his team would merely function; they would never astound. But Kemba is dynamic and a little bit out of control; he’s starting toward the basket, as the clock ticks down inside a minute, and it’s anyone’s guess where he and the ball will end up. He makes the Hornets fun. He gives them what they require.