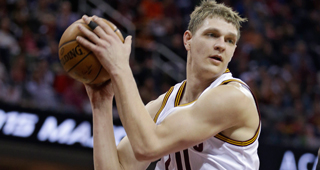 The fog rolls in, but it’s not fog. It’s a green-gray miasma that slithers down the chimneys of the one-room cobblestone shacks and suffocates children in their sleep. The townspeople don’t know this yet, but the hero of the story has angered a bog-witch—stole a few vials of something for his ailing daughter—and now the hag has cursed his small farming village. In the morning, grieving parents spill out of their homes into the town’s center. They shriek at the sky; they accuse one another of trespass; they sob disconsolately. Timofey Mozgov is not the hero, and he is not in the town square, haranguing the gods. Timofey Mozgov is sleeping a deep, dopey ogre’s sleep on a bed that’s too short by a half a foot, so his calves hang over the frame. Anyway, he doesn’t have kids.

The Big Old Pile of Meat NBA center got irrelevant fast. Roy Hibbert’s Emilio Estevez-style plummet into obscurity is the most infamous example, but Mozgov going from regular starter in the NBA Finals to bench fixture in the space of eight months is more emblematic of the trend. In 2014, Roy Hibbert fell into a karmic sinkhole with the rest of the Pacers and has had the shakes ever since. This past season, Mozgov was doing the same stuff he always has—standing in the lane with his arms up, converting every third alley-oop, mouth-breathing—and was pushed out of the Cleveland Cavaliers’ rotation because Tyronn Lue determined it simply wasn’t working. The problem wasn’t the way Mozgov was playing so much as what he is, which is an unremarkable seven-footer, the likes of which have been common in the NBA since teams decided they needed an extra-tall dude on the roster who could at least try to bother Wilt Chamberlain.

It wasn’t even a question whether the Cavs were going to re-sign Mozgov. He only played 76 minutes in last year’s playoffs, the bulk of those in the throes of blowouts. The Lakers tossing four years and $64 million at him has been regarded mostly as a joke about how egregiously out of step with the rest of the league Mitch Kupchak and company have been over the past few seasons. It’s silly that a troll-born who looks like he’s teetering on a cliff’s edge when asked to defend outside six feet would make that kind of money in 2016, but come to think of it, it has always been a little silly. Shawn Bradley was a better punchline than he ever was a basketball player.

It’s a wonder Jim McIlvane ever shared a frontcourt with Shawn Kemp, and that Greg Ostertag started for those late 90s Jazz squads. Jason Collins stayed in the league three years longer than he should have solely because he had a curious knack for giving prime Dwight Howard trouble. Eric Montross was never any good, but played until he was 30. Kendrick Perkins was a genuinely useful player for a while, then he lost a step and the league dropped out from under him like a runaway skateboard. He played 20 minutes a game for a title contender as recently as 2014. Many of the high points of NBA history are marked by extraordinary seven-footers who dominated the league and racked up rings, but there are also, scattered among the stat sheets, chipping in six points and five rebounds, just an absurd amount of similarly huge men who contributed next to nothing. Lots of teams employed one of the latter.

If a team has what can be called a traditional center these days, they’re breathtaking freaks such as DeAndre Jordan and Hassan Whiteside, who bear a resemblance to turn-of-the-millenia big men like Marcus Camby and Theo Ratliff. They’re instinctive shot-blockers, physical rebounders, and agile rim-runners. Or they’re skilled like the Gasol brothers and Brook Lopez. You give them the ball and let them work. The reason Knicks fans are so geeked about Kristaps Porzingis is not necessarily that he’ll challenge for MVPs, but that he’ll be a new kind of center: a gargantuan fellow with range out to 24 feet. If a center can create space on offense and take up a bunch of it on defense, that makes the rest of the team’s job significantly easier.

When new paradigms arrive, they cast a gauze over the past and we can never see it clearly again. Abiogenesis and flat Earth theories are quaint to modern eyes. What a thirteen-year-old thinks is wisdom, an adult understands as naïveté. We’re at a strange moment in the NBA’s history: we’re just past the point where the three-point line’s potential has been fully realized and, in concert with that, lumbering paint-cloggers are on their way out, or at least more marginalized than they have ever been. Revelations often appear self-evident after they emerge, but this one feels particularly obvious: why have the league’s franchises signed so many players over the years whose primary skill is mass? Hasn’t a six-foot-seven guy who can pass and shoot always been more valuable than a seven-footer with ping pong paddles for hands?

So the Big Old Pile of Meat is endangered. He’s got a pitiable black rhino vibe to him these days, but there has always been something plaintive about him. He tends to be fragile, because humans are not meant to be Clydesdale-sized. He’s usually impressively coordinated, all things considered, but he looks clumsy compared to world-class athletes with less unwieldy frames. When he gets dunked on, it’s an event.

Timofey Mozgov adds to all that a typically Russian blankness. His default expression is agog. He’s so large that it seems the game should be easy for him—he really does look like he could dunk Chris Paul, so a basketball shouldn’t be much trouble—and then the second he moves it’s instantly apparent how much strain goes into getting up and down the court, the cumbersomeness of his steel beam limbs. Maybe the league’s coaches and executives have finally gotten past the first thing and truly noticed the second. Or most of them have. Mozgov and a few of his brethren are still at the fringes of the NBA’s story. They’re not doing much of anything, but they’re there.