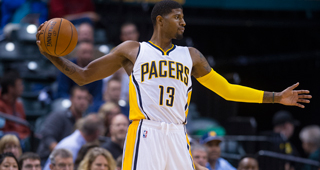 The Pacers are going to run. They swapped out George Hill for Jeff Teague. Thad Young will help them space the floor and keep Paul George at small forward, where he’s most comfortable. Monta Ellis can pair with Teague and captain the second unit. Myles Turner will build on a great rookie season. C.J. Miles and Rodney Stuckey aren’t half-bad bench options. Al Jefferson has arrived, to remind us that Larry Bird is 59 years old and can only be so modern. The roster could use more shooting, but the Pacers did what they could over the summer. And besides, the point of this project—helmed by Nate McMillan, who’s an inspired hire in the way scrambled eggs are an inspired breakfast—is for the team to be more fun, not necessarily more successful. Frank Vogel made his squads about as good as they could possibly be, and in doing so, also made them nigh unwatchable. When the bulletproof ceiling is a second-round playoff defeat, why not entertain people instead?

This aesthetic overhaul serves as distraction, too. Paul George has three years left on his contract, and the Pacers can’t yet see a path toward keeping him. A teardown would take too long and the chances of bringing another franchise player to Indianapolis via free agency or trade are slim. The Pacers have done right by George. In contrast to the way the Bulls sold out Derrick Rose while he was rehabbing his various knee injuries a few years ago, Larry Bird and Frank Vogel were patient with George as he got himself back up to full health following a horrific leg break he suffered in the summer of 2014. Bird has given George the best teammates he can find, even if the names have never been big. But a player owes even a considerate employer only so much. If the Lakers are ascendant or some superteam opportunity arises as George becomes a free agent, no one could blame him for leaving.

The 30,000-foot view of most NBA franchises is pretty depressing. Most teams are declining, or finding their way, or bottoming out, or trapped in the neighborhood of 45 wins with no exit strategy, not because their front office isn’t trying to draft one, but because—well, what would you propose the Washington Wizards do to turn themselves into title contenders? Most coaches aren’t markedly better than lots of other ones, and most of the league’s stars are spoken for. And even if they weren’t, they would prefer to play in New York or Los Angeles or Texas anyway.

The Pacers have Paul George’s rights for at least a few more seasons. This is certainly something. There hasn’t ever been anyone who plays basketball quite the way George does. He drives with an uncommon fluidity; it’s as if there’s no lag between when he decides to do something and when his body does it. There isn’t violence or suddenness in his movements: the crossover, the dipping of the shoulder, the leap toward the rim, and the lay-in all seem to be one continuous motion. Even when George’s jumper isn’t falling, it looks good and easy and simple. If part of the joy of watching sports is momentary psychic connection with the players on the field or court—as Novak Djokovic strikes a forehand, you strike it with him—there are few athletes more pleasing to bodily empathize with than George. You track him as he pulls up and fades on a 15-footer and you feel yourself unspooling. (Then you reach for a glass of water, knocking it over.)

The Pacers probably can’t keep a talent like this around for as long as they would like. It’s the minor tragedy of the NBA’s relative backwaters: if they draft one star and can’t find another, they’re likely to lose their best player, if not after his rookie contract, then sometime during his mid-to-late 20s. Dwight Howard, Chris Paul, Carmelo Anthony and LeBron James have all left smallish markets for big ones over the past half-decade, due in part to the fact that none of their teammates were close to their level. Franchises like Indiana, Denver and Cleveland are defined in a sense by their anxiety: when they don’t have a great player, they’re not sure when they’re going to find one—the Knicks and Lakers almost always get a meeting with an All-Star free agent they want; the Pacers don’t even bother to ask—and when they do, the clock is ticking down on when they guy is going to leave.

If there’s no escaping the grip of this anxiety, there are ways of forgetting it. There is a team’s big-picture predicament and then there’s what they choose to put on the floor. Three years is a while and there’s a slight chance the Pacers could get great in some unforeseen way, but in the meantime, they’re instituting a stylistic shift that highlights George’s most appealing attributes: how he plays with a self-contained vigor, how quick and powerful he is while looking like he’s out for an afternoon stroll. In an offense that pushes the ball, he’ll seem more at home than he ever has, and he’ll produce more of the moments only he can produce.

Is this is a solution? Well, Kafka died having never finished a novel, and Max Brod published a few regardless. The future is to be accounted for, but obsessing over it only serves to put a damper on what’s happening here and now. In the end, nearly all of us fail, in our own way. Paul George is a Pacer, and with him they’re striving to play enjoyable basketball. That’s a worthy task, and one that will require most of the organization’s focus and energy in the short-term. Down the road, whatever grim fate comes will come. All they can do is make the most of what they still have.