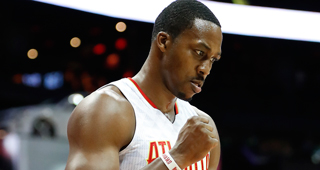 Surely, we didn’t drive Dwight Howard to Atlanta. He had a meeting with Mike Budenholzer and the front office, the numbers and vision sounded about right, and he signed on. Dwight is from there, after all, and reporters gush about the Hawks’ organizational competence. It makes sense that he would have heard a strong pitch, and there weren’t max offers coming in from elsewhere, and he thought this is where I can get back to my old self. Dwight probably doesn’t conceive of Atlanta as a place for him to disappear, some out-of-the-spotlight place that will hide him from the harangues that have been like a moth caught in his inner ear since things broke bad in Orlando. Dwight’s in great shape, he says. He’s tightened his inner circle and has committed himself to grown manhood. He’s ready to prove everybody wrong, not that he really listens to all that noise, and not that what people say about him is true, and besides, he knows who he is.

We tend to overstate our importance, fans and the chattering class. We construct players in our minds and believe, if only on an unconscious level, that’s what they are. This is for our own entertainment more than anything. It’s a lousy epistemological exercise and anyone with a decent sense of self, if they catch wind of us playing couch quack and social media flotsam critic, knows how wrong we are. The modern closeness of fan and athlete is an illusion. That we’re all now amateur public relations flacks for ourselves and that we consume more public relations flackery than ever from players doesn’t do much to help us understand each other, and Dame Lillard is more accessible than circa 1986 Larry Bird only in the sense that you can pipe emoji into his phone.

But there are rare moments when the weight of what we think about an athlete feels almost physical. Around the time we hit peak Dwight Howard antipathy, his back gave out. He hardly played any of his final month in Orlando, where he was a pariah twice over: first, for wanting to leave; second, for curiously opting into the final year of his contract while obviously still wanting to leave. We figured at the time that Dwight’s sideline spell was a precaution. He was going to get surgery and make sure he was completely healthy before an inevitable move in the summer.

Then Dwight showed up in Los Angeles, and he didn’t look right. It wasn’t the strangeness of seeing him in Lakers colors, or the awkward fit next to Pau Gasol in the frontcourt, or that Kobe fixed a scowl on him that never broke. All of those things were disconcerting, but most troublingly, Dwight wasn’t leaping the way he used to, and he got pushed around in the post. His rotations were slower and he got into foul trouble more often. We noticed for perhaps the first time that, huh, he’s actually slightly undersized for a center. He had been so strong and springy before that it didn’t matter.

You could write off the disastrous Lakers year if you were inclined to. Maybe he needed another offseason to heal completely, and maybe Los Angeles hadn’t been good for his psyche. So he fled to Houston, which didn’t work out either. Dwight has spent most of his career importunately lobbying for more touches on the block, but he was at his most sympathetic with one arm above his head as James Harden flamboyantly went nowhere at all for nine seconds at a time. For three years, Dwight waved his hand, rarely got the ball, and nursed injuries.

The pinnacle of his tenure with the Rockets was the sort of noble defeat history forgets. Dwight showed some of the grit his detractors claim he doesn’t have in the 2015 playoffs. He played three rounds on one-and-a-half legs, subsisted on garbage buckets, rebounded like he was still living down the road from Disney World, and labored to cover for Harden’s shoddy perimeter defense. He was as heroic as he’d been since he baffled LeBron’s Cavaliers back in 2009. It wasn’t enough, of course. The Rockets got halved by the Warriors buzzsaw in the Western Conference Finals. The following fall, Harden showed up for the season gimpy and out of shape, and that was the beginning of the end of Dwight in Houston.

This Atlanta switch is the least bold decision of his now-vagabondish career. The Lakers were supposed to be a superteam. Dwight and Harden were supposed to belong to a lineage of championship-contending guard-center combos. The 2016 Hawks are supposed to die an admirable death in the Eastern Semis. There’s no readily apparent grand ambition here, and there’s an argument to be made that replacing Al Horford with Dwight is a downgrade, especially for a team that values floor-spacing as highly as the Hawks do. Dwight is only 30, but it’s a stiff 30. If there’s a renaissance in his future, it’s going to be one in which he finds inventive ways to work within his limitations. That hurricane of a paint presence is gone forever.

Does he know this? He might finally have figured it out. The retreat to Atlanta indicates as much. Having invited attention both with his play and personality, and having failed several times to reach the heights he aspires to, Dwight has joined a team that should be pretty good, but who aren’t all that ambitious. He won’t get covered as thoroughly or as harshly as he was in Los Angeles or Houston, and it won’t be his fault if the Hawks crash out of the playoffs because that’s what everyone already expects. At 30, five years removed from what we didn’t know at the time was his brief prime, Dwight is beaten-down and as low-profile as he’s been since his early days with the Magic. Every professional athlete wants to have his best season yet and changes of scenery are a source of hope and motivation, but you get the sense that Dwight wouldn’t be unhappy if he could lower his stress levels, win some basketball games, and no longer be a regular subject of national fan and media fascination. In that respect, perhaps his homecoming will work out swimmingly. Perhaps he’ll feel, if not well-liked, at least little less of a villain.