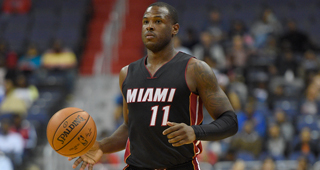 Syracuse University is built on a hill. Locals call it The Hill. It’s late at night, maybe the early morning, and a pack of exultant co-eds are creeping down the incline. At the center of this pack is a car in neutral, Meek Mill bellowing out of its factory speakers, and off that car’s side mirror, walking like an old west gunman beside his horse, is Dion Waiters. He has scored 12 points against Marquette or nine against Georgetown or 13 against Louisville. At any rate, the Orange have won. His people are pushing his chest, cupping his neck, recounting his exploits and flattering him, and he’s staring straight ahead, chest out, muscles flexed, eyes vacant and hard.

This is how I describe the scene, anyway. It’s an image that passed through a couple rounds of edits before it got to me. I have presented it here in the style of the Gospel according to John, emphasizing not necessarily fact, but truth. I grew up 45 minutes from Syracuse. I can confirm the existence of its hill, and several others in the metro area. I have been out in that town’s drinking world and seen its college students. They are capable of rowdy merriment. And I know Dion Waiters like a vet knows a finger he lost in a war. (The bird-giving one, obviously.) Even if this incident never took place, it happened. Mythology is a kind of history too.

It hasn’t worked out the way Dion believed it would, has it? There were the Cleveland years, notable mostly for a surfeit of blowout losses and frequent tussles with Kyrie Irving over offense-initiating duties. Then, after a few months of mimicking LeBron’s pregame stretching routine and perhaps thinking he was the third member of The Big Three everyone was talking about, Dion was sent to Oklahoma City, where mediocre guards go to disappoint Russell Westbrook. It says something about the flat arc of his career that Dion’s Thunder spell was considered a period of growth. He shot 40 percent last season and took nine shots per game. He played some decent defense in the playoffs. Then his contract came up and Sam Presti let him walk.

Dion didn’t get paid during a free agency period in which Solomon Hill pulled down $48 million. He took a meager single-season deal with a second-year player option to play for the Heat, who with Chris Bosh and Dwyane Wade’s exits figure to be a vacant warehouse of a lottery team. The roster is Hassan Whiteside, Goran Dragiċ, and a bunch of youngish guys with varying degrees of promise. On its face, this is just the place for a gunner looking to shake some money out of someone next summer, but it also leaves open the possibility that Dion will shoot himself ever-closer to the league’s fringe. More leaning off-the-dribble jumpers and smothered drives aren’t going to convince anyone that he deserves Connecticut summer home cash.

Of course, neither did the whole doing a job for a title contender thing. The path forward for Dion is exceedingly narrow. If he runs back his pre-LeBron Cavs form, that’s no good for him, and if he fits too congruously with the Heat, that won’t attract the necessary attention. What Dion’s predicament requires is a subtlety he has never demonstrated. He needs to boost his numbers without looking like he’s out for himself. He needs to be assertive without being selfish. On a team that lacks talent, he must play within his limits in order to fill some of the scoring vacuum rather than ballooning in a doomed bid to fill all of it. This might persuade some mid-tier franchise’s front office that he’s expensive sixth man material, and even still, he is Dion Waiters: his name might have stains too deep to scour clean.

So this is a 24-year-old guard no one knows what to do with at a crossroads. Dion can reform, tamp down on his worst tendencies, excise that stepback 19-footer he likes so much from his game, cut down on the on-court face-scrunching, and generally try to be as employable as possible. Or he can sing the song of himself, display to the the world an extravagantly ugly array of drives and isolations, put up a percentage that starts with a three, start a feud with Dragić, and offer a come-and-get-me plea to the Sixers by early February. The former might work, but it would be Dion obliterating the rough edges that make him an interesting figure. The latter would be indulgent and relentlessly miserable, but Dion has a curious gift for making misery seem goofy and ecstatic, in the same way he makes success look like glumly waiting in a doctor’s office reception room.

There’s no perfect way out of this, but it is a poignant conundrum: what does a player do when given the choice between acceptance and self-expression? More to the point, will Dion Waiters stay burnishing his myth, or is it time he joined reality?