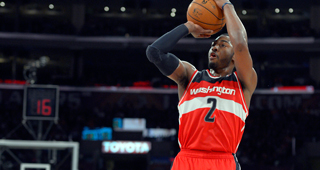 We know how it has happened in some detail, because we’ve seen the games, but it’s puzzling in the abstract that a franchise that’s had the privilege of employing John Wall for the last six seasons would find itself in the grip of a deep malaise. The Wall-era Wiz haven’t ascended far past the modest peak the team hit when Gilbert Arenas was pioneering the zero-guard, and they don’t figure to this year, either. Bradley Beal has four seasons of promise and extended injury breaks on his record. Marcin Gortat is productive, but there’s something vaguely fragile about him. Markieff Morris is unquantifiable as an off-brand Carmelo Anthony with Latrell Sprewell’s temperament. It speaks to the squad’s middling potential that the organization couldn’t even get a meeting with Kevin Durant this past summer. The Wiz aim to be something like the fourth or fifth-best team in the East. They could upset the Celtics or Hawks in the playoffs, but they top out at getting shellacked in the Conference Finals.

Washington has at least shed Randy Wittman, he of the permanently flummoxed visage and hilarious whiteboard confusion. Wittman was slightly more tactically astute than his caveman accountant look suggested—he did a nice job managing a basically dead Paul Pierce two years ago—but he also employed an offense that seemed to create difficult 17-footers on purpose; he rotated with little discernible logic; he was hopeless with in-game tweaks. Last season’s backslide had more to do with Beal’s injuries than Wittman’s haplessness, but the Wiz did well to get rid of him anyway.

To replace Wittman, they brought in Scott Brooks, which is —[the sound of air getting sucked through teeth]—fine. Ted Leonsis and Ernie Grunfeld apparently moved quickly on Brooks specifically so as to make sure he wasn’t snapped up by the Minnesota Timberwolves or Houston Rockets, who ended up hiring, respectively, the guy who invented modern NBA defense and the guy who ran the best offense of the past 20 years. Leonsis cited Brooks’s win-loss record at his introductory press conference, which did nothing to ensure Wiz fans that Brooks wasn’t brought on board primarily because he was in charge of a team that had Kevin Durant and Russell Westbrook on its roster. Brooks isn’t a bad coach, but does anyone outside the Wizards front office believe he can be a great one?

The Wizards are discouraging through some fault of their own, but they’re also discouraging because they’re emblematic of a broader, irksome problem, which is that the East, dating all the way back to the days of Jordan’s dominance, only ever seems to have one, maybe two, title contenders. Damn near the whole conference is a middle tier. Eight teams won between 41 and 48 games last season. The only ones to top that figure were the Raptors and Cavs. The West, by contrast, was much more sharply stratified, with the Thunder, Clippers, Spurs and Warriors all winning 53-plus and six teams finishing at or below 33 wins. The extended middle tier problem might visit the West this upcoming season too, considering the Dubs have summarily destroyed the Thunder and the Spurs seem like they’re a Popovich scowl away from a significant retooling.

There’s nothing wrong with a team finishing a few victories north of .500—that’s a lot of nights on which fans get to see their squad win—but when a conference or even an entire league trends toward extreme parity, it becomes a predictable, mediocre drag. The Wizards have belonged to a glut of just-okay teams for a while now. There are specific reasons for this and yet the irrational part of the otherwise sober basketball fan howls: Jesus, you have John Wall! You are wasting his time! Get your house in order and compete for something!

This is, obviously, easier said than done. Paying Ian Mahinmi $64 million over four years, even in an inflated market, doesn’t help, but the Wiz had no moves available to them this past offseason that would have launched them into the Cavs’ stratosphere. Maybe, if Bradley Beal can play 70 games and develop an understanding with his backcourt-mate; maybe if Otto Porter and Kelly Oubre are the sort of defensive havoc-wreckers they’ve only hinted at becoming; maybe if Markieff Morris can keep his head; maybe if Wall finds yet another level as he approaches his late 20s; maybe if Scott Brooks comes up with some medium-inventive stuff, the Wizards can win 55 games and push LeBron and company in a playoff series.

But nothing ever breaks so perfectly. The Wiz are staring down another season climbing then sliding down the slippery walls of the East’s deep middle. They’re trying like hell, and they’re probably as frustrated as the onlookers, but who knows if they’ll ever get out.