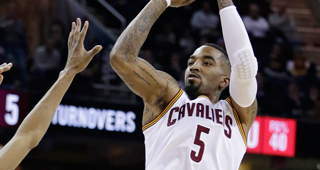 February 22nd, 2006: J.R., in his second NBA season, having fallen out with Byron Scott, endures an extended benching. After a six-point loss to the Jazz, J.R. is asked whether he’s surprised he didn’t play at all. His response: I wasn't surprised at all, because [Scott’s] ego is too big to put something petty aside and try to win the game.

December 16th, 2006: Late in a blowout win over the Knicks at MSG, J.R. is clobbered by Mardy Collins on an open-court drive, gets up hollering, and starts a brawl that includes Carmelo Anthony sucker-punching Collins and J.R. tackling Nate Robinson into the crowd along the baseline. For this, J.R. gets slapped with a ten-game suspension.

February 7th, 2007: With Melo riding shotgun, J.R. gets into a minor traffic accident that causes both players to miss a pregame shootaround. This isn’t a big deal by itself, but both players are on thin ice following the rumble at The Garden.

April 30th, 2007: With the Nuggets down four and 26 seconds to go in a first-round Game 4 against the San Antonio Spurs, J.R. launches an ill-advised three. He apparently breaks a play that was designed for Allen Iverson. I just love the dignity of the game being insulted right in front of me, George Karl says afterward. The coach sits J.R. for Game 5 and the Nuggets lose the series.

June 7th, 2007: J.R. runs a stop sign near his hometown in New Jersey, strikes another vehicle, and flips his SUV. One of his friends, Andre Bell, dies two days later due to head trauma sustained in the crash. J.R., who has a slew of traffic violations on his record already, eventually pleads guilty to a reckless driving charge stemming from the incident and serves 24 days in jail during the 2009 offseason.

October 20th, 2007: The Nuggets suspend J.R. for three games after he’s involved in a fight outside a nightclub called The Rockstar Lounge. A public relations flack wearing a J.R. mask apologizes and vows to learn from this situation.

August 5th, 2009: Not long after being released from jail, J.R. gets in hot water for replacing Cs with Ks in his tweets, which is something Bloods do. J.R. grew up in the suburbs. He deletes his Twitter account.

September 14th, 2011: With the NBA headed for a lockout that looks like it might last an entire season, J.R signs a $3 million deal to play in China with the Zhejiang Golden Bulls. When the lockout concludes in December, J.R. is stranded in China due to there being no opt-out in his contract. He plays for the Golden Bulls until the Chinese Basketball Association’s regular season ends in February, then joins the Knicks.

March 9th, 2012: J.R., back on Twitter under a new handle, sends out a picture of a large-assed woman lying in front of him on a hotel bed in a thong. This woman is Joe Budden’s ex-girlfriend. J.R. cacklingly belittles Joe Budden, doesn’t apologize because he shouldn’t, gets fined $25,000 by the NBA.

May 25th, 2012: Miami police haul J.R. to jail because there’s an outstanding bench warrant for his arrest due a minor offense committed a year previous: J.R. was operating a motor scooter without a license in the July of 2011, was ordered to stand trial, and didn’t show up for his court date. J.R. is promptly released on bond.

January 26th, 2013: Not messing around re: the female company he intends to keep later in the night, J.R. exchanges brief pleasantries with a woman who will be attending his game before asking: you trying to get the pipe?

September 6th, 2013: J.R. is suspended for the first five games of the regular season for violating the league’s substance policy. Basically, he was smoking weed in the offseason and flunked a pee test.

January 8th, 2014: Bored on a mediocre Knicks squad, J.R. is fined $50,000 by the league for, in two consecutive games, trying to untie opponents’ shoelaces while they weren’t looking. Mike Woodson benches J.R. for the following game.

April 6th, 2014: In a meaningless game against the Heat, J.R breaks the NBA record for three-point attempts, seemingly just for the hell of it. Not for nothing, he makes 10 of his 22 shots from beyond the arc.

January 7th, 2015: In a three-team deal among the Cavs, Knicks and Thunder, J.R. ends up in Cleveland. The Cavs are really after Iman Shumpert in the trade, but they take on J.R. as a kind of Shump Tax because the Knicks are sick of him.

April 26th, 2015: With the Cavs on the verge of a sweeping Celtics in the opening round of the playoffs, Kelly Olynyk pulls Kevin Love’s arm out of its socket. Later in the game, J.R. flails on a rebound and cracks Jae Crowder in the face. He’s ejected from the game and suspended for two more.

June 16th, 2015: The Cavs lose in the NBA Finals to the Warriors. After the game, J.R. is seen riding a Phunkee Duck through the halls of the Quicken Loans Arena, looking dejected and drinking a Coors Light.

June 19th, 2016: The Cavs beat the Warriors in the NBA Finals. J.R. chips in 12 points in Game 7 and spends most of the contest guarding either Klay Thompson or Steph Curry, who shoot a combined 12-for-36 from the floor. At the post-game press conference, he breaks down crying when asked about his father: I’ve been in a lotta dark spots in my life, and if it wasn’t for [my parents] I wouldn’t be able to get out of ‘em... they fought with me, they yelled at me, they screamed at me, they loved me, they hugged me, they cried with me... the cars is nice, the houses is nice, but none of this matters without them... if it wasn’t for them, if it wasn’t for the structure and the backbone that I have, I wouldn’t be able to mess up and keep coming and being able to sit in front of you as a world champion.

But you don’t need fixing. That isn’t possible and besides it suggests that being damaged and being you are two separate things, as if you should be ashamed of the part of you that hurts, or lashes out, or can’t make sense of the world. No, you are your flaws and you are all of the things that people like about you—you’re charming, you’re generous, you’re talented, you’re fun—and living is figuring out how to rely on what’s good about you while working on what’s bad.

J.R. Smith is 31 years old. He’s a not a screw-up or a clown or a locker room cancer or a jerk or a fraud or a lunatic or a dolt. He’s a man with regrets, and he’s better today than he has ever been before: a world champion with a contract that’s going to put his grandkids through college. You don’t need to change yourself to succeed. You must be who you are, as best you can.